Geoff had asked that we were left this morning, so we slept in until 7.30 am far more civilized! We watched the boat leave with another jungle experience, but we had already decided that we were all jungled out!!

We went on top deck and had our morning tea, I still feel a bit weird, so 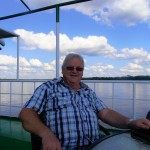 Enjoying the trip down the river on our own.

didn’t want breakfast at this point, we slowly came around and at 9am had our breakfast, I had boiled eggs, and Geoff had omelette, very nice it was.

We stayed on deck for a while then went back to have another sleep, I think we are both totally exhausted, too much sun, and too much chasing.

The boat started moving and  then had to stop suddenly apparently it has lost one of its propellers, so they sent all the crew to look for it, three canoes, with five men, then the big one came along and helped also, although they did not find it.

The Captain decided to go on one engine, which was fine for a while, then we went aground, very exciting, they had to get the large canoe to try and dislodge it which they finally did. 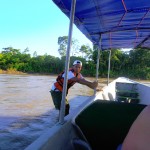 Canoe getting stuck because of the lack of water

The level of the water has gone down 3 metres over three days, so the channel has changed, very difficult to navigate.

When everyone was back on board we had lunch, I did not eat much, just some soup, and a little bit of lettuce, should lose weight this week!  I am not very keen on the food here, it is a bit weird.

In the afternoon the trekkers went off again, and we had a nice afternoon cruising the river, apart from having to avoid all the trees that have gone in the water,  it was very pleasant.

We had a quiet dinner, and an early night.