The overnight rain had stopped by the time we had breakfasted and we headed for Llangollen. This part of the canal is a little on the narrow 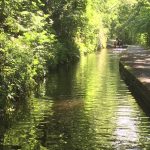 side so passing had to be done with caution but there were two sections about a mile long where it is only wide enough for one boat so somebody has to walk ahead to ensure there is no other boat coming the other way. We were very fortunate, we caught up with a hire boat with a family aboard and the wife, younger and fitter, did the running ahead, phew. Heading through these narrow channels is hard going as the 2-MPH current increases and poor Meg A Star struggles which forces us to rev engine at a higher rate than we want, still when we return we will wiz along.

The more we do, the more we are amazed at the feats of engineering that took place here back in the 1700’s; here we were cruising through a canal that was hacked out of the hillside rock, no wonder it is 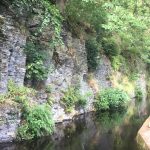 Narrow canal cut out of the rock.

narrow.   When we arrived at the end of the navigable canal there was a CRT owned marina where we moored; it was £6-per night including hook-up, cant be bad.

Llangollen apparently takes its name from the Welsh, meaning “a religious settlement” because a monk, later known as St. Collen, founded a church next to the river Dee in the 6th-century. The town today is a bustling tourist destination with the canal, the heritage railway and the river Dee with its kayakers riding the rapids, though there weren’t 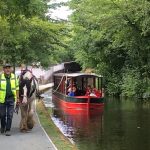 We could have taken the horse drawn carriage

many rapids around currently. We made the effort and walked the two miles to the head of the canal where Thomas Telford 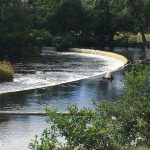 built a “J” shaped weir that controls the River Dee levels, and supplies water straight into the canal system. It is no wonder there is a 2-MPH current flowing down the canal!!!!! The return journey was interrupted by a pint in the hotel with 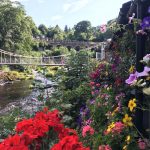 Hotel with chain bridge in distance

beautiful flowers and built next to a very unusual historical Chain Link Suspension Bridge. We did over 12,000 steps today, that should have seen off our drinks!!!! 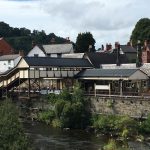 replace the previous bridge built around 1345, though this also replaced an even earlier one built by Henry 1.

Next morning naturally, we had to take a ride on the Heritage train. The railway track follows the river through the Dee valley, stopping at a couple of stations en route and arriving at a temporary station on the outskirts of Corwen, a small 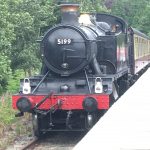 “unassuming” town that had a café that did superb bacon rolls (yum yum) and a barber where I had a very good haircut. Oh yes there was an interesting Norman church that had a 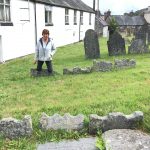 number of kneeling stones. These are stones placed near graves where the mourners can kneel to say prayers over the graves of the departed; apparently this is a local tradition only to be found in a few churches in this area.  There was also an “old work house”, the 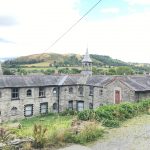 complete original building in the shape of a cross so that the inmates can all be separated. Men and women that were fit enough to work lived separately in two 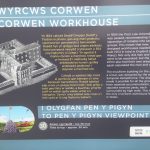 blocks, and men and women that were too old to work lived separately in the remaining two blocks. Today the workhouse has portioned into small units.

Apart from the aforementioned, today Corwen is best known for its connections with “Owain Glyndwr”, who in September 1400, 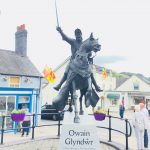 proclaimed himself the “Prince of Wales” and started a Welsh revolt against King Henry IV, seeking independence from England; where have I heard that before!!! By 1409 it was all over and he departed this world soon after in 1415. 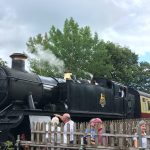 We returned to Llangollen in the old British Railways rolling stock, pulled by 1934 medium sized locomotive (5199) taken out of service in March 1963. The Loco is owned by the Llangollen Railway, it has been an overhauled, completed in 2014 and now pulls one of the heritage trains several times a day to Corwen and back, a 20-miles round trip.

The day ended when I tried to light a “throw-away” bar-b-q and failed, so had to resort to the grill; I must get a gas one!!!!

As a matter of interest, to-date we have covered 574-miles and have been through 451-locks, how time flies.