The alarm went of at that un-godly hour of 0600hrs, as we were being collected from the hotel 0800hrs and we did have to enjoy our last breakfast, though I have to say, when the breakfast room opened at 0700hrs, the rolls and croissants had just come out of the oven; this dispelled the rumour that they were stale later on during breakfast time.

Being the last day of this bank holiday weekend, the roads were again empty, and we made very good progress to the International airport. Our guide walked with us to check-in; no queue as were early, and our two main cases went through at the upper limit with no charge. The girl behind the desk then started to say we had too much cabin baggage but our guide dealt with that and we were on our way, a result with no additional charges. Our guide then left us as we went through to Emigration. Going through security checks and scanners was a doddle, again straight through, “and” they let us take bottles of water, much more relaxed than Europe and the US.   We soon found our VIP lounge and settled down for a bit of a wait with coffee and, no, not Brandy, I had to make do with Whisky, oh dear. 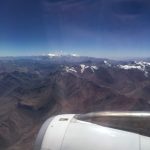 Flying over the Andes

Our flight was called, we boarded with minimal fuss, and perhaps Easy jet and Ryanair could learn a thing or two from the way things are organised, here in South America.

We left right on time, and the 1hr 45-minute flight was very comfortable and very dramatic as we went across the Andes Mountains. Once over, we dropped down quite suddenly into the bowl that Santiago is built in. 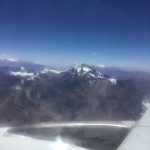 Spectacular views of the Andes

Going through Immigration was straightforward and when we arrived at the baggage caracal, our cases were there; that’s a first too! Not only were our cases waiting, as we walked clear of customs our driver was standing with our names on his board and we were whisked straight to his car and taken to our hotel. This hotel, “The Atton El Bosque” is a far cry from what we left in BA, far superior and no doubt it cost us much more.

After settling in it was late afternoon so we had a wander around and really fancied something “cheesy” to eat.   After consulting Google Maps, we fell upon a KFC, now it’s not quite

what we expect in the UK but still it was rather nice for a change. Tomorrow we will decide what to do, and when to do it, but tonight we enjoyed a quiet drink in the hotel before bed.

Up bright, but not too early and down to breakfast, again rather different to the breakfasts we had in BA.

Around the corner from our hotel is the “Costanera 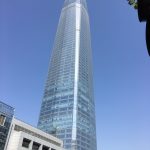 Centre”, this building is a commercial and business complex with a 6-floor shopping mall; 2-high-end hotels; and an offices. The building is 300 meters high making it the tallest building in Latin America, and the second tallest in the southern hemisphere, the tallest being 322 meters in Australia. The shopping mall opened in 2012, and is reputed to be the largest in South America.

After breakfast we headed down to the Costanera Centre, naturally to have a look but more importantly we thought we would get answers to our questions: what to do, where to do it, and how we do it. We already knew there was a hop-on, hop-off bus in Santiago but didn’t know where to buy tickets and where it actually went, also, as today is our anniversary, (we met 13-years ago), we wanted to see what restaurants were available for dinner. We were also told its worth taking the lift to the top of the building, but advised to go around 2000hrs to see Santiago, both in daylight and after dark; if we get lucky, we may even get to see a sunset as well.

This shopping Mall is enormous; we were quite taken back and where to start. We asked at Information if there was a ticket booth selling tours etc., only to be told “no”. We hoped our question was lost in translation, as we couldn’t believe we wouldn’t find what we wanted here so started to meander around. We found our way up to the 6th floor where the food hall and restaurants are situated and then we spotted it, a fellow in a hat with “Turistik” on it, so headed across.

He was a very nice young lad, a student halfway through his business degree and no doubt getting work experience along the way, still he was very helpful and we booked a number of things to do over the next few days.

Whilst walking around we came across a “Cinnabon” outlet, and 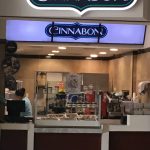 for those who are not acquainted with this brand, all I say is, “You Should Be”. We were introduced to these scrumy buns by my Daughter, whilst she was living in Bahrain, we’ve eaten them ever since, and we did 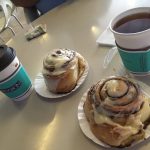 There not fattening honest!

Back at the hotel we went for a swim, before going out for an early evening anniversary meal, Italian, where we went on our 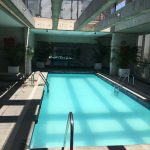 Again by early evening we were shattered, it must be the heat and all the walking we are doing, so another quiet evening.

This morning we are off to catch the Hop-on, Hop-Off bus, the first of the two days we have booked.   We didn’t have to wait too long for the bus to arrive and then we were on our way. The area where we are staying, the newest part of Santiago, it is 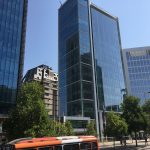 the financial centre with its high-rise office blocks and other buildings and is known locally as “Sanhattan”; a mixture of Santiago and Manhattan

One topic above all others that was talked about, here in Chile, as well as Argentina and Brazil are the celebrations 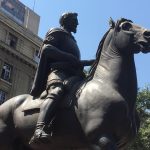 One of the many statues

commemorating the various wars of independence from Spanish colonial rule. Statues, boulevards, and plazas are across the city are named after generals, politicians, dates and battles. One has to feel a little sorry for Spain during the mid 19th century having all these problems!!!!! Chile won its independence in 1818 though it wasn’t until 1844 that Spain actually recognised it.

Today Chile is seen as one of the more prosperous Latin American countries, wealth coming in from Copper mining as well as Agriculture and wine amongst others. With fairly stable government, prosperity can follow; if only other South American countries could get their politics stable, prosperity must follow bearing in mind the natural resources they have, they would certainly give the traditional economies a run for their money. The only issue we could see is the Chilean Peso, the actual exchange rate is 836.70 to the pound sterling, which 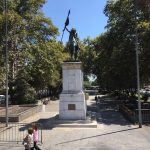 Another General being honoured

gives one a bit of a headache when buying something and converting many 1,000’s at a time; the calculator is constantly in your hand. 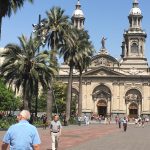 We continued through this very modern and pleasant area of Santiago until we eventually arrived in the old, colonial part of the city. Here we got off and enjoyed a

coffee followed by a couple of wines, sitting in the sun in the “Plaza de Armas”. This Plaza represents the heart of Santiago and is surrounded by many old buildings including the Metropolitan Cathedral, the city hall, the 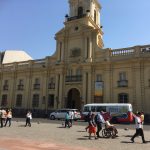 central post office and the Santiago Museum, though this museum building used to be the seat of the National Congress.

When we booked our bus ticket, we were recommended to try a fish restaurant situated in the “Mercado Central de 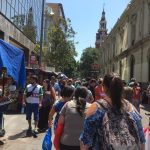 On route to fish market

Santiago”, so after our “sit-in-the-sun” we headed to this old market, which Google Maps told us to was 6 minutes away. This Market building 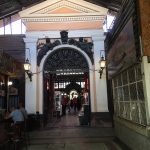 was opened in 1872 and the cast-iron roof structure, fabricated in Glasgow by a company 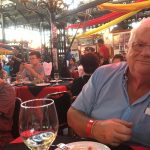 called R. Laidlaw & Sons, was quite a sight. Inside there are numerous restaurants, but in fact they are all called “Donde Augusto”, anyway we sat down; 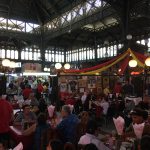 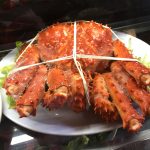 Crab just waiting for someone

and had had fish to eat. The atmosphere in here was vibrant, people coming and going and 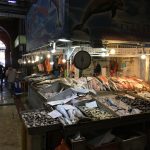 goodness knows how many meals they served in a day. Though the food wasn’t the best we had we were glad we went, well we did at that time. Walking back along a busy pedestrian precinct with a 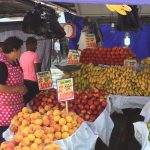 Fruit market in the street

few stalls and numerous vendors with their wares spread-out on blankets, minding our own business when I hear a quiet scream from Christine, I turned 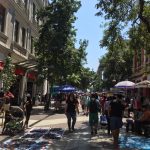 So many people around, it happened so quick, I was gutted, my birth stone given to me by Geoff

round but too late, somebody had tried to grab her bag, had no luck, so ripped her necklace off instead. It happened so quickly, before we could react the lad had 10-meters on us, no chance to catch him; and Chile is supposed to be a safe country, un-like the other places we have visited, still our consolation is that the necklace was “costume Jewellery”; he won’t get fat on that!!!!! Christine was very relieved and glad she’d left her proper jewellery at home.

Back on the bus and we continued ‘till we arrived back at our stop so without sufficient time to go round again, got off and walked back to the hotel to re-group.

Our rest, in the hotel room was so good we didn’t venture out again; oh where has all our energy gone?????