The Panama Canal & another sea day.

There was great excitement on board this morning as there are may folk who haven’t transited the Panama Canal and they were up early to be in position to see everything. We weren’t in any hurry; we decided to get up after our tea in bed, and when we were ready, go to breakfast. Because we had been through the 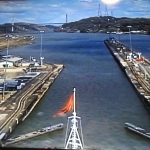 same way only a few weeks earlier we didn’t feel the need, and we had also both been through the Canal back in 2014. 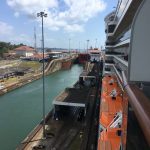 A big tanker was in the other locks with us

The one new thing we did see was a tanker using the new cut. This was part of the expansion project; new bigger locks and a new channel, built during the last few years enable much larger ships to travel through the canal. 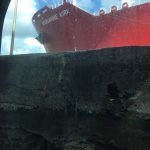 Looking up on the tanker as we were going down

I have to say though, this may be “old hat” but I still marvel at the engineering that took place back in the early 1900’s to make this short cut between the Atlantic and Pacific possible.

Today we had arranged with our friends, Dave and Elaine, to meet for lunch in the Golden Lion pub for a Ploughman’s and a couple of pints. What we didn’t realise was that this pub has a fairly extensive “pub Grub” menu so no doubt we will 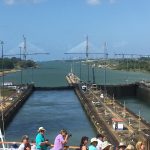 Last lock with unfinished bridge in the distance

re-visit some time. Fortunately we were by a window so could keep an eye on proceedings, as it was Dave and Elaine’s first transit and they didn’t want to miss anything. However, the two girls went off to watch proceedings on deck whilst Dave and I enjoyed an extra couple of pints; real ale too. I think Dave did get out in time to watch the Q V go through the last lock and into the 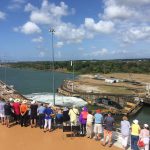 Water emptying out of the locks

Caribbean!!!! Transiting the 48-mile journey can take anything up to 9 hours, and today was no exception.

Tonight there was a bar-b-q outside the Lido buffet on the stern pool deck; This Bar-b-q was well attended and finding a table was a bit difficult, still the four of us managed and continued having a good time.

After the bar-b-q it was time for the evenings show. Tonight the resident singers and dancers of the Queen Victoria entertained us.  The theme of the show was the Movies, and it was a very slick and an entertaining extravaganza, covering most of the silver screen musicals over the years. It was excellent and we wonder why the ship doesn’t put more of these types of show on.

We have another sea day tomorrow.

After the excitement of the Panama Transit, we are back to a normal sea day with the various activities around the ship, including lectures. There were two I went to, one was a potted history about South America and how this continent, being a mainly Spanish, managed to fragment into numerous countries. But the first lecture I went to was nearer to home, and was fascinating.

The lecture we attended was called, “The Impossible Dream” it was about the Wilts and Berks Canal; a canal I hadn’t heard of before, though no doubt canal aficionados will know all about it. This canal was opened in 1810 and linked the Kennet and Avon Canal to the river Thames at Abingdon and there was also a link to the Thames and Severn canal near Cricklade. In 1914 there was an act of Parliament that killed off this disused canal. The reason this lecture was called the “Impossible dream” is due to the fact that much of this canal has been built over; filled in, and many structures such as bridges and locks, destroyed. However, a number of canal volunteers have set up a charitable trust and in partnership with the appropriate councils, land owners and other bodies have set about bringing this canal back to life. Where the original canal has been built over, alternative routes have been found and the trust is well on its way to making the impossible, possible. This was a fascinating and informative lecture, which we both enjoyed.

After lunch, before we did the usual, sun bathe and swim etc., but first there was the ships annual tug-o-war competition. 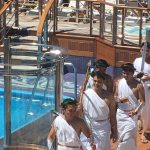 Team from the dinning room, wrapped in table cloths

Teams from each department competed for the coveted Cunard trophy. Last years winners, and defending champions were the “bar staff” and obviously everybody wanted to topple them but there was only one other 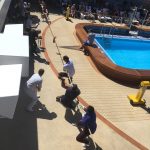 Everyone entered into the spirit, so funny

“tough” looking team, and they were the engineers. The final between these two teams was nick and tuck but the result 2-to-1 went to the bar staff; they retained the trophy for another year.   Alongside the men’s teams, there were the mixed teams and the winners in this 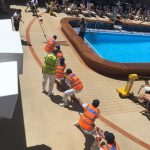 A good day was had by all

category were the “Pursers Office”, though the singers and dancers gave them a run for their money in the final.

We had to get back to the cabin a little earlier than usual this afternoon, as tonight is another “formal night”, best bib and tucker and all that.

As usual our table gelled and we all had a good laugh with much micky taking by everybody. After dinner we made our way to the theatre to see the MacDonald Brothers for their second show. Their performance was again lively with a variation of music, again very entertaining.

After the show, Christine joined Dave and Elaine for a stroll around the deck whilst I enjoyed a pint of ale; thirsty work listening to Scottish performers.