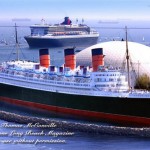 The Queen Mary in Long Beach

Today is nice and sunny so we booked a tour of the Old Queen Mary and then followed this by a self guided audio tour, both covered different parts of the ship, however the guided one we paid extra for but the self guided was included in the room rate: difficult to decide which was the best! 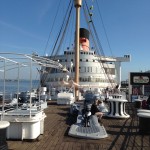 A View Looking Back from the Bow

For the stasticaly minded, here are just a few facts of the old girl:-

We were walking up and down the ship, up and down stairs several times on the two tours which lasted for a little over 3 hours, we were thoroughly worn out by the end but we both agree it was worth the effort. 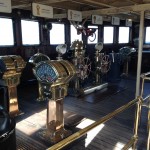 and everywhere in between, compared 1st class amenities against 2nd and 3rd, how the rich and wealthy lived!!!

One striking fact was the intolerance the first class passengers had towards the 2nd and 3rd class, never the train should meet, not very PC in the current times we live but we must not forget how life was when she was built in the 30’s. 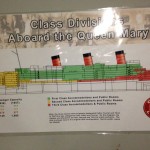 It is the history, coupled to the fact Long Beach has coupled her up to a sort of amusement park with skating rink, Russian Submarine and various  “British buildings” and red telephone box’s that draws people here.  This ship solely as a hotel would not draw sufficient guests and this is proved by the fact the “hotel” has been made bankrupt 5 times since arriving here in Long Beach, just south of Los Angeles in December 1967. 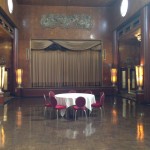 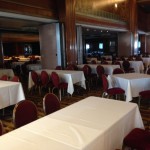 To be fair, the Long Beach owners have tried to keep the ship in as much as the original state as is possible but with lack of funds she looks very tired both internally and externally.  I suppose that it is still cheaper to keep her going as an attraction as it would be to scrap her.  She is moored alongside and though still floating, they have built a long breakwater out of large rocks her whole length; she is stuck in!!! 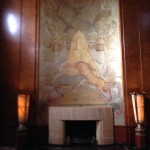 This queen’s other main claim to fame is her part during the war, she was a major troop carrier and because of her speed was far too fast fo any 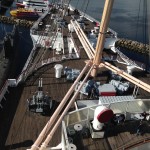 German “U Boat” to catch.  Apparently  Hitler knew this and offered untold wealth plus the Iron Cross to any U Boat captain who could sink her, no one came near to doing so.  This Queen also holds the record for carrying the most human beings on any ship, over 16,000 soldiers plus the crew.  She also held the blue ribbon until 1952. 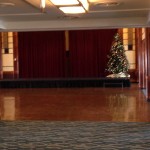 Everyhere you walk there are pictures of the rich and famous aboard her but I couldn’t find one of my Brother who sailed in her from Southampton to New York  in 1950.  It was also aboard that Winston Churchill signed off the D day landings plan and naturally there is the Winston Churchill suite though we couldn’t see in. 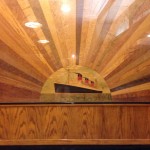 Samples of all the wood used on the queen Mary

All the timber used in the building of this ship came from every one of the countries in the British Empire, which of course we stil had in the ’30s.  When John Brown & co’s buildings were being demolished on the Clyde, they found samples of every piece of wood used on this ship so they made up a beautiful casing showing off the different wood and presented it to the new Ship’s owners and it is on display in the main concourse.

What the future holds for this once majestic ship, who knows, but I hope she continues flying this piece of British history, we don’t want her burnt out and sunk, as happened to the original Queen Elizabeth in Hong Kong harbour.

After this exhausting “walk-about” we jumped, well crawled, onto the free bus and went to the other side of the waterway to have a meal, we were hungry as we had only had 1 “cupa” and a bun and now it was about 1430 hrs!  We ventured into a restaurant  called “The Yard House”, it was very busy so assumed it was good, so good I fact they had Guinness on draught, wonderfull.  We had soup and a couple of Chesee Burgers with the usual trimmings.  My soup, Clam Chowder was hot and excellent, 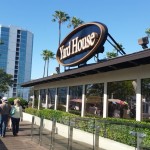 Christine’s Soup was cold but delicious.  Our burgers were ordered medium rare, they arrived “murdered”, still we were hungry and they were very busy so just got on with them washed down with another Guinness and Bud for Christine.  We asked for the bill, Christine had to go you know where, the bill arrived, $45 plus tip, so to save time I went inside, (yes we enjoyed eating outside in the warm sun) and met up with Christine at the till. The lady on the till asked if everything was good, well no we said and told her our issues.  Our bill was reduced to $13, no tip,  there has to be a message to be had here!!!!!

We jumped back on the bus and went to Wallmart for a few odds and ends, including a couple of buns for breakfast, not included here.

Back on the bus, back to the hotel, have a quick cup of Coffee and Tea then write the log and prepare for our trip on public transport to get our Amtrak train to Chicago Tomorrow.