As with our last visit to this hotel in La Spiezia, parking was an issue that had to be addressed; so I was outside at the parking ticket machine at 0800 hrs to ensure we had paid and so avoid a ticket.

A nice breakfast set us up for the day and having paid the bill left but not until we had visited a supermarket to buy some wine.  Unfortunately, at the supermarket and looking at the wines available we weren’t too sure what to buy.  Originally we were going to buy a couple of dozen bottles for the Bodega, but not having tried any of these on display, we walked out with only 4 bottles, what a disaster!!!!!

We were on the road by 10.00am, hit the Autostrada and headed for France.  Christine had booked an overnight hotel for us in Avignon so 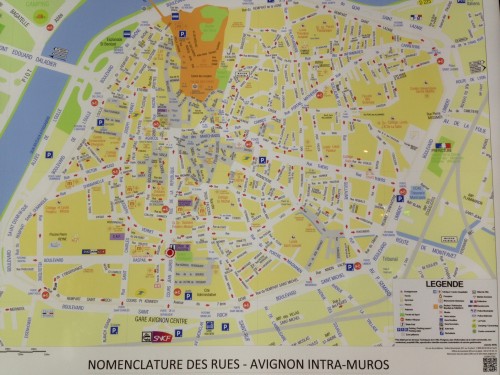 Map of the walled Old Town of Avinnon

thought we could get there in time to have a wander around this lovely wall city.  Having had a good breakfast we only needed to stop for a “cuppa” and a bun and treating ourselves to a nice French meal in the evening.  Booking a 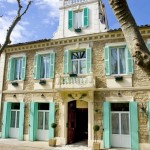 The Entrance to our Hotel, at the back of the building

Hotel on the web can by a little like putting a wet finger in the air unless you go for an expensive hotel, we didn’t, we went for a typical French family run hotel.  Tom Tom took us straight to the door and our chins dropped, oh God where have we booked into.  The building was on the street, adjacent to the main train line and just before a tunnel, we debated wether to go in or go on but as we had paid, we decided to go in.  To 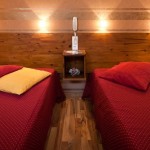 get in we had to drive down the side of the building, under an arch which opened into a car park, the car park was beside a small garden with tables and chairs outside and the main entrance to the hotel.  Now this put a new light into the proceedings and with a little trepidation, walked in only to be greeted by shortage jolly man who couldn’t have been more helpful.  He showed us to our room, which fortunately was on the ground floor; Christine was still suffering with her ankles!  It was a very comfortable room, two small doubles, tables and chairs and a bottle of the local Cote du Rhone wine as a present.  The shower room was a little cramped but one is not using this all the time.  By now we were comfortable with our booking so quickly sorted ourselves out and we headed into the walled city which was about 5 minutes walking, a very convenient hotel for the old town.

By now we had decided that this would be our last night , we would do the full drive back home tomorrow so tonight we would push the boat out, 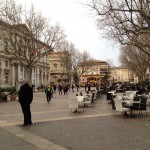 The Main Square in the old Town of Avignon

Firstly we wandered around the square looking at the various restaurants, weighing up all the options then before it was dark walked to the old Pop’s Palace, after all having been to the Vatican, we had to see where the pop’s lived. 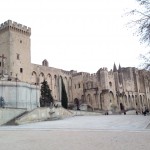 The Front of the Pops Palace in Avignon

The Pops lived in Avignon from 1309 till 1377, this came about because in 1305 Pope Clement V was elected and being French, declined to move to Italy. and in 1309 moved his  total Papal Enclave from Rome to Avignon.  A total of 7 Popes reigned in Avignon; all were French until Pope Gregory XI moved the whole court back to Rome., officially ending the Avignon Papacy.

We now know why the “Chateau Neuf Du Pape” wine bottles always have a bishop’s mitre designed on their bottles.  It all 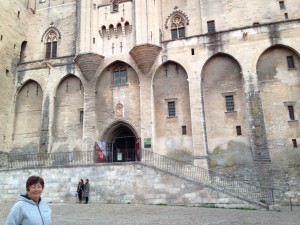 Christine outside the front door of the Palace

started because one of the Pop’s, John Paul XXII, built a castle in the area the wine produced in the immediate area, became known as Chateau Neuf du Pape, one of our favourites. 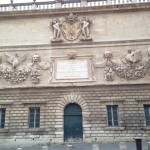 An Ornate Building opposite he Pops Palace

between 1177 and 1185  and used to cross the Rhone, and we all know the famous song, Sur Le Pont D’Avignon!!!!   Today there is only part of the bridge structure left, but parts are open to visitors.

After mooching around the old town, we stopped for a couple of aperitifs before deciding on which restaurant we would visit. 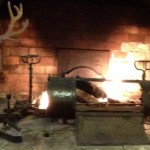 The Big Fire in the Restaurant

At the top of the square was a hotel and their menu looked delightful and the restaurant looked very inviting with a big log, well gas powered, fire, exposed beams and nice stone walls, very old.

We ordered for Christine, Calf’s Head, not really knowing what was coming and I had snails for starters.  The Calf’s head turned out to be sort of small steaks, a sort of brawn I think, still it was all eaten by Christine so couldn’t be that bad!!!!  For mains Christine went for Duck Breast and had 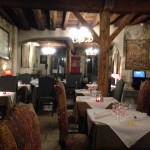 Rack of lamb, we both followed with Local cheeses, excellent but uncomfortably full.  All this was washed down with both local white and red local Cote du Rhone Wines.

A leisurely stroll back through the town to our hotel and away with the fairies after what was a memorable French meal of the highest quality. 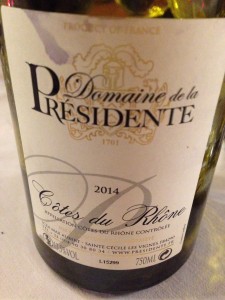 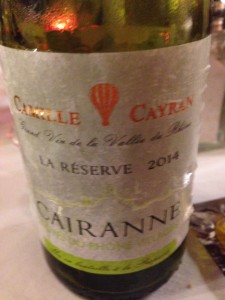