In the winter of 2006, we first came across ‘Anam Cara’, but we could not afford her at the time, Geoff had his house to sale, I had ‘Annie’s Girl’ to sell, and having just bought our house in Spain, we thought we cannot do this.(Financial Suicide)

In the spring of 2007, we heard ‘Anam Cara’ had been sold, we were disappointed, especially as Geoff had now sold his house.

In August 2007 we started looking at boats again, even though I had not sold my boat, we had decided that although we could not afford it, with Geoff and Jane having been told they had cancer, life was for living, and to go for it. We looked at all the websites, and there she was our ‘Anam Cara’ we could not believe it, so by late September 2007, she was ours.

Now for the name change, we did not know what ‘Anam Cara’ meant, but the name did not do anything for us! until we read that ‘Anam Cara’ is a rough translation in Gaelic for ‘Soul mate’ and that is exactly what she is to us.

Thank you ‘Anam Cara’ for taking care of everyone on this trip. Christine 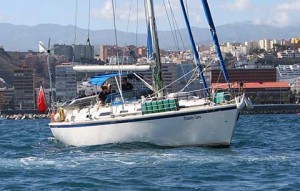 We were relaxing in Spain, keeping Anam Cara clean and polished waiting for buyers to appear but unfortunately, one of the first things that vanish in a recession are buyers of expensive second hand sailing boats. We did of course recognise that being 20 years old there was wear and tear to her soft furnishings and woodwork etc., but as far as we were concerned this was all taken into account in the asking price.
We were enjoying another sunny Saturday morning when the door bell went and standing outside was the Marina Manager, unusual we thought! “I have some bad news for you” he said, “Anam Cara sank on her moorings over night”, “what happened” we asked, after all we had only been on her that Friday afternoon and she was fine then. Apparently he had tried to ‘phone us but we had changed our telephone numbers and we had forgotten to tell the marina. The Marina had already organised the local Fire Brigade to come and pump her out, this had all been completed by the time we arrived. The Firemen discovered the distributer valve used by one of the pumps, either as a deck wash or an auxiliary bilge pump, had been turned, thus allowing sea water to flow in.
When we went aboard we could have cried at the state of our beautiful Anam Cara, our “Soul Mate”. The boat had fortunately been saved from sinking right under due to her sitting on her keel, but this still meant the water was about 2 feet high above the saloon floor. The mess was unbelievable, not only dirty harbour water but there was some oil in the sump below the engines, a residue of the last oil change, which compounded the “messy” problem.
We had a visit from the Police who concluded she had been broken into by vandals and gave us a Spanish “Denuncia” or Spanish Crime report, this we needed to make an insurance claim.
We hear in life that problems are actually opportunities and so this sinking turned out to be a great opportunity for us.
With the Insurance money we replaced all the soft furnishings, electronics, and batteries, re-conditioned the engine and gearbox and finally have all the woodwork cleaned up and re-varnished. Anam Cara looked a picture.
Once completed John Rodriguez Yachts, our broker found us a fantastic prospective buyer who was told about the sinking etc., but being an experienced sailor, very quickly realised what this meant. The buyer had the opportunity to buy an excellent, proven blue water boat that had just undergone a complete re-fit.
We finally completed the deal by the end of June 2001 when the new owners took over as Anam Cara’s custodians; we wish them and Anam Cara well for the future.
We can now move forward to our new adventures, life must move on”