We have nothing planned today, so after a leisurely breakfast and some household chores we decided to head out to the Plaza de Armas, the main square of Santiago, (stop 5 on the hop-on, hop-off bus). How to get there; taxi would have been the obvious choice but no, not for us. We always try and use local transport; it helps us get a fix on the local atmosphere, and 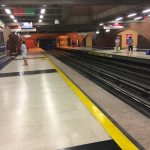 today was no exception so off we went to the local Metro station and after some “interesting Spanglais” we had a plastic “Pip” card, loaded with Pesos and we headed down to catch our train. Fortunately we had a metro map from the hotel, as there wasn’t a metro map anywhere to be seen.

The time line of this metro is quite interesting the original idea was discussed in 1944 but it wasn’t ‘till the early 60’s before things really started to take shape, and the approval 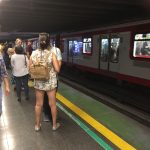 Hate the underground, but hey ho off we go!

was finally given in 1968, 24 years later than was first muted, and in 1975 the first line was opened. Currently there are 6 lines, 118 stations and 74 miles though construction is on going. All the modern rolling stock has rubber tyres and is therefore quieter and more comfortable.

1-change and 7-stations later, we arrived at the Plaza de 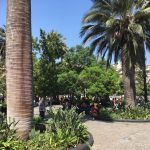 Lovely square with fountains and statues

Armas. It was coffee time, so went back to the same café we’d been to before and as soon as the waiter clapped his eyes on us, we were recognised; we had had such trouble getting our order sorted last time, he wasn’t going to forget “us” in a hurry!!!!

Somebody was telling us that they don’t teach English in schools as a mainstream 2nd language, that’s why so few folk speak it. Portuguese is their 2nd language and we can understand that, as only Spanish and Portuguese are spoken on the South American continent.

Today the temperature is about 40-degrees so siting in the shade was the best place to be and whilst enjoying our rest, got chatting to another English couple holidaying in Chile. He had been an RAF Hercules pilot at the time of the Falklands 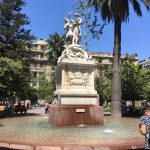 One of the fountains in the square

war, so was very familiar with this part of the world, the history and politics of 1982; I would have loved to have been able to spend more time chatting and find out more but we had to get on.

We wandered around the square on this second visit, but had 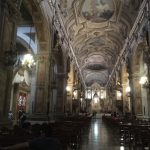 more time today to enjoy it. We went into the “Cathedral Metropolitana de Santiago” and had a 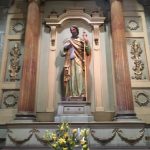 good look around the main body of the cathedral, we couldn’t visit the side chapel as there was a service going on. Building started on this Cathedral in 1748 but it wasn’t completed until 1800, with further alterations at the end of the 19th century giving it its present day appearance. We now decided to return “Donde Augusto” 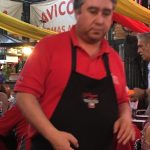 the restaurant in the Fish Market and give them a second chance, we couldn’t believe this very busy, and well patronised restaurant, was really that bad.   The first thing we did was to avoid the waiter we had on the previous occasion, as we didn’t think he brought anything to the party, he was grumpy. Today we had “Pedro”, an affable chap 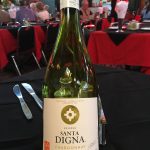 who wasn’t pushy and gave us lots of time to study the menu etc. Fortunately we knew which wine we wanted as I had taken a picture of the bottle, so we could enjoy this whilst we chose.

The only thing that we really enjoyed last time was one of our starters; a shredded king crab, with cream, breadcrumbs and cheese dish and it was delicious, so we ordered two, as these were to be our meal. We thoroughly enjoyed it, but after a 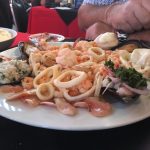 Oh my, my cholesterol will be going through the roof!

little persuasion from Pedro, ordered a mixed shellfish platter to share, oh dear, diet out of the window again. We enjoyed this platter with another bottle of wine, again superb, and we were very glad we had come back for a second time. One of the local dishes here is whole King Crab and we had wondered whether we should indulge, but were not too keen of having to fight the claws etc., we then spotted another table having one delivered and watched as the waiter very professionally extracted all the meat for the diners, who then tucked in; I think we may go back and have 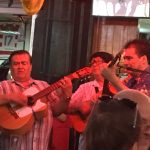 The musicians playing whilst we ate

Eventually we left but today we avoided the street where Christine was robbed, just in case they came back for seconds though there were mounted police around watching over things.

Back into the subway system and with no fuss arrived back at our local station.

One issue we have had whilst staying at this hotel are the electronic keys, we have had to change them several times and we kept telling them the door lock itself was faulty. The receptionist kept blaming us, saying we were keeping the cards near our ‘phones and credit cards, and this was causing the issue. Anyway today we couldn’t get in, and this time managed to get one of the cards stuck in the door lock mechanism. We went down to reception and gave them a few well-chosen “Anglo Saxon” words.   It worked, they sent a man up and guess what, he confirmed it was the door lock was faulty. We not only got an apology but we were moved and upgraded, and to make things even better for Christine, there is a kettle in the room as well; a result.

Again tonight, not only were we tired but extremely full so sat up playing crib ‘till we could go to bed!!!