The weekend starts today, though there doesn’t seem to be much different to a weekday, life continues much the same here; hustle and bustle, noisy excitement from the locals, cruise ships arriving at 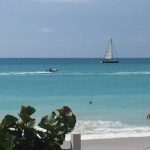 We are quite surprised by the frequency of the tropical showers, our recollection is they weren’t as frequent as they are now, so either we are remembering through rose coloured glasses or it’s global warning; on this occasion I don’t think we can blame Brexit!!!  Anyway we are carrying on regardless and today we’ve selected “Rum Bus Beach”.

After a leisurely breakfast, Jeff and I slipped to the local supermarket to get “stuff” for our picnic lunch before heading off.  Strangely, being Saturday late morning the roads into St Johns were busy and our 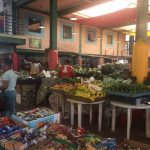 SatNav took us round the side streets to avoid it: very interesting!!!

A visit to the central vegetable market in St Johns along the way was an interesting, though disappointing as it wasn’t the bustling centre of activity we had expected.  There were many stalls outside in the surrounding streets, but inside it was virtually closed down.  We weren’t sure if we were too late or if was the wrong day of the week, still we’ll give it another try, on another day.

En route to this beach, number 5 of 365, we stopped off at Jolly Harbour to book our trip to Montserrat for next Tuesday.  We had been to this tour agent earlier in the week to make the enquires but when we turned up to book, the woman was flabbergasted, she didn’t think we would actually return to book up, she was over the moon!!! 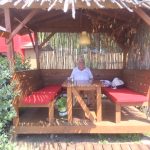 Arriving at Rum Bus Beach we booked straight into the bar/Restaurant “arrangement”  and settled into our own “Cabana” but were told we couldn’t eat our food there.  I suppose they wanted us to eat theirs, selfish or what!   Christine and I went first, we sat in the car eating our lunch and Jeff and Hillary followed us.   At the bar we ordered 3 Caribs (local beer) and made them last all afternoon, well not quite as we brought ours from the car and hid them under the table.  When we had finished one bottle we exchanged it for one of ours.   So every time the waitress came around asking if we wanted another drink we told her we hadn’t finished the ones they gave us; a cunning plan or what!!!    I am sure if they had been reasonable about our picnic, we would have spent a lot more money with them!

Because the weather had been a little inclement, the sea wasn’t its 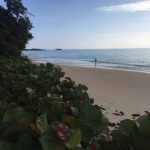 usual calm self and getting over the breakers was hard enough, but getting back out was a major task, nearly as bad as Copacabana beech!!!!!   Still a very pleasant afternoon was had with lots of sunshine.   And upon returning home we enjoyed our first, hopefully of many rum punches.

After a hearty dinner prepared by Jeff and Hillary we sat down to play cribbage.  Jeff had played back in his youth but it was new to Hillary so learning was the order of tonight.  We also received a ‘phone call from the tour agent in Jolly Harbour telling us that the ferry between Antigua and Montserrat would not be running next week so our trip was cancelled and we should call by the office Sunday to collect our refund.   Being Antigua, of course our deposits had been paid in “cash”, no credit cards!!! 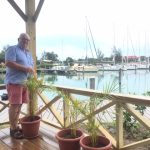 Sunday arrived with very grey clouds and incessant rain showers so we sat on the porch wondering what to do. Still the rain came down so we eventually got into the car and headed off to Jolly Harbour to either collect our deposit or try and re-book for another day.

Though the rain kept coming and all the potholes in the roads were full, the drainage system generally seemed to work, but observing how green everything is, they are obviously used to it and take this “inconvenient” rain in their stride.

Arriving at the door to the booking agent, disappointment set in, they 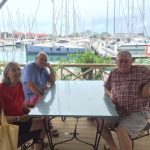 were closed, grrrrrr, why did she tell us to come in today!!!   Oh well it was coffee time so enjoyed one, sitting under a covered gazebo, looking over the marina and being entertained by the comings and goings of the “yachties”.   So it was back home via the Supermarket for a re-think of our plans.

After lunch the rain eventually stopped but the sky was still full of menacing clouds so the decision was taken to cancel the plan to visit Shirley Heights, however to do “nothing” wasn’t an option so Christine, Jeff and I 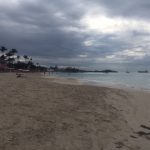 Dark skies, but lovely and warm

headed to Dickinson Bay, beach number 7 of 365 for a swim.   Though we had had much rain the sea was very calm, as it should be, so getting in and out was a doddle. Christine and I enjoyed a long time in the water as the sun slowly started to emerge from the clouds whilst Jeff caught up with some reading.   After a walk along the beach we packed up and returned home.  Of course by now it was a nice evening and with blue sky appearing everywhere, Shirley heights would have been OK but too late now as 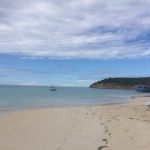 one has to get there at 1600hrs when they open, to have any chance of a good viewing spot.

Tonight the “Creeks” challenged the “Pages” to a game of crib but starting fairly late and taking a bit of time only one game was played and the “Creeks” won, we’ll play again to restore our honour! 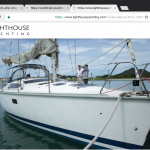 Hunter too light but very cheap

Turners beach, number 7 of 365 was today’s destination though en route we had to collect our money due to the cancellation of our Montserrat trip.   First we had the daily shopping chore before heading off and once completed we were on our way.   Whilst Jeff was collecting our deposit in Jolly Harbour tours office, I popped into the yacht broker to “just” have a look at what’s available.    OK, slight change of plan.    We dropped Jeff and Hillary off at Turners beach and returned to the broker as we had arranged to view 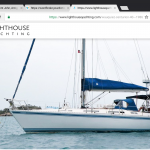 Another of the boats we looked at

2 sail boats!   Both very different but OK though not quite what we would want “should” we buy one: the broker has our e mail address and telephone number!!!

Back to Turners beach where, hot and sticky we headed straight to the sea to cool off, the weather today is as it should be, hot with wall to wall blue sky and a gentle breeze.

Back at the ranch the evening went much the same as the others, dinner, crib and earlyish to bed; all this exercise is wearing us out!!!