Tuesday 3rd we left our mooring on the Severn quite early and headed straight into the first double lock of the Staffordshire and Worcestershire canal; we were through it with no issues and headed straight into the second double lock; here we had a problem. There was a boat waiting to come down and the chap left his boat and came to help Christine by closing down the sluices on the top lock whilst I was waiting patiently in the bottom lock chamber for the middle gates to open. Time marched on and nothing seemed to happening and I noticed Christine and the other guy struggling to move the lock gate. I scrambled up the lock ladder to gave them a hand; nothing. Christine had seen a couple of CRT men earlier and went looking for them to report a problem, in the mean time I asked the other man if he had let both paddles down properly, yes he said emphatically; but looking down into the chamber there seemed to be too much water swirling around so I casually walked over to look; what a plonker, he hadn’t closed them off so we could have been there all day!!!!! Oops and he went and dropped the paddle, now all was well and we were now in the top basin.

Interestingly there was no town or village in this area before the canal was built; Stourport-Upon-Severn was a “New Town” of its day. When the Staffordshire and Worcester Canal was completed in 1768, and joined the River Severn here, the area blossomed around the basin with trade, and once the Birmingham Canal link was complete, prosperity in this area followed.

Whilst in the basin, we made use of the domestic facilities before we were off, heading towards Kidderminster.

We moored right outside the Kidderminster TESCO, very convenient 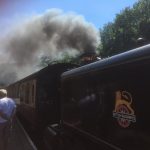 but we didn’t head for TESCO, no we headed for the “Severn Valley Railway” station. Naturally it couldn’t be near the canal; no it was the other side of the town, uphill all the way!!!!! 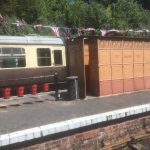 At station with old toilets, milk churns and fire buckets

The Severn Valley Railway is one of those heritage lines that have sprung up after that “Infamous Doctor Beaching” closed down all the un-profitable branch lines, this one closed in 1962.   The Heritage railway society was set up in 1965 and today the railway runs from Kidderminster to Bridgnorth with 4 regular stops and 2 halts (request stop) in between.   We arrived at Kidderminster station with time to get our tickets, board 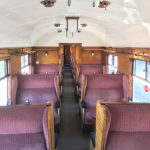 One of the carriages

and source a compartment for ourselves, fortunately for us (but not the train society), we had the pick as the train was very empty.   It was very nostalgic sitting in the old style individual compartments that 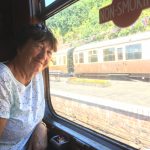 were common back in the day, we even sat in the first class compartment for a short while, but didn’t stop as we only had 2nd class tickets and there was a ticket inspector on board!!!!

We got off at the Hampton Loade stop and 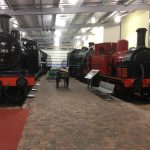 A couple of the many engines on show

visited the “Engine House”. Naturally this only really appealed to me but we were pleasantly surprised. Of course there were Engines of all sorts and sizes to look at but the two interesting displays were the post office carriage and the royal train.   We first visited the post 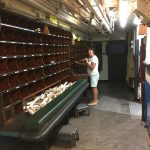 office carriage which is original and set up as it was before postcodes with all the “pigeon holes” for the various cities, towns and villages etc., so that the sorters could deal with all the post as the train thundered through the night.

The next carriage was built for King George 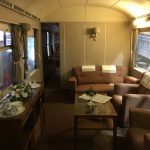 6th at the start of the war. Very interesting, unlike previous royal trains it was very austere, reflecting the issues at the time, but had very modern communication systems as he went around the country boosting morale etc. This carriage was also different to 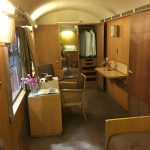 others, being extremely heavy due to the “armour plating” it had an extra set of bogy wheels and springs.   We were guided around this carriage and apart from being “austere” it had everything the King needed. There was also a duplicate carriage made for The Queen, her carriage is now in the York Museum. 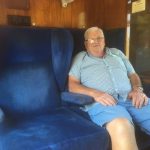 arrived at Bridgnorth. We had spent a few hours in Bridgnorth a few years ago so decided to get the next return back but this allowed us sufficient time to enjoy a drink at the station bar. Everything was very nostalgic except the prices, what a shame!!!!

The return trip was uneventful but enjoyed seeing everything from the opposite direction. We lingered at Kidderminster station and visited another small museum full of assorted railway memorabilia before walking 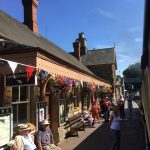 One of the pretty stations

back to the boat, downhill, hooray!!!

England was playing Colombia this evening and we didn’t feel being outside TESCO was a good place to be so headed off towards the Kidderminster lock.   The lock gates were open so in I went, Christine closed the bottom gates behind me and went to open the top ones; I waited patiently but nothing happened, eventually I climbed the lock ladder to see if I could help but we discovered we needed a special key, which we didn’t have so I had to go back down this slippery, algae covered ladder and reverse out. I had to keep going backwards, under the road bridge until we found a straight bit of canal to moor against, nearly back to where we had started.   We didn’t watch the match but heard the screams and cheers from the town’s people of Kidderminster and knew we had won. The rest of the evening was noisy as just behind the brick wall we were by, we had swapped TESCO car park for a outlet centre car park with a couple of fast food places that serve alcohol, still everything seemed good humoured and we slept.

I walked up to the lock early next morning and low and behold there was a boat just pulling up and he kindly let us in the lock first. The chap also explained what key we needed; it was called a “Conservation Key” and it is used in town Centre’s where there has been vandalism. Now we had a challenge to get one!!!!

We came across a CRT workshop at Stewponey Wharf, hoping to get a key but there was no one at home. We were just about to set off again when the CRT workboat turned up so we asked if they could tell us where to get a key, they did better than that, one of the kind gentlemen gave us one. 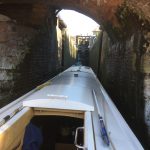 One of the three locks

We then came to the “Bratch Locks”, a 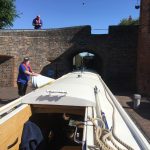 flight of 3 interconnected locks raising the canal over 30ft. To operate these locks requires special skills so the CRT people man them with their volunteers. They control access and send boats through in batches of three to preserve water but more importantly to avoid a boat going up at the same time as a boat coming down and trying the impossible, to meet in the middle.

Through the lock and we continued up the Staffs and Worcester, a very pretty canal passing through gentle countryside and many period 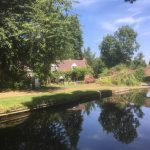 One of the many lovely properties on the canal

cottages, most no doubt originally associated with the working canal. We passed the Stourton junction where the Stourbridge canal branches off towards Birmingham and after one more night we passed Aldersley Junction where there is another link into Birmingham. The Staffs and Worcester canal is 46-miles long with 43 locks though we only did 25-miles and went through 33 locks.   When we arrived at Autherley Junction, we headed up the Shropshire Canal. 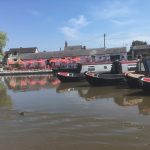 The first lock at the start of the Shropshire is only about 6-inches but this was a method, when built, to keep their own water in their own canal, strange or what.

We had a gentle, lock free run up to Brewood arriving early afternoon. Tonight we had booked a table at the “Shropshire Grill” as it has fond memories for us and it serves excellent food.