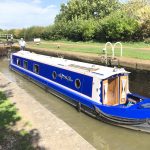 Meg A Star in last lock 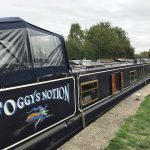 As there are around 2,000-miles of navigable network, me thinks we’ve not done too badly in the time we’ve had, certainly scratched the itch I’ve had for many years.

It took us all Thursday to sort everything out and going to bed for our last night was interesting, picking our way through everything piled on the floor.

Friday morning, whilst I collected the hire car Christine scrubbed the boat from the bow to the stern, she looked so good that for a moment we wondered if we should keep her!!!!  I started to pack and just managed to squeeze everything in except, to Christine’s consternation, we had to leave her ironing board???.   I signed all the necessary paperwork and handed the keys to James Hillsop (Rugby Boats) for him to do the business.  It seemed a fitting place, it’s where we bought her from, so she’s going home.

P.S.   Less than 24 hours after we left her, we had an offer, and within an hour, we had completed negotiations and Meg A Star is officially sold. 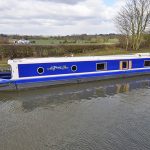 For the record, the routes and associated locks we travelled are detailed below.