Stone to Stoke on Trent

Sunday morning we dropped Pat off at Stone railway station and headed back to the boat through the high street, again another town centre packed with charity shops. Apart from venturing out to Morrison’s, we stayed in and around the boat as the weather was indecisive, couldn’t decide whether to rain continually or not. 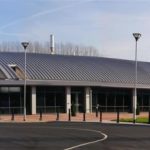 north to the Wedgwood Factory. Neither of us had been to the visitor centre or the Museum before so were looking forward to it, though Christine was far keener than I was to visit.

After mooring at Bridge 104, we followed the signs to the factory but they weren’t very accurate and we did an un-planned 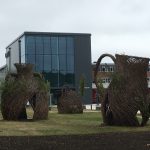 Pots made from wicker at entrance

detour to get there. Along the way we did contemplate not bothering as seeing the factory through the trees frustrated us as we struggled to find the way there, but hey ho, we persevered and duly arrived. 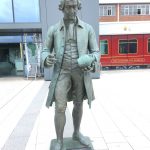 Potteries region, but because of major subsidence due to coal mining in the area over the years, by the first half of the 20th century manufacturing the factory was sinking and was forced to move. The 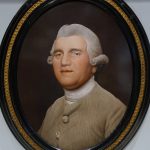 present site in Barlaston, a few miles from Etruria was selected; they even built their own railway station called “Wedgwood” just outside the factory. 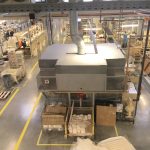 1759. The collection is so vast that it would take several weeks to look at everything, but in the short time we were there we got 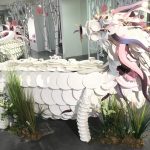 Dragon made out of china

a good flavour of what the company has made over the years. It is also very evident why Wedgwood was so popular in the 18th and 19th century judging by the various European royal houses that patronised their products. Next we went round the 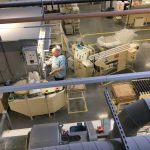 factory and this was quite amazing, we were quite amazed how labour intensive the operation is. Though there are modern ovens and mechanical handling equipment, scores of people are employed to carry out the decorations on all the various products. There are rows ladies and some men sitting at workstations delicately applying decorations to cups, plates and teapots etc. We were mesmerised and stood watching 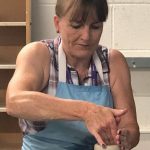 Marian went on a previous day

in awe at their skills, steady hands, professionalism and the pride they took on their work.   We spoke to a few and were surprised how long they had worked there. In the “blurb” they talk about how the various skills have been handed down from generation to 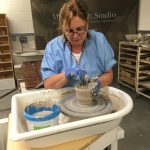 Showing us how to do it!

generation and it was evident to us this actually does go on, even in todays world. Of course today Wedgwood is not a family run business, it is part of the “Fiskars” Group who own 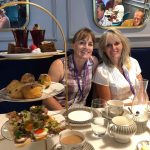 amongst many others “Royal Copenhagen”; “Waterford”; “Gerber”; “Royal Albert”, and “Royal Doulton”.

Halfway during our tour we visited 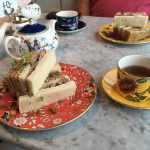 We had finger sandwiches and tea.

their “Tea Emporium” and we each enjoyed a rather expensive pot of tea in an ornate Wedgwood teapot and fine bone china cups accompanied by finger sandwiches. 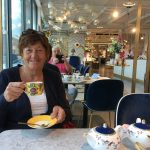 anything suitable for the boat!!!!! 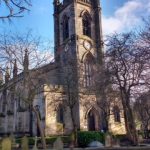 We now headed onto Stoke proper, stopping for a night along the way. Christine is still experiencing a small issue with her house; no water, no electricity; nothing major but it is holding up proceedings and she has received the forms electronically but needs to print them off, sign and scan before returning them, so we found a PC World, bought a printer and did the business; hopefully her building works will continue now.

We decided to spend the day in Stoke on Trent, so walked into the town centre but what a disappointment; it is thoroughly rundown boarded up shops, numerous charity shops, discount stores and a poor excuse for a market; I must say Campo Verde’s Sunday market is bigger, and that’s saying a something!!!!! Even getting a mid morning cup of coffee was difficult, we had to resort to a pub! Not everything was disappointing; by the time we had returned to the boat we had 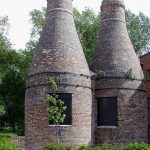 Two of the restored kilns 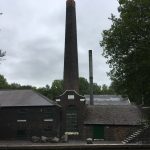 lo and behold it was closed and upon better inspection noted it only opened when there was something special happening; what’s the point of advertising a museum, encouraging folk to visit and then not open it, perhaps this is indicative of a run down town.

The afternoon was taken up with chores ready for Russell arriving for a night’s stay tomorrow when we will attack the Caldon canal.