Thursday and would you believe it, it’s Lee and Sarah’s last day but yesterday, out of the blue Sarah asked if there was time to do “Stingray City”, and after a ‘phone call we were booked in but  had to be on the other side of the Island for 0830hrs. So much for relaxing; we set the alarms for 0630hrs as we had no idea what the early morning traffic would be.  What a good job we did, according to SatNav it takes 29-minutes, but the journey would take longer due to pot holes, unusually 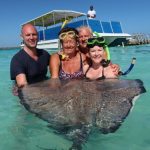 heavy traffic, road works, an un-made road and traffic lights that flash red “every-which-way” causing a mad scramble to get across, not that I had trouble with that, I just went!!!!   We finally got away at 0730hrs and eventually arrived about 0820hrs, made our way to the office to pay etc., only to find out we didn’t  actually need to be there until 0855hrs, we could have had another 30-minutes in bed!!!!

There were about thirty of us in the boat as we headed on the 10-minute journey to the reef where all the Stingrays congregate; a large sandbar about 3-ft deep with a floating dock secured to the sea floor.  As soon as we entered the sea we were surrounded by Stingrays, 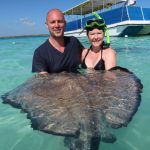 amazing creatures, so friendly and used to humans. One of the rangers told us he had one female stingray he called by name, we immediately checked to see if it was 1st April but no, he then proceeded to demonstrate it, and she went to him!   We were Snorkelling, filming, and even feeding them with baby squid though this did cause poor Christine a small problem.   We were shown how to hold the squid in our hand, how close to put it to their mouth, and then let the stingray suck it out.  If we were too close we would get bitten, too far away and it would just drop to the sea floor.   Christine dropped hers, oops and said that was it;  however Lee thought differently, and got her another squid and wouldn’t take no for an answer; I am pleased to say she succeeded.

There are about 220 stingray species in our oceans, mostly in sub and 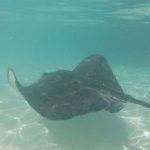 tropical waters, they are also related to the shark family. Around Antigua there are eight species including Eagle Rays, Whiptail stingrays, and Butterfly stingrays but the rays located here in Stingray City, are “Southern Stingrays”.   The reason they congregate on this particular sandbar is all down to being fed by the rangers and visitors, even during the “closed” season, the rangers still come at 0900hrs, 1100hrs and 1300hrs to feed them, this way the stingrays know through habit when food is always available and just 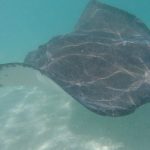 After about an hour watching, handling and talking about them we headed back to the Island for a  complementary “rum punch” and to view the “professional” photos taken whilst out in the water.

OK, the morning was still relatively young so headed to “longbay beach” for a swim and also booked into “Mama Pasta”, an Italian restaurant on the beach for an early lunch, but unfortunately though the setting was great, the food wasn’t quite as expected, never mind it was an interesting place to be for lunch!!! 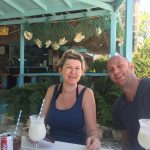 The drive back was more sedentary and Lee and Sarah had oodles of time to prepare for the journey back to UK.

We left the house in plenty of time to get to the airport but Antigua, well the roads in particular hadn’t quite finished with us.  “Friars Hill Road” the main road we have to use has had major roadworks, apparently for the best part of two years, though I have to say since we’ve been here we have seen quite a bit of progress.  Anyway today there was major “indigestion”, total confusion in the one way system, probably not helped due, as usual to some drivers totally ignoring the red lights and meeting oncoming traffic; normal practice here but please, not today as we have two people trying to catch a flight.  Out of desperation Lee got onto his SatNav and low and behold found there was a “sort” of track we could use to by-pass these roadworks.  The track forked and we went one way only to find a darn great pool of muddy water blocking our way, oh for the off-roading buggies we had on Wednesday!!!  A quick 3 point turn and we came back to the junction and went the other way.  This was certainly the “dry” way but bumps and holes needed to be circumnavigated and well done “Pepe 2” for taking them all in her stride!!!!  Back on route we watched their Virgin flight arrive but we did make the airport with time to spare, phew!!!!! 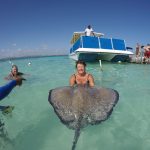 Not sure I enjoyed this

sailing, both activities started at reasonable times and apart from those two activities they wanted a few relaxing days on a beach, a little snorkelling and generally unwind. From the first night, they arrived on Saturday to the time we took them back to the airport today, Thursday, there has been precious little chance of relaxing; yes they fitted in 6-beaches and snorkelling off the boat, but they added in other unplanned activities that most nights we were all knackered.  Still 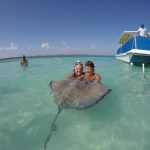 what a fantastic few days we all had; thoroughly enjoyable, so we must do it again somewhere, sometime.