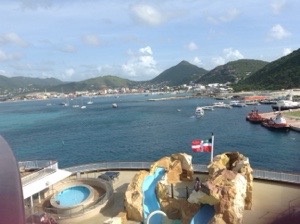 well we have spent many good times here, so we decided to go back to Simpson Bay, where we used to moor up.

We left the ship, walked to Philipsburg, then caught a bus, well actually it was more a beaten up van, but the guy was very friendly, and took us to where we wanted to go, 2$ each, far better than a ships trip, as we have been round the island with Andrew many times, and enjoyed many of the bay’s etc., 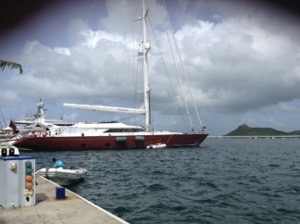 . some big boats have arrived, but most are still making their way across for the winter season, so it’s very quiet here.

We had a coffee caught up with the Internet, and then walked to the beach, we moored here, and in those,days, I could swim to the boat , we looked how far it was and decided against it, must have
been fitter. I remember doing it with Andrew, and he was encouraging me all the way. 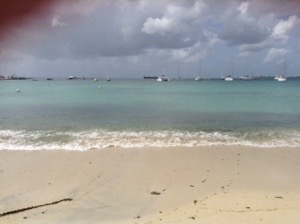 Next stop lunch, where we had rum punches again, they were lovely. 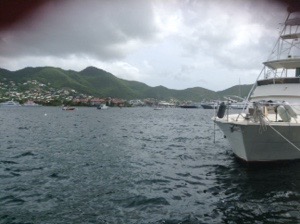 . We also ordered spicy chicken wings, mozzarella sticks, and jalapeño’s, well the chicken was so spicy, we nearly exploded, they were hot hot hot! We had to drink another rum punch to cool ourselves down. 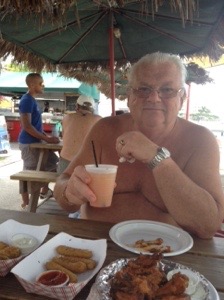 We caught the bus back to town, and wondered through the market, I found a fridge magnet, and a pool dress, so can’t be bad.
We decided to catch the water taxi back to ship, to avoid the 20 minute walk, it’s very warm and sticky now, so just as well. 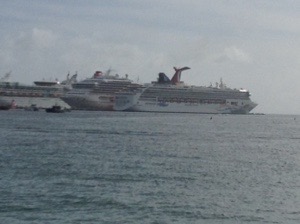 There are four ships in now, two very big Royal Caribbean, Queen Mary 2 and we are the poor relation.
We had dinner, and went to show, another nap was taken whilst he was on, an American Comedian. We just didn’t get the humour.