Woke up today approaching St.Kitts, we went down for breakfast, then headed off the ship to the harbour entrance. 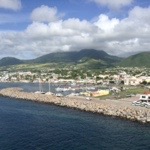 We waited for the coaches to collect us, and then headed off for the train, what a lovely trip we had, the lady gave us so much information on the Island, on our travels previously we have never been here, so it was different. Apparently the is,and is over run with green monkeys, the driver suggested we took one home with us! 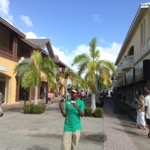 . We arrived at the train station, in the middle of nowhere, and we boarded, to be told drinks were complimentary, oh dear! 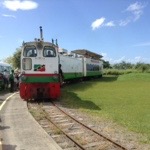 what a fantastic trip we had, lots of fantastic scenery, with lots of rum punches, and friendly chatter.

the trip took about three hours, through lots of fantastic areas, some very poor, some for the tourists. We passed the schools, and the children ran out to wave, it was a lovely sight. 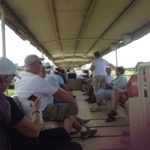 . We eventually returned to the coach, six rum punches later (in Geoff’s case) after a lovely trip.
The town where we are moored, is geared for the tourists, very pretty, but very expensive, we have stopped for wifi and lunch, but most have gone back on the ship to eat. We meandered around the town then headed back.
Having got on board about 4, instead of staying in the cabin, we went for a lovely swim and jacuzzi, it was great, we had the pool to ourselves, we did the daily sudoku, then went down to change for dinner.
After dinner we went to the theatre, they had acrobats on, Jan, Mike and I all fell asleep, that’s how good it was! We walked around the deck, then bed. Goodnight