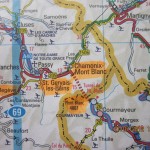 Having had the day yesterday, not doing much, we loaded the  bikes again, after we had been shopping in Aix Le Bains, we left this morning about 8am, we had to be out of campsite by 9am, to avoid paying for another day.

We have headed north again, and are going exploring around Mont Blanc tomorrow, we 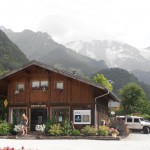 hope to catch a little train, and go up as high as we can, so we have to find some warmer clothes, and walking boots, the temperature has certainly dropped now, we are about 25 degrees today, they are even threatening rain! 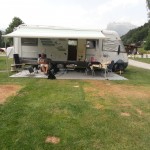 Our journey has taken us nearly two hours, and we have twisted our way up this mountain, with hairpin bends, and drops that I did not like, I hate these sorts of roads, eventually we found the campsite, having had to phone the owners first, we had not gone far enough, just keep coming up the mountain he said.  It is a lovely site with lovely big pitches, when we found ours, we thought it was atleast two, so we have spread ourselves around, as we will be here for a few days.  The dogs are happy as they are on grass again, and it is definitely cooler here.

In the afternoon, we took the bikes for a ride into town, we had a wander around, but not 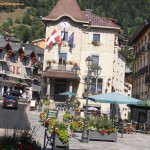 much to see, we stopped for a drink, 9 Euros for a small beer, and an orangina, we are definately in tourist land now.

We then went on to a little place called Megéve, again, we had to do the twisty roads, on the map it looked straight, which is why I suggested it,  10km of twists and turns, with cars  trying to overtake us, bit scary, but we did it.  There 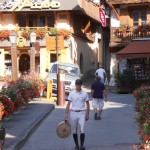 was an international horse jumping show going on, not quite what we were expecting, we wondered around there, then got on the bikes, and found the village.  It was very tiny, very pretty, looked very expensive, in fact someone described it as the Monaco of Mont Blanc, they had several horse drawn carts going around, as no vehicles were allowed, but we managed to go further than most, only because we were on the bikes, it was certainly worth the effort.

Back at the site, we walked the dogs, and then had a lazy evening.