The winter cold was getting through to our bones and the prospect of several more weeks of it was too much to bear, so at the last minute booked ourselves a 14 day package holiday to Sharm El Sheikh, that “winter warmer” at the southern end of the Sinai Peninsula, on the Red Sea.
After an interesting flight (crammed in like sardines) on a Thompson ‘plane and a short transfer we arrived at our hotel, but with a two hour time difference it was dark upon arrival. Having left at 0515hrs to ensure we had extra time to get to Gatwick, (it had snowed on the Saturday night) we were very tired, but having booked a “Fully Inclusive” holiday, we felt obliged to have an evening meal!! When we hit the sack we didn’t need any rocking to sleep. 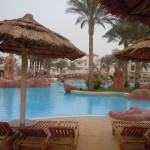 Tuesday there was a meeting with the Thompson Rep at the un-godly hour of 1000hrs, so any lie in had to be on another day. After a hearty breakfast we met with the rep and booked a number of excursions including that “hot spot” Cairo; more on that later.
The early part of the week was taken up by finding our way around this hotel complex, keeping warm, yes believe it or not there is a lot of cloud and a cold wind around, we were also getting Christine better, yes she had “it”, top and bottom but fortunately there was a Doctor on site so he came to our room, put her on a drip and through it administered a concoction of anti biotic’s etc., that did the trick!!! We had to change one of our excursions to accommodate Christine but hey, never mind. I soon followed but contained “it” to bottom only and following a trip to the Chemist all was fine.

The days we were not on trips we leisurely spent catching up with e mails etc. and by the pool, we played crib in the afternoon, sitting by the pool, with a waiter keeping us in drinks, very civilised.

Gloom and despondency on the Monday morning, we had to pack and be out of our rooms by noon, still we were able to indulge in another “gourmet”, well big lunch before the coach arrived around 1500hrs.

I think I should mention “Samir Hassan” our Thompson Rep. He was very courteous, helpful, and always cheerful, sometimes under very difficult conditions. We had quite a few chats to him about the Egyptian political scene, and of course some of his “visitors from Hell”!! Anyway, thanks again Samir.
A short and quick trip to Sharm El Sheik International Airport we joined the organised chaos and several hundred other passengers trying to check in. There were flights returning to every airport in the British Isles that evening and we naturally chose the wrong lane! However we were fortunate to note the “Bristol” queue had ended and we were invited to go to that desk, well we were out of our blocks like hundred meter sprinters and got to the desk first. We asked if there were any “extra leg room seats” available, there were and we booked two of them but at a cost of £20 each. We were annoyed as we had tried to book them with the Thompson rep who told us there were none available but ask on the day in case there could be some “no shows” When we checked in and bought these seats there were still many more people to check in and Thompsons would not have known at that time if there were in fact going to be “no shows” Had we booked with the rep it would have cost £6 each so we think there was a scam going on!! Anyway an uneventful and comfortable flight back, our bags arrived on the conveyor fairly quickly, bus to the car park and away: Arrived back in Waterlooville, drink and in bed by 0030hrs, knackered!!!!! Our mistake was traveling back after half term week, never again.