Sea-Day and Crossing the Equator

Today we headed down to the mouth of the mighty Amazon. Interestingly this is not a Delta; it is the mouth of the Amazon. The reason and difference is due to the fact that so much water is flowing out of this river, taking many tons of sediment, nutrients, Gold and many other things. The volume and strength of this flow keeps going out well into the Atlantic. The water coming out of the Amazon is “Café-au-lait” colour, and this brown stain stretches out nearly 150 miles into the Atlantic. The currents then take it northwards and we were sailing through this murky water for several hours before we actually turned into the Amazon. At the entrance, depending on the height of the river, the distance from bank to bank is about 35 miles, much further than the Straits of Dover in the English Channel. 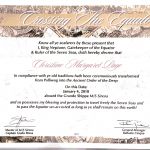 Certificate to prove it 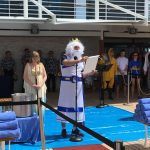 Neptune calling for everyone to attend. Think the beard was used for Father Xmas as well!

Naturally being on a ship and crossing the Equator; for the first timer’s King Neptune has to come aboard to initiate them into the Ancient Order of the Deep. Now fortunately I was “done” on my first sea crossing in 1949, I still have the certificate to prove it! But Christine, oh no, she has to go through it along 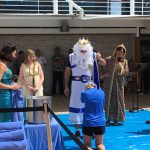 Crew suffered more than we did

with nearly have the guests.

Unfortunately things have changed over the years, Health and Safety has got in the way and later hygiene. When I went through it, and bear in mind I was only 5 years old, each person going through the ceremony had to sit in a seat with your back to the pool. King Neptune said a few words, covered you all over with shaving soap or something and then tip you backwards into the swimming pool. That’s the proper way but 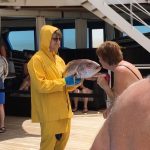 Kissing the fish, not pleasant. Hope we don’t get fish tonight on menu!

today they queued up, first to kiss a fish then they 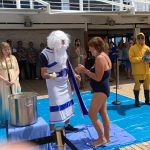 Porridge in my hair arms and neck, great!

were dabbed with Porridge, after which they are told to use the shower; how weak is that!!!!! Anyway Christine, after being 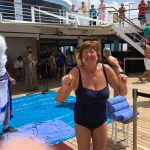 Well at least we will have safe travels now 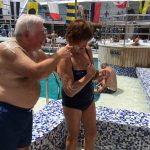 Porridge does not come off very easily! Still I enjoyed sharing a shower! 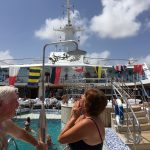 We had our second Amazon Lecture this morning and again it was fascinating. We went through the Pre-historic History and the evolution of local tribes, how the Spanish and Portuguese carved up the continent and how mankind today is decimating the Rainforest for financial gain. About 20% of the Amazon Rainforest has ben removed and many of those places are now just desert. The Atlantic Rainforest, South of Rio de Janeiro is only about 15% to 20% of its former self. Now I’m not a “green” person by any stretch of the imagination but I do understand the significance of the looking after our Rainforests; maybe sense will prevail. There is so much about the Amazon and De-forestation, if anybody is interested here are useful two links to get you going!!

Most of the day was taken up playing cards with a couple we have met from Canada, lovely, down to earth couple and on our wavelengths, that takes a bit of doing!!!!!

Dinner tonight in the Buffet sitting out under the stares whilst the ship is at anchor in the middle of the Amazon, again Lobster but this time with giant Prawns. Why are we anchored in the middle of the Amazon I hear you ask; well, we have to take on immigration officials who go through every passport, and enjoy a good mea before leaving!!!!. We also have to take on 2 pilots; they work a 5-hour shift each and will be with us all the way to Manaus, 900 miles inland from the Atlantic; a fair way you could say!

Tonight’s “Showtime” was called “Five O’clock somewhere” and they were a brilliant young married Irish couple; singers and multi instrumentalists who were funny as well and at the end had most people on their feet. We look forward to watching them again in a few nights time.

We left the Sirena lounge after the show and strolled along both the port and starboard decks, I’d like to say in the moonlight but can’t, though there was a nice bright moon, there were also floodlights along the deck. We appeared to be about 1 to 2 miles from one side of the river and couldn’t see anything of the other; the opposite bank must have been over the horizon.

Tomorrow we arrive at Santarem around midday.

This entry was posted in At Sea. Bookmark the permalink.