We left Charleston ok, but when we hit open sea we were in for a bit of a shock as the weather had “turned”, and not for the better, oh no. It was raining, windy and the sea state according to our new Captain was rough. To make things worse, he advised us that this would most probably continue ‘till we reach Bermuda, this was not in the plan; still life on board continues though our arrangements to play Shuttle board were scuppered. Instead we introduced Dave and Elaine to Rummy cup as this was a game they hadn’t played before. It was quite a social affair; we sat in the Golden lion pub and enjoyed a few beers and another pub lunch.

At 1400hrs we had another lecture by our retired Customs officer, again interesting, but not so funny, probably as his talk cantered around 3-real case studies.

Tonight is again formal, but first we had another invitation to the Captain’s cocktail party so had to be ready an hour earlier. This was our first chance to see the new “boss” and he certainly has a better sense of humour than the commodore who has just left, and we think we have seen the new captain more over the last couple of days than the Commodore during the previous 17 days. Christine says he is very good looking and “scrummy” and too young to drive such a big ship.   During the course of his speech he did comment on the state of the sea but assured us the stabilisers were out; I would not have liked to be here had there not been any.

Dinner was normal though the waiters did have to walk at a funny angle at times. Our American fellow diners didn’t show, we think they were suffering and had taken to their beds.

Tonight’s show was due to be a “spectacular” with the Royal Court Singers and Dancers, but with the ship rocking ‘n rolling, it was unsafe. Fortunately we had another performer arrive on board in Charleston so he stepped into the breach. He was part of the West End show, “The Rat Pack”, he sang many Frank Sinatra, Tony Bennett and Matt Monroe songs, to name but a few.   He was good and did well as of course he had minimal opportunity to rehearse with the band. 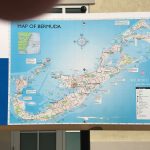 Map of the Island of Bermuda 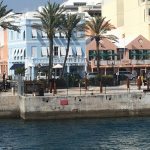 rocks and coral that surround Bermuda. The Channel, though well marked with buoys, is still very tricky and it took a good hour to just get into the port area, then we had to turn and dock, still it all went well.

The cruise terminal is in the Old British Naval Dockyard. The

Part of the old Dockyard

dockyard was started in 1811, but all naval activities ceased in 1995, and it has now been re-generated into a cruise ship port with tourist attractions utilising the old naval dockyard buildings; I have to say they have made a good job of it.

We left the ship soon after docking around 10.30, bought ourselves a day bus-and-ferry pass and headed off to the “ferry” terminal, the first leg of our journey to “Town St. George”, the original capital of Bermuda.

Bermuda is a small jewel in the British Territorial Crown in the Atlantic; it consists of around 138 small Islands, many linked by bridges, in a fishhook shape and about 22 miles long and 1-mile wide. Bermuda is about 600-miles east of the southern USA.

Part of the old Dockyard

across the very blue lagoon to Hamilton. Hamilton is in the centre of the Islands and was established in 1793; named after the Governor of Bermuda, “Henry Hamilton” and it has been the capital since 1815 as it is in the perfect place.

Upon arrival we headed straight for the bus terminal as we were going to visit St Georges, the original Capital, founded in 1612 and today a world UNESCO heritage site. The trip took around 40-minutes but we got to see most of the Island, the very blue waters, sandy beaches and lush vegetation as well as the international airport, built across the island.

The bus dropped us off and we walked down a quaint street, lined with old terraced buildings dating back to the 17th 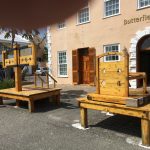 The stocks in the square

– 19th century and into King’s Square. Here we popped into the White horse for a coffee and a drink, this was a place we spent quiet a bit of time in when we sailed here back in 2010 and 2012. The square is the centre of this small, but pretty place, with the White 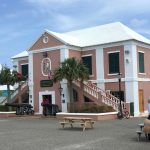 horse and gift shop on one side and the old state house, built in 1620, and other buildings on the opposite side with the pier, customs house and waterfront on the third side. The town was built on St Georges harbour, a large lagoon with a narrow, but deep entrance. There are also replica 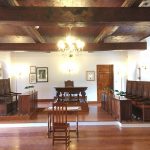 Inside the state house

stocks, and a ducking stool where a few local volunteers 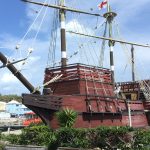 demonstrate their use. Here there is also a replica of the ship “Deliverance”. In 1609, Admiral, “Sir George Somers” was heading for Jamestown in his ship “Sea Venture” when a storm sent him onto the rocks here. All the 150 colonists and crew survived, and under the Admiral’s guidance set about building a replacement ship. This new ship, “The Deliverance”’ sailed for Jamestown 10-months later. Apparently this story inspired William Shakespeare to write “The Tempest”, which was published a few years later.

Having had a good walk around, we caught the bus back to Hamilton where we thought we would have a bite to eat, which we did; we found a “KFC”!!!!! 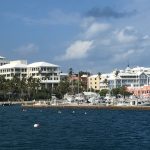 Views from the ferry

We caught the ferry back to the Dockyard, had a good look around then boarded the ship just before the gangway was hauled aboard.

As a final comment, I was surprised just how much history such a small island has; first seen and named by a Spanish Captain 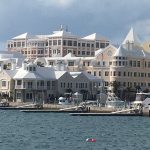 “Juan de Bermudez” in 1503 but not claimed by Spain. There was the Admiral Somers incident in 1609/10.   Settlers arrived and established the capital in 1612; this was followed several years later when slaves were brought to the island, and it wasn’t ‘till 1684 that the Brits administered the Colony. Bermuda also played a part in the English Civil war: The American war of independence: The American Civil war: The Boer war, and not forgetting WWII, when the US set up a 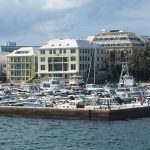 Another view of waterfront

Dinner as usual was followed by the show; a British comic, Jeff Stevenson, who tried to encompass jokes that all nationalities could understand, but though he was funny in places he certainly wasn’t the best comic we have seen, lets say we wouldn’t go out of our way to see him again.

We now have several sea days before we arrive In “Prai da Vitoria” in the Azores.

This entry was posted in Bermuda. Bookmark the permalink.