No rush this morning, we weren’t due to dock ‘till around 0900hrs and as we had holidayed on the island in the past, we only thought of going to Fort King George, not having been there before. We ordered Room service again and wow, firstly they answered the ‘phone and secondly, they brought exactly what we asked for. Perhaps they heard I wasn’t happy and was going to mention it in dispatches: whatever it was, they were back to firing on all cylinders, I hope it continues!!!!!

Because Christine is still coughing a lot we went to the buffet where we can sit in a corner, outside on deck. After a few housekeeping tasks we went for our morning coffee/tea and snifter before leaving the ship. We had an interesting chat with Aldo, the Barista as he wasn’t busy he was happy to chat about his contract and working conditions etc. They may not be paid in the upper echelon of earners but as he pointed out, he lives for nothing, pays no tax and can save all his earnings. If he fancies a beer in the “Crew bar” it only costs him $1, we pay $9, now folks you can understand why people buy full booze packages and naturally try and get their money’s worth.

I digress. We left the ship and as we got to the end of the gangplank, the heavens opened so back on board and got the umbrella etc., and ventured out again. Naturally by now the downpour had ceased and the sun had dried the ground; oh well that’s the nature of things around here. As we walked into the customs hall we asked the tourist information lady how far away is Fort King George, to which she replied ½ an hour walking, up hill all the way so get a taxi and walk down. Ha, that’s for wimps we decided and set off on foot following Google Maps on our ‘phone.   Sometimes, don’t you just wonder why you make silly decisions! The lady in the Tourist office was most probably right; a taxi may have been the best option but the decision was made so off we climbed up a 1.7 Km un-ending hill in the midday sun, still with a number of rests we arrived and felt good; well knackered actually, soaked to the skin, no, not by rain but by sweeting out last nights booze. Still we were there ¾ of an hour after we started and guess what, it was all 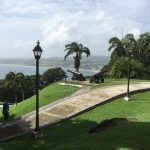 closed. We were obviously annoyed, as when we were heading up the hill, we met a couple heading down; they incidentally took the sensible option, Taxi up, walk down: they told us the Museum was open. We eventually realised that the museum was only open for the organised tours from the ship and this couple happened to be there at the right time. New Years Day is a Holiday here as well, how un-reasonable is that?

The views from up here were stunning; there is no doubt why 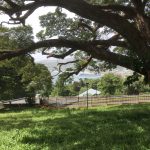 Fabulous old trees, and if you look carefully you can see the ship

this site was chosen and why the British wanted it, with its commanding panoramic views it was the perfect location to spot any advancing ships, and protect Scarborough.

The history of this site is interesting: In October 1777, Lord George Macartney, British Governor General of Grenada and 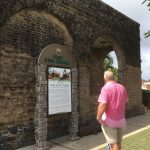 Outside the museum. Geoff’s shirt is a little damp

Tobago, authorized the erection on “Scarborough Hill” of two barracks and double kitchen to house two companies of soldiers, together with capping the hill for a parade ground. By 1779 work was near completion.

In June 1781, Tobago fell to the French. By 1784 the French, under General Blanchelande, began construction of a fort on the hill. Work was halted in 1785 and resumed in 1786 under the administration of Count Dillon. The fort was named “Fort Castries”, named after the French Minister of war.   In 1789 it was renamed “Fort Republique” and “Fort Liberte” in 1790 when the garrison revolted. The British under a Major General Cornelius Cuyler, recaptured the fort in 1793. 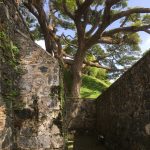 The walls everywhere were solid, built to last

Tobago was returned to France in 1801 but by 1803 was again a British Colony. The fort was then referred to as “Fort King George” after King George III, in 1804. On the 11th October 1847 a hurricane damaged and destroyed most of the buildings. A garrison was maintained until 1854 when they withdrew to Barbados. 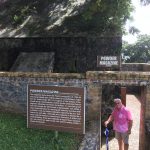 Powder room, the walls were at least 2ft deep 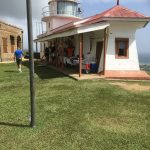 The lighthouse doubled as a gift shop as well

So now to plod back down again, easier down than up Christine said but I disagree, my knees suffer more going down than they do going up but hey, as there are no Taxis’ we had no choice. We were about ½ way down the hill, sitting on a wall, when a lady stopped her car, wound down the window and asked which way we were going, up or down. Down we said, well jump in she said, I’m going down to the Harbour. We were a little hesitant at first, but she said she was part of the tourist information bureau; I’m not sure why we believed her but did as she said; now that was a very good decision; we were dropped off by the harbour gates a few minutes later.

Back on board we stripped off our wet clothes, had showers and up for a snack lunch, this afternoon we are going to take it easy, after all we had done about 9,000 steps by 1300hrs!!!

Tonight we had re-booked the Red Ginger, the specialty restaurant offering Asian dishes. So, after our lazy afternoon we readied ourselves, headed to Horizon’s for an aperitif before heading to dinner. It was as magnificent as before though I was very conservative and chose the same dishes as last time; it was soooooo nice!!!!!!!!!!! Christine followed my lead and had the same.

The floor show this evening were just two resident singers, they were very good, we stayed ‘till the end!!!! We had planned to return to Horizon’s but after the show we wilted and headed back to the cabin and bed.

Tomorrow a day at sea: washing, the odd lecture and hopefully sunning ourselves before our next stopping place, Devils Island.

This entry was posted in Tobago. Bookmark the permalink.