A normal morning, tea in bed followed by breakfast, then over the tannoy: —— oh dear were going to be late arriving at Santarem due to a stronger than expected current. I think this ship need’s to up-rate its engines; it needs extra power to deal with all the currents!!!!!! By the way we are now 400 miles in-land from the Atlantic and the Amazon is still very, very, very wide. 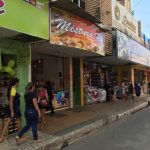 A beautiful day, sunny and very hot as we boarded the complimentary shuttle to town; by the way, I have to say I use the term “town” in the loosest term. The coach bumped along the road, no rear suspension, no air-conditioning (not that we expected this) hard and narrow plastic seats and that’s before we talk about the roads. Potholes, manhole covers missing, traffic going where they want, no rules me thinks, and a lot of noise, horns etc.

There is not too much to say about the “town”, whatever shop you went into the stuff for sale was much the 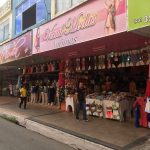 same; washing machines, fridge’s, mobile ‘phone covers etc., etc., and clothes: blimey, there were so many clothes retailers I don’t know how they all survived. 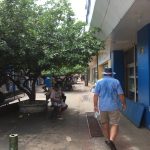 We walked up one street, strolled down another, meandered along another and eventually arrived at the Cathedral. From the outside it looked promising, but on the 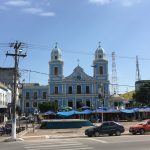 inside, it looked rather austere; not what a RC church normally looks like. 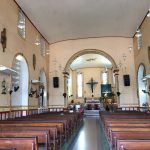 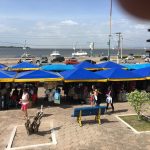 Local market stalls, not a magnet in sight!

We then walked through the market and back to the Promenade. There were all these Amazon boats with their bows resting on the “beach”. We think they were “types” of overnight ferries as they had hammocks; two or three decks and 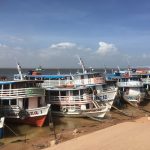 they were loading sacks of rice; fodder for the “guests” we presume.

Not withstanding our short and limited stay here, Santarem does have some history but more importantly it is a junction where two major rivers meet; the Tapajos River flows into the Amazon but the amazing thing here is; the Tapajos River is crystal clear but the amazon is “Café-au-Lait, and both run alongside for several kilometers, before converging. This phenomenon is called, “The meeting of the waters by locals”, no surprise there!!!!! However saying that, the 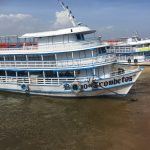 One of the many boats tied up on the waterfront

view is quite amazing. When you look over to the Amazon you think you are looking onto a very long sandy beech; wrong, it is the Amazon Water.

Now for the little history for those who may be interested, oh well here goes!!!

The first reference to this place was in 1542 by a Spaniard who wrote about the local Tapajos Indians. 10 years later a Portuguese explorer along with a “Father Cristoovao” and a few hangers on set out to explore the upper reaches of the Amazon. They came upon this area where the two rivers meet and set up a port.

The actual town of Santarem was founded by Father Joao Filipe Bettendorff in 1661, where he built the “Chapel of our Lady of Conception”, The town was named after the city in Portugal, and apart from that, there is not a lot to say. But today this port, apart from being a cruise stop, is a very busy terminal for the loading of Soy Beans. Cargill Inc., has a 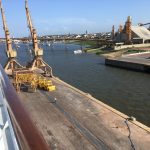 major facility here. They have a number of very large storage silos and a conveyor system to load bulk carriers when they arrive. You may wonder why I mention them, well, there is a lot of controversy in these parts about the way they are decimating the rain forest to grow soya beans. They must feel guilty a teeny bit as they have removed their name off the warehouse roof.

Back on board for a swim, 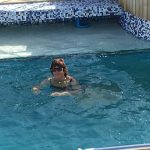 Pool to myself, lovely

during which time we continued planning our “party area” in the new house, (if we get it); for example where to put the Jacuzzi and the bar, and what size pool we need etc., etc. This was followed by dinner and the show; not so good tonight, it was the ships singers with the show band doing many Broadway hits.