We were travelling through the night, so we all had a disturbed sleep, but we were still all up for breakfast by 07.00, I enjoy the food on the boat, as they never seem to duplicate things, we had banana pancakes today, plus bacon, toast and fruit.

Our first trip out is at 08.00 am and we are going to Santa Fé Island, we have a wet landing so no shoes until we get there. Once on the island we saw the normal Sea-lions lounging on the beach, with their babies, some were swimming. 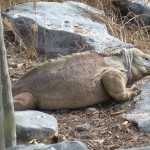 We walked all around looking at the land iguanas,  these are much bigger than the marine species, and mostly they are brown, we saw cactus that looked more like trees, a Galapagos 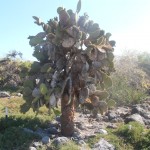 We returned to the boat, to be told it is snorkelling time, it was a bit of a rush, but I am so glad I went, we were swimming with the sea-lions for about half an hour, they would come up to you, and then suddenly change direction, it was brilliant, there were six or seven of them all playing with the group, fantastic. We saw lots of fish as well, but it was the sea-lions that we really enjoyed. Sadly they did not have a big enough suit for Geoff so he has missed all this fun, the water is quite cold, so he did not bother.

Back on board, we rested before lunch, after lunch we did the mating call of the blue footed boobies, and bought sticks and stones to Larry and Pamela, sadly they are leaving today, so we will miss them, as they are great fun.

Suddenly the ships bell rang, and there was a school of dolphins, followed by sea-lions, they swam with the boat, we reckon there were about 100 altogether all around the boat, it was an amazing spectacle, we watched for some time before they left. 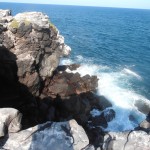 At 14.30 pm we lined up ready to leave for the South Plaza Island, which had sheer cliffs of the southern shore, where birds nest, we saw some Shearwaters, and red billed tropic birds, at 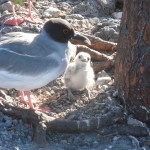 one point we saw some tiny babies sitting on the nest with its Mum.  There are iguana nests scattered all over the hill, so you have to be careful where you step.  There were plenty of land iguana’s walking around, and basking in the sun.

The Opuntia cactus is a smaller version of the ones we saw in Santa Fé, but sadly they are dying out, the scientist are trying to find out why?

Back on board, Larry and Pamela prepared to leave us, which are a shame as they were great fun, and whilst we were waving farewell, a Galapagos Shark or black tipped shark, kept us amused by keep circling the boat, it was quite a big one, and it stayed for a while.

Duncan gave a spontaneous talk on the stars, and we discussed American and British Politics with Donna, and then went to bed, knowing we were not moving in the night.