We were lucky this morning; breakfast was not ‘till 0700hrs, we had a lie in, wow!  More importantly, we had fried eggs, spicy sausage and ham together of course with slices of cheese and fresh, but sweet, bread, though the brown is more what we are used to.

The good news from my point of view is I had an excellent and full night’s sleep so felt much better today; the extra blanket helped. 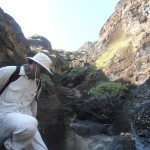 Duncan our Guide showing us the way!

At 0800hrs sharp we were being loaded into the dingy ready for our “wet landing” on the beach.  We had been warned this would not only be wet, but deeper than our knees so we were recommended to put everything serious into a plastic bag.  We were also advised to wear strong shoes as we would not only be walking up the mountain, we would also be walking up a narrow dried river bed, as you can imagine, we were riding the Zodiac with trepidation!!!

As we approached the beech we were fortunate that the sea 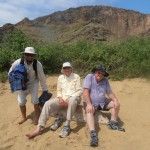 Duncan Larry and Geoff before we started up the hill behind

was calm and as we slid over the side we were pleasantly surprised as the water only came up to our knees but in Larry’s case his ankles.  Larry is a giant, very tall with size 17 size shoes, but a very nice guy all the same.

After donning our walking boots we started the climb and all seemed well then we hit the steep parts, good job we had decent shoes on our feet.  Duncan (our guide) is very good, he didn’t rush us and we all emerged at the top to magnificent 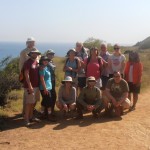 View from the top.

views all around us. It was here that filming took place for the Galapagos scenes in that excellent film “Master and Commander”.

After resting and admiring the views, it was down the other side but as they would then have to return this same way, I declined this next step and enjoyed the sun, sights and cool 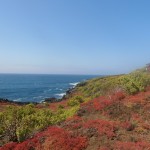 The other side of the hill was carpeted in red.

breeze at the top.  At one point I did have a rather magnificent lizard to keep me company, we had a chat though his vocabulary was limited or perhaps my Spanish accent was too poor for him!!!!

About an hour later, the party returned, chattering about the red footed Boobies and the baby chick they had seen also the 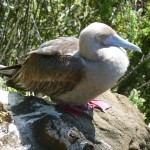 fact the landscape was much greener.  I was pleased for them but very happy to stay where I was.

After a short rest we started our descent, we didn’t realize how 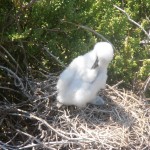 just steep it was coming up, going down seemed much more daunting: Anyway after several stops for a rest we hit the beach again.  The sea lions were still sunning themselves, the water was still blue and our boat looked peaceful at anchor in the bay.  It reminded us of Anam Cara, waiting to take us to the next beauty spot. Oh those days!!

Back on board, a couple of the youngsters took to the water, though with wet suits, and I took to the shower, it was very refreshing. 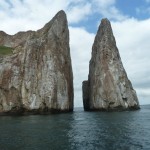 The “Beagle” then weighed anchor and we were off again to circumnavigate “Kicker Rock”. This rock is about 10 million years old, stands alone and about 500 ft out in the sea, and from several angles it looks like a lion, lying down. Christine and 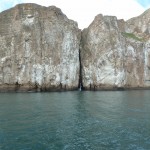 I thought it reminded us of the Sphinx that we saw whilst visiting Egypt.

A good lunch was followed by snorkelling in Punta Lobos lagoon 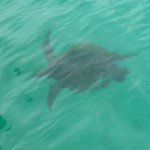 where they saw a few sea turtles and sea lion pups darting about and playing with them.  Three of us stayed on the boat and had our own show; we had the largest sea turtle I think I have ever seen visit us, we also had some sea lions and a school of white and black striped un-identified fish, all very exciting. 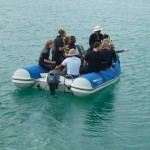 The snorkelling party returned back to the Beagle in one’s and two’s and once all on board, dried and changed, we were off again!  This time we were to make a dry landing though this nearly became 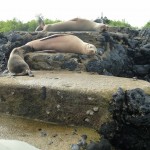 impossible as there were several Sea Lion mothers with their pup’s sun bathing on the landing steps.  We gave up on this set of steps and went to the backup steps, but again these also had mother and pups across them but something had to be done, as there was nowhere else to land as the coast line here is nasty with jagged rocks. 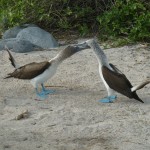 After much hand clapping the sea lions reluctantly moved and we all landed.  We then followed a narrow path but had difficulty passing several pairs of blue footed Boobys going through their courting ritual.  Naturally being in the Galapagos everything is protected so we had to find a way around them, but not until we had spent quite a lot of time watching this very fascinating courtship ritual where they stand on one foot then the other, touch beaks, flap their wings and the male whistles and the female grunts and if this is not enough the male picks up a small piece of wood and drops it at the female’s feet.  Apparently this can go on for a number of days or weeks before they actually get to “mate”.  We also spotted several male Frigate birds displaying their red 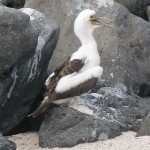 chests and a couple of nests in the trees.

After an hour or so we returned to the steps and guess what, yes you ere right, the sea lions were all back again, blocking our way.  This time we all clapped in unison and they moved.  Once we were all aboard the Zodiac and started our trip back to the Beagle, these sea lions returned straight back to the steps. Whilst all this was going on these sea lions made a dickens of a racket, protesting about us moving them.

After showers etc we all sat down to dinner and being Friday night, Christine and I enjoyed a bottle of red.  Larry, the “Father” of the group suggested tonight’s topic for discussion, so the  after dinner discussion was, ”how everybody proposed to their respective wives”, we all had a great laugh and eventually us oldies went off to bed around 2130 hrs, exhausted, leaving the young ones to party!!!