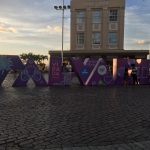 We were not due into Salvador until 1600hrs so had a nice breakfast and a leisurely morning. I went to a lecture on Brazil and Christine stayed in the cabin as she is still coughing and one degree under. Once we get off the ship in Rio and away from constant air conditioning things should improve. Once the lecture was over and following the obligatory coffee and brandy, we decided to start packing. We filled one case with everything we don’t need until we board the Queen Victoria on the 21st February; this will help us on Friday when we leave the ship.   We also started the process of gathering all the required information to make a claim for the Ships Hospital costs. We have never known such a palaver for a claim; what they want we don’t have with us, of course, so we have been sending e-mails far and wide to get the required information.

To arrive at the dock on time, we actually entered the large “Baia de Todos os Santos” (All Saints Bay) around 1400hrs where we collected the pilot. The entrance to this bay is very wide, but there were numerous freighters anchored all around us, which the Captain had to weave in and out to get to the dock. This was one of the more spectacular docking maneuvers this cruise, so most guests were up on top deck watching. We had to berth between a 4,000-passenger cruise ship and an enormous bulk carrier with minimal room for mistakes; still he achieved it smoothly and efficiently.

As we had had a hearty breakfast we missed lunch so decided afternoon tea was the order of the day before setting ashore; not so elegant or stunning as the Gala afternoon tea, but we still had the string quartet playing and more than enough of all those slimming cakes and buns etc.

Salvador was founded in 1549 and was the first capital of Brazil during the heyday of the slave trade, and this legacy can be seen today in its large, black population. It sits on a Peninsula on the North East coast of Brazil, which shields the town from the Atlantic Ocean. This city is the third largest in Brazil with a population of around 4 million and at the end of the peninsula there is a fort guarding the entrance to this safe anchorage. Today this is a naval museum. Salvador is also one of the oldest colonial cities in the Americas.

Once our ship was cleared by the authorities and we had finished our afternoon tea, the four of us “intrepid explorers” set foot in what had been described by Dotty as a dangerous place if one strayed from the main thoroughfare: we did. Firstly we crossed into the “badlands” to find a chemist to get something for Christine’s cough then rather than go back we cut across through a not so “thoroughfare” street to the large tourist undercover market; no issues so far. 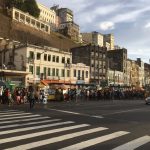 The road to the lifts

Naturally we don’t flaunt jewelry or mobile ‘phones etc., and we keep our wits about us. 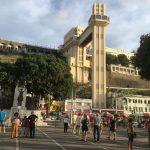 The lift structure built into the rocks

A big cliff divides Salvador; its lower town, (Cidade Baixa) and its upper town (Cidade Alta), are about 85 meters apart, “vertically” and there is an elevator tower housing 4 lifts taking about 30 or so people each trip, up and down. The cost of this ride is 15 cents, (local currency Reals) worth approximately 4 pence!!!! We joined the queue which was half way down the road and thought it would take forever but no, the system works well and we were soon at the front of the queue and herded into a hot, sweaty lift. Fortunately we were up to the top in a second so our suffering was minimal. 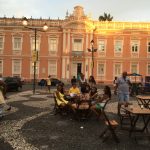 the lift into a magnificent cobbled area, surrounded with old, large buildings, museum and other local authority buildings.

Whilst queuing we got talking to a Portuguese family who told us there was some sort of show in the square where the Cathedral is situated.

Armed with so “much” information, the four of us followed the crowds, who seemed to be heading purposefully in one direction. The big area we in after leaving the lift, blended into another, large open space where the surface was smooth and flat. Walking through we passed numerous stalls 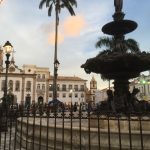 The square was vibrant with stalls, street sellers and of course beggers

selling the usual trinkets, and local arty-crafty things; there were buskers and children everywhere as we then entered a large cobbled square, full of tables and chairs and stalls selling alcohol, soft drinks and street food. At the end there was a band preparing so decided this must be it and sat down, ordered a few drinks and waited. Apart from more and 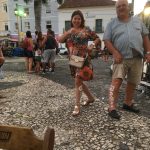 Geoff had his leg painted with another lady

more people flooding into this square nothing was happening though we did her drumming in the background and assumed this was the start of things. Still nothing was happening so David went to investigate. He reported back that there were lots of drummers walking away from our square, oh well the ambience was good and our waiter reminded 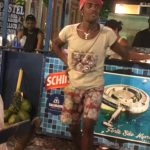 Our waiter , he was mad as a hatter

us of Huggy Bear, a character from the old TV program, Starsky and Hutch; but probably more entertaining.

After a very enjoyable interlude we realised the drummers 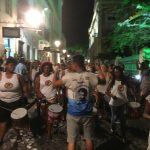 weren’t about to descend into the square so we headed back to the lift, and onto the ship, however, we were accosted on our return. 4 Police Motorbikes, with 2 policemen on each, armed to the teeth, surrounded us. They babbled on but we didn’t understand a word they said so got out our I.D. but that wasn’t what they wanted; apparently some other tourists were mugged and they thought we were they.

Back on board it was party night on board, Christine wasn’t quite tickety boo so went to bed, and then David and I went to listen to the music.

Next morning we were up and away fairly early as the ship sailed soon after lunch and we had places to go and things to see.

Back into the lifts, across the three squares and straight to 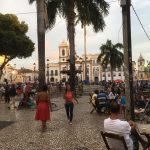 the Cathedral, but more importantly the 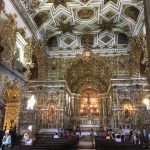 Inside this amazing church covered in gold leaf

“Sao Francisco Church of Salvador” built in the first half of the 18th centaury. This church 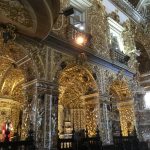 Alcoves also covered this place had the wow factor

has an interior to behold, all the walls, ceiling, acolumns, alter and side chapels are gold. All this sculptured woodwork is covered with gold leaf and is the 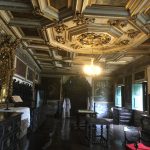 One of the side rooms

original, yes in places there is wear due to its age, but on the whole it has stood the test of time well. 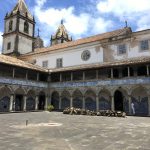 Attached to this splendid church is a convent, no gold leaf here but a number of the old wooden ceilings have religious scenes painted on them. There is also a rather large courtyard with all the surrounding walls covered in tiles depicting various biblical scenes.

We spent too much time admiring the interior of the gold leafed church we hadn’t left sufficient time to go over the cathedral, 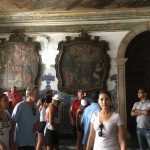 Some of the original pictures on the wall

though from what we had heard, after visiting the Sao Francisco Church of Salvador, nothing else comes anywhere 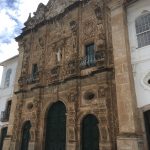 Ornate frontage on another church

near it for beauty and opulence. 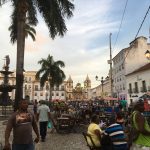 importantly “loos” were required. We found a small hotel: Parked ourselves on an outside table and rested, enjoying the Brazilian cocktail “caipirinha” (see below); well I didn’t, I had the usual as I find Caipirinha too sour.

David and Christina shot off to look at the Cathedral, whilst we waited. When they reported back they said we had already seen the best; good job we stayed behind!!!!! 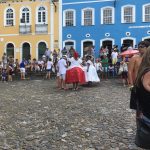 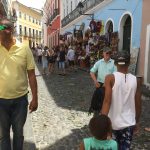 Such an exciting place

shops. They were very attractive to look at and we were pleased we went, but when we got to the bottom and looked back up the hill, we were shocked and caught a taxi; well we did, our friends being younger went 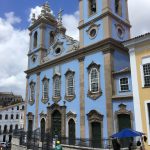 Another church on route 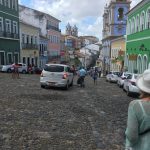 Back onboard we had a casual afternoon before dinner. Tonight’s Showtime was called “Tuxedo”, a show featuring the ships singers and dancers taking a fresh look at music by such artists as Frank Sinatra, Tony Bennett, Natalie Cole and many more. The singers did a good job, very entertaining but we couldn’t think why they had the dancers. Due to it being a small stage the ship only has 2 dancers and as far as we were concerned they were superfluous to the show. “Still, it is what it is; get on with it”. 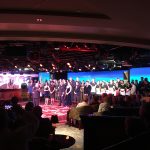 The Captain and his crew

Tonight was also a farewell night; at the end of the “show” all the crew came on stage and the Captain and Hotel manages did their farewell speeches, usual things, thank everybody for coming, thanking the crew for their hard work, and probably more importantly from Oceania’s point of view, hoping everybody will return for another cruise.   At this point the crew made a lot of noise as everybody joined the singers in a rendition of “Auld Lang Syne”. When we exited the Sirena lounge the crew lined the corridors and applauded.

Christine trotted off to bed, and I went to horizons with D & C for a nightcap, or two!!!

Tomorrow is another sea day and then Rio the following Lunchtime