Sunday was raining most of the day, so we decided just to stay put, clean up, and just relax and read. 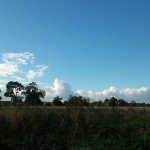 Monday morning was sunny, so off we went, the man in the Marina said that the River Nene was lovely once you past Wellingborough, but we really didn’t notice any difference. The locks 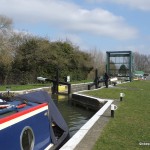 were mainly guillotine style, and if they didn’t have the electronic system, you had an enormous wheel, probably about 30 inches in diameter which you had to counter balance this large sheet of metal, it’s heavy weights, really hard work, it took ages to open the gates. 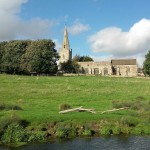 The scenery was changing less hills, more fields and open spaces. We did 12 miles and 12 locks, some of them were easy others were more difficult.

We had decided to go to Thrapston, hopefully to moor up and visit the 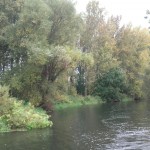 town, the book said they have 48 hour mooring with all facilities, but could we find it, No, so we ended up at a sailing club out of town. Shame cos we were looking forward to seeing what was on offer.

Woke up to rain again, but we decided as we have only got a seven day pass, we have to get back, so we dressed accordingly, we had to turn 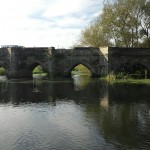 the boat which was worrying me, as this river flows fast, and also is not very wide, being 60ft not an easy task. Anyway we went further downstream, found a spot and easily turned, I was quite relieved about that. We then started making our way back, met up with another couple who we shared the locks with, although we still found it hard as the wind was blowing the boat around, when we came out the locks, so we changed plans. I would help Geoff take the boat out secure it to the moorings then go back and shut the gates. As we were going upstream , we had to leave the big guillotine gates open, so after we shut the gates, I had to go back and either turn the wheel and open the guillitine again, or use my finger for the other kind, either way it took some time. I think the other couple got fed up with waiting for us, so they went on. We also stopped for a token for the sewage machine, which we bought at one of the chandlers on route. The weather improved about midday, the sun came out and we enjoyed the trip back. 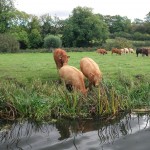 We finally arrived back in Wellingborough and we were both pleased, out of all the things we have done on this trip, we were not impressed with the River Nene, there is nowhere to moor, mostly the river is overgrown and full of rushes, no pubs on the canals at all, hardly any boats, pretty scenery, but no character.

Struggled to get on the water mooring, as someone was moored in such an awkward spot, anyway we did it, filled up with water, at the same time as having showers, we also emptied the sewage, but messed the pipe up, so we had to notify the Environment Agencies, they are sending someone out! We moved further up the river, cooked dinner, and played cards, and I lost badly! Time to go to bed….