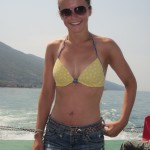 We are having a ball, which is why no log, we met Mark Paula, Tyla and Ashleigh, and we spent the evening catching up over another lovely meal, how I drove home 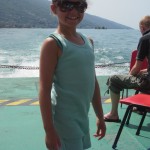 Just wait until I am older!

that night, I will not know, in fact I don’t remember a lot except losing the door keys, and having to climb in through the back window, fortunately we left it open, but the bad news was everything was wet, as it had poured with rain. I was out for the count, so not worried that the bed was wet; apparently it wasn’t my side anyway! 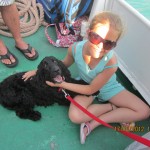 Next morning, I sorted the wet covers out, with a very heavy head, self inflicted, but we had a fun evening. Whilst I was pottering, Geoff found the keys in my bag, must stop this drinking lark! The day was a bit of a slow one, but I managed to prepare a bbq for Geoff to cook, the family were coming over in the evening, (so no driving for me) we had a lovely evening, and the bbq was perfect, well done the chef.

We moved house on Tuesday, instead of loading the bikes on the trailer, Geoff rode to 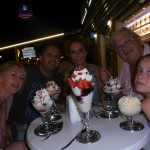 Mark’s and left the bike there, and Mark bought him back, we then put everything away, had a swim, and left about 2.30pm, we couldn’t get into the other site until 3pm, even when we did arrive we were left outside the gate blocking the road, as they wouldn’t let us in, I drove down on my bike, which was funny following Rosie.  We sorted ourselves out, then went over to Mark and Paula’s for dinner, spaghetti Bolognese, very good, this time we walked. We played Uno, where I was winning up until the last round, and then they all stitched me up, Geoff then won. We then went to an amazing ice cream parlour, where I had the biggest ice-cream ever, with fresh fruit, ice cream, and the dreaded squirty cream, besides the cream it was lovely, we all had different ones, and very good they were 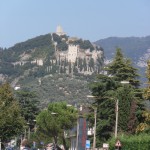 Another lazy day, spent by the pool, in the evening  Mark and Co., cycled around and we enjoyed another bbq cooked by Geoff, a lovely evening. Paula was seen to be wobbling on her bike as she left the site, but Mark texted to say they were all home safely.  We have arranged to walk up to the castle in Arco, will they turn up.

9.30am, everyone was ready for the climb, twenty minutes from the bottom, and uphill all the way, needless to say 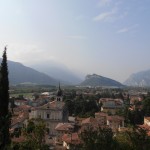 View from the very top, stunning!

Geoff did not do it, he stayed with Mark having a bonding time, with coffee’s, and a trip to the supermarket.  There were spectacular views at the top, the climb, was some steps and some slopes, but it was not as hard as I thought it would be, glad I made the effort. 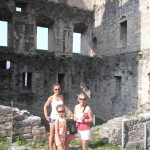 The way it was organised you went up one way, and came back another, a good system accept it was through woods, and you had to be careful not to slip, but we eventually 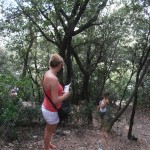 made it down, my legs were wobbling when we were at the bottom, I thought I would suffer, but no after effects.  We met up in the cafe, had a drink, and then we went our separate ways. 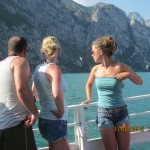 We had planned to go on a boat trip today, with the dogs, so having bought muzzles for them, (they are not allowed on the ferries without them) Mark picked us up early 8.30am, he then went home to get the girls, and they cycled down to the ferry. We all got on, and we enjoyed the trip around the lake, the views are amazing, it is 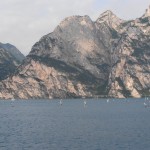 such a stunning area, we decided to get off at Assenza to have a look, nothing much there, so we sat and had aperitifs, waiting for the ferry to pick us up again, back to Malcesine, a much bigger town, we were going to go on 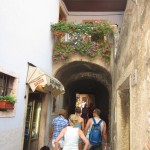 cable car, but there was a couple of hour wait, so we gave that a miss, the town is very pretty, with lots of little shops and cobbled stone paths.  We had a lovely lunch, and then we just managed to get the ferry back to Limone.

Limone is a bustling little place, cobbled stones again, with lots of shops, Geoff bought me a skirt, which is really 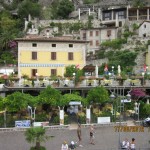 unusual, and very expensive, Tyla managed to get a dress as well, but Ashleigh couldn’t find anything she wanted, another day perhaps, I think Paula is having a girly day there with her friend Alison later in the week. 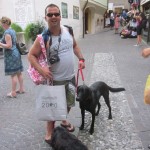 Mark lumbered with dogs and bags, but still smiling.

We left Limone about 5pm and caught the ferry to Riva Del Garda, what a lovely day, we had ice creams at the ferry port, and Italy is certainly a very scenic place.

Saturday was catch up day, with the washing and ironing, we went swimming in the pool,  and took the bikes to Limone, more stunning views, and we then had a relaxing evening, playing dominoes, and I actually won!!