Up and at ‘em this morning, early breakfast and waiting for our “all day tour” of Rio de Janeiro to begin. We did consider a ½ day tour as it basically covered much of what we wanted but with minimal stops, whereas the whole day did a little more, plus more time at vantage points and included lunch, all for an additional 50 Reals each: no contest.

We were down in reception at the appointed hour and we were picked up and marched to the tourist office, uh? We were told there would be a car or van to do this, oh dear we thought, have we picked a dud. Anyway at the office we met our tour guide, Julio, a fluent English speaker so things started to look up; he then marched us to our coach, a very modern, comfortable coach and off we set to collect a few more passengers.   Once all aboard he gave us a quick summary of the day’s events in Portuguese, English and Spanish, a very accomplished young man.

First stop, the Sugar Loaf Mountain, a two cable car trip. Being on the tour certainly paid dividends, he had the tickets and we were on our way, no queuing here. We arrived at the first stop and had 20 minutes to get acclimatised to the thinner air and look around; ha ha! There were 2 old cable cars on display; the first one was built in 1912 and carried 22 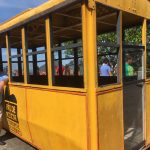 passengers and was used until 1972; so, this would have been the one I went up in when I was 5, back in 1949; it was very open and obviously a risk to health & safety; how my mother kept me sitting down, or more importantly, kept me in that car, I know not how! 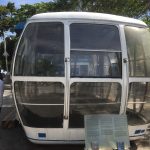 The second one was used from 1972 to 2008 and was featured in Moonraker (James Bond film). They continue with those introduced in 2008, which carries 65 passengers, and travels the distance in ½ the time. 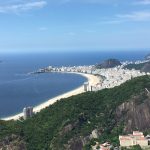 Views were fabulous looking over Rio

Next up to the rarefied atmosphere at the top. Wow the views are stunning all round, the domestic airport, 2 of the 4 forts 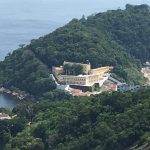 One of the forts built by the portugese

built by the Portuguese, Copacabana beach, a couple of marinas, most of Rio and much, much more. Having had a good long look round we grabbed a coffee and started the decent, arriving at the bottom we were picked up by our driver. When we booked we had to take pot luck with the weather; though warm we are surrounded by rain forest and we could have been unfortunate and suffered clouds etc., but no, we had a beautiful, extremely hot, clear sky; couldn’t have been better. 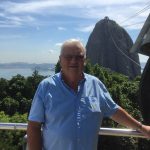 Geoff with Sugarloaf in distance

The sugar loaf mountain is one of the iconic sites in the world; it stands at the mouth of Guanabara Bay and rises 396 meters straight up from the Atlantic. The reason it is called the “Sugar Loaf Mountain”, apparently, is that it reminded folk back in the day, of the traditional shape of a concentrated, refined sugar loaf.   This became a World Heritage Site in 2012. 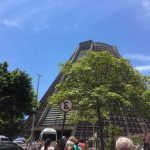 Next stop the Metropolitan Cathedral, a monumental modern building seating a congregation of 5,000; certainly not a conventional cathedral but apparently very well appreciated by the 6.5 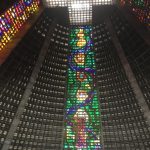 Lots of stained glass strips, joining the cross at the top, quite impressive

I think it’s time for a little background to Rio. The Portuguese rulers were the first ones to rule Rio as they landed on the soil of Guanabara Bay on the 1st January 1502. The bay forms the opening of a river, hence the name “Rio de Janeiro” which means “River of January”.

In 1555 the French sent a posse of 500 troops to get a piece of the action and a foothold was established by occupying the largest Island in Guanabara Bay. The Portuguese finally kicked them out in 1563 and to ensure there were no more trespassers they built a ring of forts around the bay, which were so well designed and sited, nothing could get past them from the sea.

In the earliest part of the 18th century Gold and Diamond mining took place, which gave the area a big economical boost and at the same time drew in hundreds of European settlers, but this was short lived. Towards the end of the 18th century the mines started to fall into disrepair and the towns economy drifted away. Everything is cyclical though, in 1808 Coffee was the thing to be in and the Rio Economy boomed again. Brazil got its independence from Portugal in 1815 and from that time Rio not only prospered but it laid the foundation of what the city has become today. 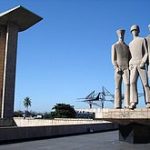 On our way our guide pointed out the Countries War Memorial dedicated to those who died fighting in the war. I thought Portugal was neutral during the war, and Brazil was Portuguese so assumed they were neutral as well, so at the first opportunity I was going to “collar” our man and find out more. It turns out Brazil sent 25,700 troops in 1943 to “help” the Americans in the Italian campaign; 943 were killed in action and many of their remains are in this memorial: you learn something every day!!! 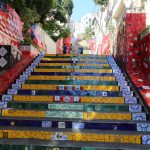 Iconic steps, they were amazing colours

Our next stop was the “Escadaria Selarón”, also known as the ‘Selaron Steps’. These are a flight of world-famous, decorated steps, and are the work of Chilean-born artist Jorge Selarón 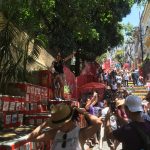 These steps attract a lot of tourists vibrant part of town

who took 15 years to complete the tiled decorations. He claimed it as “my tribute to the Brazilian people” Unfortunately due to depression he toped himself in 2013 though his spirit lives on, here in Rio. 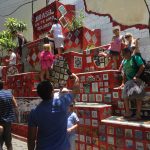 Driving to the steps we passed the Carioca Aqueduct, which was built in 1723, during “colonial Brazil” to help solve the problem of water shortage in the city. If you didn’t know, you would have thought the Romans had been here! Today the 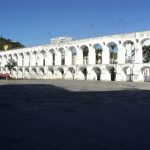 Aqueduct carries a light train or tram up to the upper district .

Next stop lunch, we were told we were having a bar-b-q at Copacabana, but before I go on I must mention that round the corner from our hotel is, what looks like a very nice Churasscarias, and we decided we would try it towards the end of the week; you know when we can do it justice. Anyway we got off the coach near the tour office and followed Julio down the road, round the corner and bless my soul we went into the Churasscarias we had been talking about. Well it was marvellous; the various meats just kept coming until we just couldn’t eat another thing. I know there is an Argentinian one in La Zenia but this was the real deal, here in Brazil. Over the years that we have done coach tours that include lunch, none have come anywhere near as high a standard as this lunch, well done “RioLine”

Waddling out of “Carretao Classic Grill” we headed for the coach and onto our next port of call, the Maracanã football 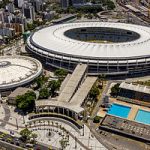 stadium, built for the 1950 inaugural FIFA world cup. Judging by what we were told, Brazil, with its very posh and big stadium was confident of winning that tournament, but at 1 all, in the last few seconds Uruguay scored the winning goal. This still rankles and I remember this still being talked about in Uruguay when we were there a few years ago!!!!!!!   Not being that interested in Football and having seen numerous stadiums around the world, we rested our stomachs and stopped on the coach.

Now we were on our way the Corcovado but stopped to see the 1 km avenue, lined with “permanent” concrete stands 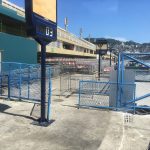 Stands for fiesta, wish we were stopping now!

where the Rio Carnival passes by and the floats, costumes etc., are judged. 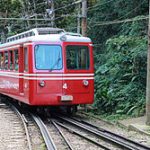 Bit scary when it stopped in the middle of nowhere

We arrived at the base of the Corcovado Mountain and changed our mode of transport from a coach to a train. This train was inaugurated in 1884 and cuts through Tijuca’s National Park, a part of the so-called Atlantic Rain Forest, or what’s left of it!! 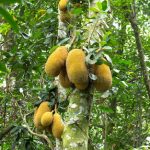 Wild Jackfruit, these are eaten as a substitute for meat, as they are very fleshy inside, and taste similar to chicken

The “Puffing Billy’s” were replaced with electric trains in 1910, but in 1979 the current, more modern and safer trains were imported from Switzerland.

This single tracked railway with passing places delivered us to the top with ease and now I thought, ‘Oh God’, I have millions of steps to climb and I cant think of an excuse not to go. But to my delight and great surprise they have installed lifts to the base; thank the lord, this saves climbing the 220 steps 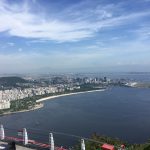 that we were reliably informed were waiting. 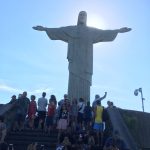 Amazing, is all I can say, fab-u-lous

We get out of the lift at the base; well below the base actually, but I think to myself, I can do the last few, but no. We spotted an escalator; wow how good is that? It was a two-stage escalator, but I’ll forgive them for that, then hey presto, we are walking around the base of this monster statute. To get a better angle of the statute there were mats supplied for people to lie on and take a picture; well done Christine 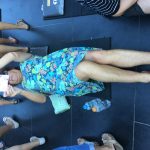 Seemed to work, we got some good pictures

for entering the spirit of it.

Christ the Redeemer’s construction started in 1922 and was completed in 1931, though the original idea was muted by a Vincentian priest, Pedro Maria Boss, in the mid 1850’s. The statute stands 38 meters tall on its plinth, and on top of mount Corcovado, that itself is 710 meters above sea level. This monument became one of the 7 new wonders of the world in 2007. 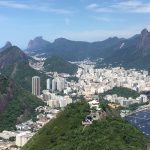 Views from the top

Joking aside, I would have been mad not to have climbed the steps had there not been a lift. I thought the views from Sugar Loaf were stunning, but these are even more stunning, though you cant see too much detail, you get a far better prospective of Rio de Janeiro and its surrounding water, islands and its sheer size. 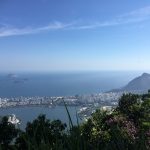 Stunning views from the top

Again the weather couldn’t have been better, yes there was a heat haze but nothing to what it could have been, surrounded in 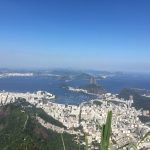 You have to be there to experience the fabulous views

clouds more often than not.

Back down on the railway, Christine was fascinated by large round yellow/greenish, presumably some sort of fruit, but not sure. That is her task to find out.

We were dropped off our coach a little after 1800hrs, just round the corner from our hotel so we popped into “our” local restaurant for a coffee and tea supported by those wonderful Portuguese custardy tarts, yummy yummy.

Back to our room, its getting past our bed time and we are thoroughly knackered after a fantastic day enjoying Rio.