We stopped overnight under reading bridge; well it was free, and it was surprisingly quiet for a public thoroughfare!!! Today we headed west buying Diesel along the way and enjoying the sights as we meandered along the Thames on this glorious sunny day; wow we have been so lucky with the weather. Washing was a priority and the first launderette we could find was in Pangbourne, so this was our 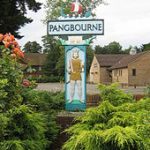 destination. The weather now changed and the rain came down but we arrived and moored alongside a field about ¼ mile from the town. We found the Launderette then wandered around the town until the washing was ready. Pangbourne has also become a centre for high-end sports cars with a Lamborghini and Aston Martin dealership in the town.  We stayed overnight listening to the patter of the rain.

Next morning we headed off again, Wallingford was our target for 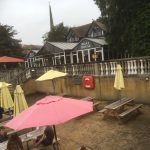 No problems mooring this time

tonight. We arrived early afternoon and moored just past the Pub where we had had a meal with Andrew a couple of years ago whilst travelling the Thames in Dave and Leisha’s boat, “Foggy’s Notion”. It was encouraging to note, Wallingford council welcomed boaters, (unlike some places we’ve to) and set aside visitor moorings, though for a fee of course! 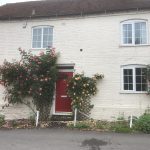 Pretty cottages near our mooring

Wallingford again has a history that surprised me. Firstly it became an important Thames crossing point and was fortified back in early Saxon times, and particularly by Alfred the Great, to protect Wessex from the Vikings. There are also the remains of the castle built by the Normans;

this castle was the also last stronghold of the Empress Matilda against her Cousin Stephen, later “King Stephen” (1135 – 1154), this time in 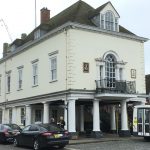 History is sometimes known as the first English Civil war. Wallingford was also important during the “Civil War“; it was the royalists’ last stronghold in Berkshire (nowadays Oxfordshire) and after a 65-day siege they abandoned the town and Cromwell set about destroying the castle; much of the stone was used to build the clock tower of St. Mary- 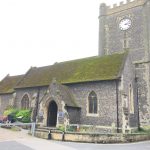 le-More, the historic church in Wallingford.

After securing our overnight mooring spot we wandered around this very quaint and pretty historical town, though it wasn’t raining, it was very overcast and cold. Next morning Christine dashed over to Waitrose before we left and headed towards our next stop, Abingdon.

We had an uneventful run up to Abingdon, moored up alongside the town park but as it was raining stayed on board. We had “done” Abingdon on our previous travels. Around 2100hrs the rain suddenly increased and this continued well into the night, the sound was amplified as it hit the roof and the thunder and lightening felt as if it was just above us. Here we are in steel box with an aerial poking up from the roof, perfect conditions for a strike!!!!! Eventually we got off to sleep wondering what everything will be like in the morning.