We were up early, I had lots of birthday wishes which was lovely, and because of the time lapse, they were all there when I woke up.
Breakfast was taken, and it is still raining, Mike loaded the car, and off we went, and the rain kept coming. Fortunately it’s a Saturday, so not much traffic, but we saw cars in the ditches, and stranded, a terrible drive. The closer we came to Fort Lauderdale, the sun was trying to come out. We arrived at the rental place, where they bar coded the car, it was amazing, we were worried because we had lost the paperwork, but within minutes, he had checked the car, and cleared us.
We were then taken by shuttle to the ship, Island Princess, after queuing we managed to get on the ship, and wow, what a lovely room we have, so much room, it’s amazing.
The ship is much better than Norwegian in every way. The captain is British, and some of the crew, but most of all, although we are in the minority we do get a mention, where as we were in the majority on Norwegian but you would think it was all American!
We went to lunch, and met a lovely couple from Louisiana, they were really funny, and it was lovely spending time with them. After lunch we went back to our cabin, where we unpacked our clothes, and got sorted for the cruise.
Everyone had to do the safety first drill, so as we are in Group A, we had to go to the Theatre, the briefing was very thorough, a lot different from Norwegian, as we did not hear what they were saying! A quick shower ready for the evenings festivities.
We then met Mike and Jan, had a pre-showdown drink, then went to the Theatre, where we watched the welcoming show, they had singers, dancers, and a very good American comedian, we then had dinner, and then the waiters sang happy birthday to me, and presented me with a birthday cake, which we all enjoyed.
After dinner we went into the Wheelhouse Bar, which I knock named the whistler, lovely room, with leather settees and chairs, very comfortable, they had a guitarist playing, who was very good, we left there and started exploring, more of the ship, and ended up in the indoor pool area, where we played table football, the boys beat us easily, obviously their misspent youth, we then played ping pong, well at first I couldn’t even serve, but I soon got the hang of it, and we lost, but only on the third game.
Well thanks everyone I have had a really enjoyable birthday. 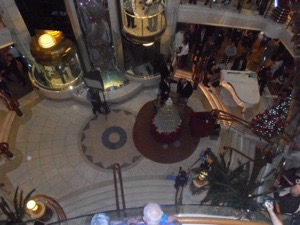 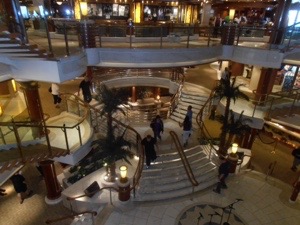