We went to bed with it raining, thunder and lightning, and woke up to the same, it hasn’t stopped for 24 hours, we decided to go to the Theatre of the Sea, in Key West, rather than staying in, so off we went.

Well when we arrived it had stopped raining, so we asked at reception what was happening, and was everything continuing, he assured us yes, so we paid our money, went through the doors, and down the rain came again, this time it was worse, we laughed, hid under the umbrellas and waited to see. The lady turned up to do the 12am tour, so off we went, we saw turtles, most of which had been damaged in some way, Nursing Shark, lots of species of fish, she was feeding them as we went.
We moved onto the parrots, which we were allowed to hold as there was only four of us to watch the show, she explained about the parrots, got them to do tricks etc., they were intriguing.
After Parrots came the Dolphins show, my favourite bit, they were brilliant, the tricks that they did were fantastic, I even got to kiss one, one of the girls went into the water, and the tricks they did were fabulous. After half an hour of watching them, they moved us onto the Sea Lions, that also was a fantastic shown the lady got the sea lion to smile, balance balls, poke his tongue out, and so much more.
We were allowed to stand next to him, a very very good show.
We then. Moved onto a bottomless boat, where a dolphin did a trick where he jumped through a hoop and rang a bell.
Despite the weather, we had a fantastic day, the way they ran the whole theatre, was efficient and very very good, I think we gained as the weather was bad as not many people were there, but they didn’t stop doing anything, in fact we could get up closer to the animals.
Well worth the trip.
We left there, soaking wet, we found a Dunkin donuts, had a hot tea, and of course a donut, then headed home to dry off, and get the washing done, yes it’s still raining!
We decided to go back to Denny’s as I didn’t want to drive, and the boys had had a drink, we had a lovely meal there, and played Sequense, the evening finished in a draw. 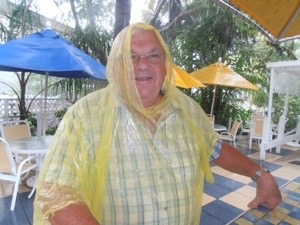 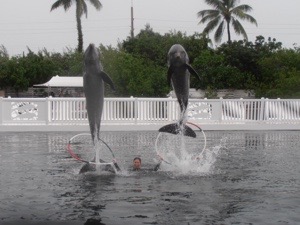 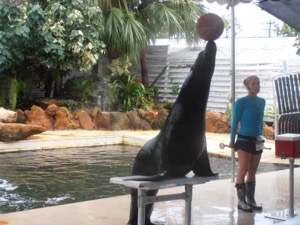 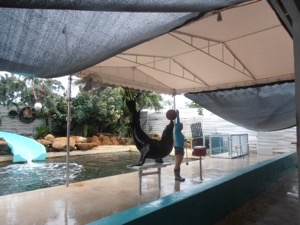 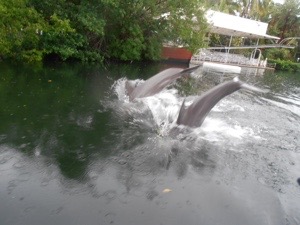