Thursday 25th April We woke up after a fairly good night’s sleep but in my case quite sore; I don’t think I have slept in such a hard bed.  Still, we slowly got up, showered, though the water was either very hot or cold, and so to breakfast which was a bit of a shambles, not quite what we have been experiencing ’till now. Coffee un-drinkable, Christine’s tea cold and looked as if it had a second hand tea bag in!!! So after a few words, Christine had hot tea with 2 new tea bags delivered, and I swapped this poor imitation for coffee to Camille 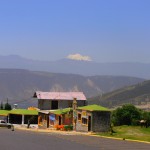 View of Volcano in distance

tea, so all was OK in the end. This is not my sort of hotel I have to say so we won’t be back. 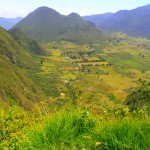 Farming in the middle of a volcano

1000 hrs we were waiting in the lobby when our guide/Driver arrived.  He was a very pleasant chap and immediately we realised he had a sense of humour, and spoke very good English, that was a good start   Firstly he gave us a little background and history to Ecuador which I found interesting but Christine switched off, history is not one of her strong subjects! Quito lies in a valley and was started in the 15 hundreds by the Spanish conquistadors and today is stretches 65 Kms from north to south and approx 8 Kms east to west and It has a population a little under 4 million and lays on and south of the equator.  In fact Quito means centre of world.  Before the Spaniards invaded and colonised Ecuador, as well as most of South America, the dominant civilisation were the Inca’s, as we knew from Peru, however, when excavating a valley several years ago, they discovered some wood and sent it back to the States for carbon dating, it appears there was civilisation here 3,000 years BC. So we were off on our way, firstly to a huge volcanic crater North of the city, just in the northern hemisphere, it has been created into a sort of national park.  We crossed the equator several times during the morning as will be described later.  Ecuador including the Galapagos have a total of 55 volcanoes, most dormant though one of the ones on the outskirts of Quito erupted as recently as 1990, fortunately there is a small valley between that volcano and Quito so the lava was held back though the city was completely covered in ash, sounds like a lucky escape. 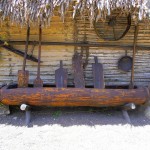 Tools that were used

Angel, our guide, then took us to a very interesting museum, Christine was a little sceptical about visiting a museum however once we arrived she was happy.  This museum was mainly about some Amazon tribes and the Equator.  I won’t bore you about the tribes, just to say I wouldn’t like to meet any on a dark night in the Jungle.  The museum guide showed us a couple of shrunken heads, quite amazing and several hundred years old but well preserved, even down to some nasal hairs still in place!  Anyway the other part of the 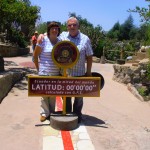 Standing on the Equator, I was in the North and Geoff in the South

tour was all about the equatorial line running straight through this museum.  Naturally we had ‘photos of us straddling the line, Christine in the northern hemisphere with me in the southern, etc etc.  But none of us in the museum tour party realised just how immediate things changed either side of the line.  One simple example was water flowing out of a tub.  We all know that in the north it goes down clockwise and south anti clockwise but on the line it goes straight down but when you move this tub only about 1 meter, the northern or southern pull takes effect.  This neutrality was also demonstrated by the guide firstly with 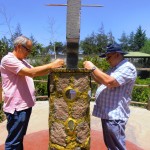 Balancing an egg on a nail

balancing an un-cooked egg on top of an ordinary nail, none of us managed though it!  Also, walking along the equatorial line, none of us could keep straight as the two opposing forces were causing us to fall off balance though but if you do it away from this line, no problem and there were other examples demonstrated.  I have to say this visit was not only a fun experience, but it was quite an eye opener.   We were also lucky with the weather, the sky was clear and blue so we could also 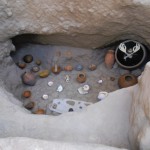 see the only volcano in the world that has the equator going straight through the middle and to make it easier to pick out, it still had snow on top. The original inhabitants had the equator marked where they thought it should be and lived by the Calendar that this position of the “centre of the earth” line produced.  They were 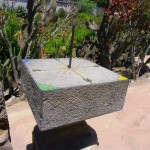 experts in studying the sun and other astronautical events until a Frenchman arrived with his modern measuring equipment in 1735 and said the actual line was further south.  In 1990, using GPS they calculated the line was actually 189 meters further north from where the French thought it was, not bad you may think, however where GPS said it was, was exactly where the ancient tribes had it in the first place, they knew a thing or two! 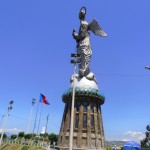 Next to the top of a hill with a huge statue of the Virgin Mary but with a difference, here she had wings and was holding a chain with a crocodile on the end.  This was very symbolic to the majority of Catholic locals when  built and it did afford us 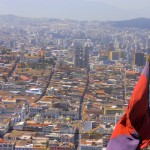 very good views of just how sprawling Quito is from this vantage point. Now we went down into the old town where we had to park the car in a multi storey car park and travel on foot, fortunately it was fairly flat and though we were on the equator, not too hot. 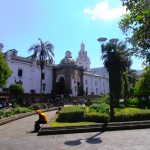 We walked around the original Plaza laid down by the Spaniards; this was surrounded by the Presidents palace, the Archbishops Palace, a Basilica and modernist government offices and a very nice looking hotel where I wish 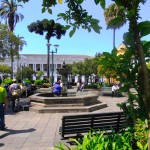 we had been booked into!!!!

We then went into the obligatory 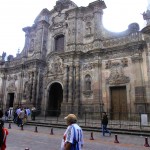 church, we went in because we thought we had to but once in, wow!  This Jesuit Church took 160 years to complete and it was covered inside from the top of the high dome down to the floor in either gold leaf or original paintings, no 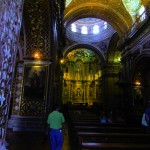 Inside church we were not allowed to take photos!

wonder it cost us $3 each to enter and the security was everywhere. We then strolled down through these old and in some areas original cobbled streets to a local restaurant for lunch. 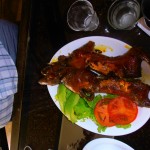 I was hell bent on having guinea pig, like Peru, a delicacy in Ecuador, I even persuaded Christine to have some.  It was nice, a little fatty; it reminded me of a suckling pig we had a couple of years ago in Spain.  We have tried it now so no need to have it again. Back to the multi Storey car park then returned to our hotel after a very interesting and enjoyable day that was not all about visiting Churches.  Angel had done us proud and he was never pushing us to hurry yet this 5 hour tour which took a bit longer seemed to go very quickly, hence we treated him to lunch When we arrived back in our room our laundry was waiting so we started to pack ready for leaving the hotel tomorrow at 0630 hrs, ouch!!!!