Christmas has arrived and are pleased we are experiencing a much different acknowledgement of the festive season, here on board than we did when we spent Christmas day travelling from Los Angles to Chicago on a train back in 2015. The ship is decorated throughout the public areas and we were even given a present, a very impressively gift-wrapped, expensive looking

Not sure if we have room to bring it back!

box containing a commemorative globe of our Christmas Cruise; we were impressed.

After enjoying our customary tea in bed delivered by our steward, naturally, we made our way to breakfast where we had steak for a change, washed down with an excellent glass of Champagne. We weren’t in any hurry as the ship wasn’t due to dock ‘til around 1030, and we had been here before. We did look at a couple of tours but nothing really impressed us and the cost certainly didn’t!!

Whist getting ready for breakfast, suddenly there was an announcement on the public address system saying there was an unusual blip on the radar screens and upon closer inspection noted it was heading our way; there was mild panic in the announcer’s voice especially after Trump had managed to persuade the UN to up the sanctions against North Korea. Apparently it kept coming closer and closer and when consternation was at its peak, the bridge received a message, asking “permission to land”. Before giving permission and upon closer inspection this object was close enough to identify; no 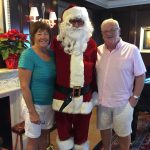 it wasn’t a UFO, it was Father Christmas!!!

Naturally permission was granted and we all managed to meet him, he was looking a bit tired, after all where we are in the part of world that is his last port of call. We had a very nice but brief encounter with him and had our picture taken at the same time.

Once docked we left the ship, walked down this rather long pier and into the town but being Christmas day wasn’t expecting a lot. The area immediately in the vicinity of the pier was teaming with locals, firstly the stands selling touristy things; naturally they wouldn’t miss such an opportunity to sell their wares and secondly locals enjoying Christmas in and around the beach.

Before leaving the ship we talked to the local tourist representative who had come aboard and he pointed out a couple of things worth going to see. So after walking the length of the beach area we consulted the map we were given and headed to the place they call here “Downtown” where we will find their church, a museum and shops though being Christmas day they may be closed. Also there is a market in the same area. 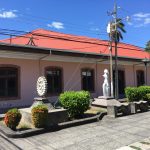 it!!!! As we walked past the museum, it was open for business but we carried on around the corner to the church but this was closed for business, which we thought rather 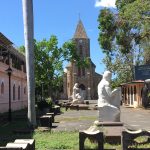 Local church, closed even though its Xmas Day

peculiar, as it was after all Christmas day. There were some seats around so we took the opportunity to sit in the shade, consume water and make a few ‘phone calls. Dotted around were a number of sculptures, no doubt part of the Museum, which incidentally, when we went past the second time, around 15 minutes later, was also closed.

OK, now to find the Market, this time after trekking around in the heat there was no sign of it. We presumed as we were not in the normal area tourists visit they didn’t bother to open, though we did come across some shoe shops, clothes shops and a supermarket open for business; how does that work?????

Back to the beach now; we had taken our swimmers with us but 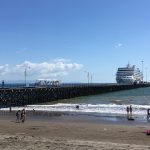 the dark colour of the sand didn’t invite us into the sea for a swim, however we did paddle. I have to say the water was lovely and warm, perhaps quietly we thought we 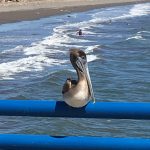 Pelican was more than happy to pose for us

had missed out not going in for a swim.

Time to get back for a light lunch, we were very hot and a swim onboard and a laze in the sun sounded perfect, accompanied with suitable cocktails.

Christmas dinner tonight, we were looking forward to this 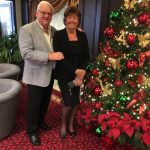 No formal nights on board, but most dressed up for tonight

especially after the head chef said on the morning news channel what he was doing, so back to the cabin to get ready. We started by visiting the Martini bar and sat down with a couple from Australia where the conversation centered on what we thought of Oceana as a cruise line. This was interesting as we all had similar thoughts; food, exquisite; service first class; staff to guest ratio, magnificent; Comfort, second to nothing; beds un-believable, and the best thing of all free Wi-Fi throughout, but then we came to discussing the entertainment. Under normal circumstances we would be happy with what was provided but as everything else is top notch, we assumed the entertainment would also be but alas, it is lacking. Yes, we had the best magician/illusionist we have probably ever seen, and the comedian was very good also, but unfortunately that’s where it ends. We agreed that with a ship with only 680 passengers; a regular floorshow in its own theatre was probably un-realistic, but that’s what happens!!!!

Next we enter the “Grand Dining Room”; my it’s busy tonight and firstly we are greeted by a chef standing in front of the largest turkey I think I have ever seen, a magnificent beast. We asked for a table for two tonight and sat in the raised centre section of said dining room where we had a good view of everything going on, the atmosphere was buzzing tonight and the staff were scurrying around keeping everyone happy. We both knew we were going for the traditional Christmas Turkey followed by Christmas pudding but what to start with, oh dear, decisions-decisions. We settled, Christine went for a lobster dish followed by Foi Gras I on the other hand had a terrine of Foi Gras followed by a salad, (I am on a diet you know!!!) then the Turkey. All the food was excellent and though they were catering for lots of people ordering Turkey, there was plenty, very hot, not dried out and very tasty; the best I have ever had outside home.

Fully replete we had some time to kill before the show so went back to our cabin, had a hand of crib before going to the show. Now we are not of one accord, Christine thoroughly enjoyed the show, consisting of various singers, a string quartet, the comedian reading a poem and a number of the band doing solo performances. This reminded my of days gone by, before TV and people in their homes amused themselves doing “turns”; as I said Christine enjoyed it but it was not my cup of tea, especially on Christmas night. As I mentioned earlier, in my humble opinion the shows are what lets this wonderful cruise down.

The thought of going up to “Horizon’s” to dance the night away was too much, we headed for our cabin and to bed, we were both totally knackered; I fear we are starting to get a little old now.

We are at sea for the next three days, one of which we traverse the Panama Isthmus via the Panama canal.

This entry was posted in Costa Rica Punterarenas. Bookmark the permalink.