We sailed into Puerto Vallarta 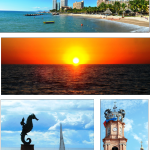 Wonderful sunset as we left port

after two relaxing days at sea. Whilst we were enjoying Breakfast another cruise ship, the Ruby Princess, followed us in, but as we had arrived first, space was at a premium and she had very little room in which to spin around 360 degrees before berthing. Her stern passed our dining room window where we could virtually see the “whites of their eyes”; another coat of paint and that would have been it!!!!!

Archaeologists have found evidence that this area was inhabited around 580BC but documented history of Puerto Vallarta starts with the Spanish invading in the early 16th centaury and, in 1524 a major battle took place, which pretty well saw off the local Indians and left the Spanish in full control. From that moment in time a town grew, firstly it was a safe haven due in part to its deep-water bay and surrounding mountains. During the 17th and 18th Centaury when there was inclement weather this area was used as a safe haven for the coastal seafarers, it also became a base for pirates.

Today Puerto Vallarta is a throbbing tourist town and stopover 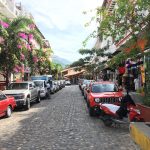 One of the side streets.

port for the cruise ships. But talking to one guy, he was telling us there are many more Mexicans arriving now, mainly I suppose to the proximity of Mexico’s second largest city, Guadalajara, being fairly close by.

Having enjoyed yet another excellent leisurely breakfast we sorted ourselves and headed off to town. Naturally, waiting to accost us whilst heading out of the port were taxi Drivers, dodgy tour operators and most probably genuine ones, guides etc., etc., etc., but not for us, after all we had decided not to avail ourselves with the ship’s tours. We were going “local style” and waited at the bus stop as the centre was around 4 miles away, far too far to walk and it was getting hotter by the minute. The bus arrived, well, what could I say: 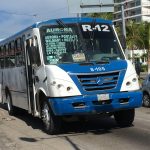 we have been in some “interesting” public transport in the past but I think this takes the cherry. The buses don’t have numbers, it’s the way they are painted that tells passengers which route it is doing, and as an added aid, there is a piece of cardboard stuck on the front screen saying, in our case, “Centro”. I have to say they were normal size buses but minimal seating and as for soft furnishings, forget it. Standing was in fact the more comfortable way to travel. The roads are cobbled or not, and where not, there are large potholes. We think our driver found them all!!! Now picture this, a narrow street, two buses side by side, each trying to get in front of the other, it was as if they were starting a F1 Grand Prix and if that wasn’t enough, add in many cars, motorbikes, cycles and of course pedestrians; a 15 minute nail biting ride; all good and exciting stuff, got the adrenaline going.

Having had our teeth nearly shaken out, we arrived and yes first, all we needed were facilities. We went into a small hotel, sorted what had been shaken down! Enjoyed a coffee and a yes you’ve got it a Spanish brandy, fizzy water for Christine! And we were now ready for the off. We were told there was “a” flee market worth visiting though “this” turned out to be “those”, a number of buildings housing touristy tat/souvenirs, still we got our fridge magnet having bartered it down from 6 dollars to 3; I think there was another 1$ to get off but Christine had had enough so hence, $3 paid. 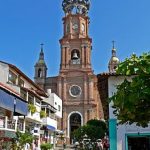 Next we went looking for the Cathedral that actually turned out to be a Church called “Church of our Our Lady of Guadalupe’ (well that’s in English). This church has been called one of the most enduring city’s landmarks. We found it, went inside but there was a service taking place so left. What we saw of the inside was rather plain, most un-like the R.C. churches we have seen in the past, still the church tower was rather impressive. 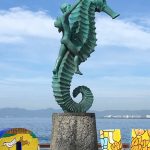 One of the many statues on the sea front

We then walked the length of the promenade, busy with tourists, restaurants, and shops selling Tequila and yes, 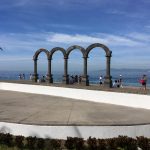 No idea what this statue represented, but we took a picture anyway!

more souvenir shops. Along the promenade were numerous bronze statutes 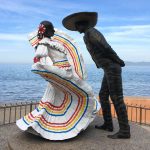 One of the bronze statues

depicting various sea myths. We were not too sure why they had these all along the promenade but no doubt they all added to the ambience of the place.

One of the many statues on the sea front

We decided there was little more to see so ventured back from the beech towards the town, even passing a McDonald’s on the way,  to find the bus back to the cruise terminal. Perhaps we should have had a taxi rather than punish ourselves again but hey, we’re tough so just got on with it. We arrived back at the bus stop we started from, put our teeth back in, re-arranged our bones then walked back onto the ship.

When we were walking out of the port earlier, numerous taxi drivers offered to take us to town; they started quoting us by the ship $20, by the time we reached the port gates it was down to around $12, we did both journeys for a total of $2 on public transport and we got to see the locals going about their daily life: no contest in our book.

Back on board we had a spot of lunch then into the Jacuzzi; unfortunately they didn’t have buttons to get the jets going and when we asked, were told if we wanted a full Jacuzzi, we had to go into the health spa!!! So, we went to the pool but unfortunately the pool hasn’t warmed up yet so gave it a miss and returned to our cabin.

We had booked a table at the “Tuscan” specialty steak restaurant but before that we went to the pool area as there was a local Mexican band on board and by heck they were very good.

We shared a table in the “Tuscan” but in reality this was un-necessary as the restaurant was only 20% full, still they were a nice couple from Oregon. We discussed the usual; Trump, Brexit, Food, cost of living, Teresa May, Jeremy Corbin etc., but we had a fun dinner and the food was great.

The show tonight wasn’t up to the standard we had come to expect, it was all mediocre singing by the resident show “boys and girls”, and unfortunately it lacked “pizzazz”

Back to our cabin as we are knackered after such a “tiring” day in the hot sun!!!!!!!!!!!!! Tomorrow we are visiting Manzanillo