Andrew had to jump ship here in Port Hawkesbury as he had a pressing business, so he said!!!!!!!!!!! (We wondered if he was avoiding the voyage to Bermuda) anyway Trevor and I delivered him to the Airport then went on to Halifax to stop over the Saturday night.  Halifax is a peculiar town; firstly it is a big university town and as Saturday night was also Halloween, the pubs/restaurants/clubs etc., 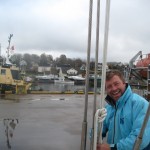 Jeff (Skipper) On Deck Next to the Quay at Port Hawkesbury

were heaving; a good time was had by all.  Sunday we received a shopping list from Jeff (our skipper) and to stop there, and on Monday visit the local chandler. Fine, we re-booked our hotel rooms and spent the day exploring Halifax.  There was a lot of very interesting and fascinating history associated with this town but the one outstanding fact is, Halifax only springs to life and becomes “alive” in times of war, at other times it goes back into a dormant mood. (For more details, try their web site).

We were certainly pleased to get going after carrying out some repairs.  Port Hawkesbury was what I would call a bit of a “dead & alive” hole, very friendly people but as it is a long way from nowhere, more dead that anything, still there was “Dooley’s” , this seemed to 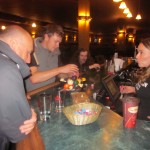 be the centre of the universe apart from “Papas” where they did very passable steaks.  Dooley’s had about 12/15 pool tables but we never saw more than a few used at any one time: In fact there was never much action at any time other than when we arrived; we were seen as new “meat” for the locals.  Still Dooley’s served jugs of cold Canadian (very gassy) beer which seemed to go down well and free coffee, well I think it was coffee, they said it was!

After “Sandy” (the Hurricane) had moved west through New York and into the great lakes we set sail from Port Hawkesbury at last; south to Bermuda.  We had a 40 mile dash along the Causeway to the open sea.  The sun was shining, the sky was blue and we were all in our thermals, heavy waterproofs and wellington boots, wonderful! Everything was fine once we hit the open sea so we thought our luck was in as the forecast told us there was a squall shaping up though with a bit of luck we should miss it.  I staggered up on watch around 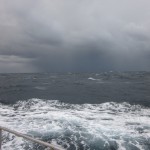 An Angry Sea with Rain Clouds

0300hrs and was “gob Smacked” at what I saw.  Seas up to 5 meters, rain pouring, winds around 30 knots and lots of water flowing over the bows and running the length of the boat; and we were hoping to miss this “squall”, ha, we hit it full blast and had to run through it.  To make things worse, as the boat, having been laid up on the hard for the past 5 years with no one to lavish TLC, just deteriorated.   The upshot was that all the deck hatches leaked, not drips, but bucketfuls, no one had a dry bed!!!  We couldn’t put up any sails as the rigging needed attention and the main mast was loose, so we just rolled and rolled like a barrel, extremely un-comfortable.

This squall seemed to roll into another squall then another one and of course we were suffering seas that were the final consequences of “Sandy”. The owner, who incidentally drew up the original design must have had tree trunks for arms as there was no auto helm and the rudder was direct drive (no power steering), so the whole journey 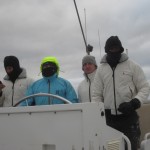 had to be manually helmed.  Unfortunately with my neck and shoulders I just didn’t have the strength to steer so spent all my watches giving moral support and, making the Skipper cups of tea.  Fortunately we had a skipper and two very fit, and very willing crew who had the strength to cope; then there was Trevor who came for the ride and experience of ocean sailing, I hope he wasn’t too put off!

Finally, motoring out of the night, 6 days later, we spotted the Bermuda light house, then the passage lights that guide you round the masses of coral and into St Georges, we had arrived in Bermuda, fantastic. 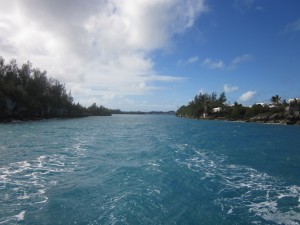 When the paper work and immigration formalities were completed we all had our priorities. I went for a shower then Breakfast with Trevor, what the rest did I am not too sure but we all met in the White Horse (pub) around lunch time and enjoyed a long afternoon chilling out in the sun; shorts and flip flops at last!!!

Andrew was due to fly in a couple of days later but in the mean time Jeff organised a rigger to sort out the Mast and Stays etc., the crew went about sealing the hatches and we all cleaned up the boat. Ordered a tanker of fuel and another with water, well it is a very big and thirsty boat!!!

This entry was posted in Carinae IX. Bookmark the permalink.