Our arrival was on time but as we weren’t here for long we didn’t think there would be much to see so had a leisurely breakfast before boarding our tender. 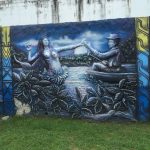 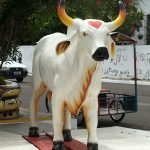 bulls; it is one of those places that’s only accessible along the Amazon by air or ship, and in our case by tender.   Parintins were first inhabited by a couple of Indian tribes who were discovered by a Portuguese fellow 1796 and the area was eventually “officially” recognised in 1880.

Travelling across from the ship to the pier we saw Pink Dolphins, unfortunately they are not like common dolphins, they don’t come up to play, they only surface for air; still we saw some. When we got off the tender the girl from the ship told us not to fall in as there were also Piranha fish and Alligators though I think she meant Cayman; similar but different. 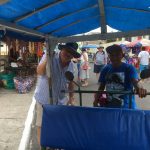 Our transport for the morning, no brakes, just two wooden wedges tied on by string to hold the cart in place whilst we got on.

There were excursions but again very expensive and they seemed 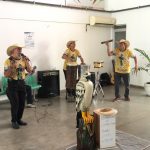 On arrival these players greeted us

to be “padded out” so we planned to do our own thing.   Being a fairly small town, population around 100,000, cut off other than ship or plane, there is little traffic, no public transport as far as we could see, other than pedal tuc tucs, similar to Nicaragua. They also had “Moto taxis” these 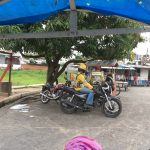 are official motorbike taxis; just hop on, they supply you with a helmet and off you go, well we didn’t, we decided a more leisurely pace was called for so jumped into 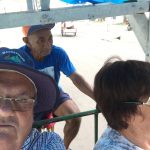 a pedal tuc tuc. In the port area they were asking for $20 for an hour’s trip around the town, outside we got one for $10 and he certainly took us around for longer than an hour, he took us to the few, but various sites. When we got in we worried about the pedal pusher, he looked very old and feeble and probably that’s why he was cheap; we had visions of him leaving us, or asking for 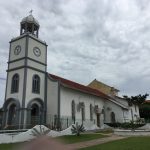 another $10 to take us back. But no, he took us on a round robin; we pedaled round what looked like an old church that was locked up, along various streets pointing things out along the way, though as he didn’t speak any English and our Portuguese is non existent, we didn’t always catch what he was saying.

He then took us to this rather large stadium, naturally being 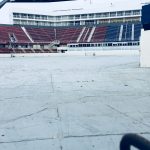 The stadium, where all the competitions are held

Brazil we assumed it would be a Football stadium, but no this was a purpose built and used for the big annual festival “Bio Bumba”. Bio Bumba is a very big and 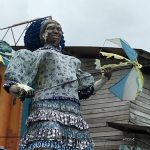 One of last year’s giant figurines, they were huge. One finger was about 12 inches! So [caption id="attachment_5435" align="alignright" width="150"] 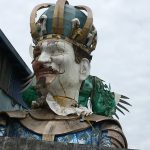 Figurines must have been at least 20ft high, they were amazing

imagine the sizes[/caption]colourful annual festival that takes place in late June, and it’s the second largest festival in Brazil after the Rio de Janeiro carnival. It’s a folklore about a precious bull, (that’s where Parintins gets its alternative name, City of the bulls). The interesting thing about this festival are the two opposing teams, each trying to outdo each other, rather like Manchester City and Manchester United, or Liverpool and Everton. The two teams, “Garantido” and “Caprichoso” are subjected to many rules; they compete against each other with floats, costumes, story telling, flamboyant dances etc., and they present themselves to the 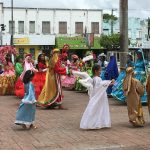 public in a specially constructed stadium called “Bumbodromo”. This stadium has a capacity of 35,000 and it is split into two sections, red and blue for the opposing supporters. According to our pedal tuc tuc driver, when the crowd gets going, the whole stadium shakes.   There is quite a story behind this festival and rather than bore you with it, those who may be interested can click on the this link:- www.boibumbafestival

The old boy eventually dropped us at the cruise terminal after taking us everywhere including an area where there was a lot of street food, fish in particular being bar-b-que’d. He tried to get me to try some but I wasn’t hungry!!!Tonight we had booked to go to “Tuscon” the Italian steak house on board, which was excellent and this was followed by our entertainment, Katerina Rossa who plays the violin un-believably well; it nearly talks to you and she received a standing ovation, well deserved.

After the show we had a corridor chat with a couple of English folk from Croydon and agreed we would meet up and walk into town at our next port of call, “Manaus” tomorrow