A lay in, that was good, although my phone alarm went off at 5.45am, as I had forgotten to turn it off, so lights on, fiddle for safe, then switch off, by that time I am awake!
I did manage to get back to sleep, so eventually woke up at 8.15am, so not too bad! We went to breakfast, just the café on top floor, as we want to stop eating so much, otherwise they will have to roll us off the ship! Well we were very disappointed that no ice was 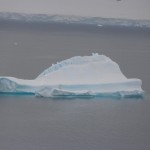 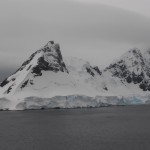 visible, we did spot an iceberg at 9.14am, and hoped that was not going to be the total experience!
We finally arrived at Schollaert channel! Then onto Paradise Bay, which was ‘awesome’ 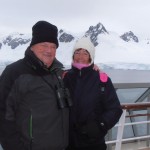 according to the American’s on board, every other word that they spoke was ‘awesome’ I have to agree with them, this bay is full of spectacular glaciers on the move. It is not uncommon to see and hear large chunks of ice crumbling from their coastal precipices into the frigid water. Contrary to the impression left by the frosty scene, the Islands are full with wildlife, including whales ( Minkes and humpbacks), seals (crabeater and elephant), three types of penguins (gentoo, aedile and chinstrap). Although we saw penguins and whales, I would not be able to recognise them, and trying to get photos of the whales was impossible with our little cameras, but we did see one whale flip it’s tail up, just like the famous 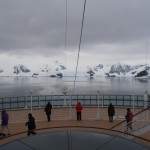 One time the penguins were swimming near the boat, it was like watching dolphins, but they were a lot smaller, they are amazing creatures, and so very cute!
In Paradise Island there are two naval bases ones for the argentines and the other for the Chileans on opposite sides of the bay, the sites are now inactive and primary used as a tourist stop.
Paradise Bay, can only be described as a beautiful scenic place, where it is so peaceful, and calm, we did say a few ‘wow’s’ but mainly just enjoyed the splendour of being there, absolutely Fantastic….. 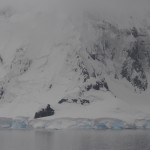 Our guide said that last time they were here, they were in strong winds, and it was -16 degrees, this time it was just -1degree, it is a dry cold, and we did not suffer at all.
We went to our favourite coffee bar, where they do excellent drinks, plus cakes, we deliberately missed lunch today, to enable us to enjoy, and they were very nice too, we also managed to get a seat by the window, so we continued to 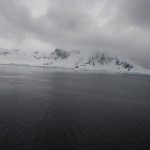 So peaceful and quiet!

watch the whales and the penguins playing around the boat.
Tonight at the theatre they had Laura Broad appearing, apparently she was from Britain has Talent, she made the semi-finals, we would have liked to see who one, as she was fantastic, she sang classical, jazz, and modern, and managed to entertain everyone for nearly an hour, she has an amazing voice.
After the show we went for dinner, this time in the US Restaurant, where you get the full works, back to the old fashioned service, with more staff than guests, you have to pay for this privilege but it is worth it, we both had dressed up, I was in my gold dress that we had made in Abu Dhabi, with a new cardigan that I had purchased on board, and Geoff wore his new suit, (he looked very smart) we had belly pork to start, then chateaubriand, which was cooked to perfection! followed by a strawberry crepe flambé, cooked in front of us! it was delicious! they offered us cheeses and biscuits but we were stuffed.
Later we went to the disco, but didn’t stay long, as we were tired again, all that food and drink I guess!