Up early yet again, 6.30pm, we were hoping to get a good seat at the bows for the trip through the canal, well that was a joke, all seats had been taken up, mainly by the Chinese, but not a problem, as we found chairs on the side, next to a lovely lady who was a BA air hostess and her husband was the chief security officer on the boat, so she was there for the ride, good for her.
The Panama Canal is the result of a saga of human ingenuity and courage that goes back to the early XV1 Century when the Spaniards arrived on the Isthmus. Since then, the idea of building a route that would join the Atlantic and Pacific Oceans was conceived.
The first firm effort to build an all-water route through Panama began with the French in 1880, but financial troubles and diseases made the initiative fail. After its independence in 1903, Panama negotiates an agreement with the United States for the construction of the Canal which the U.S. Would finish on August 15, 1914 and then managed the waterway until 1999.
At noon on December 31st 1999, Panama took over full operation, administration and maintenance of the Canal, in compliance with the Torrijos-Carter Treaties negotiated with the U.S. Tied States in 1977.
The Panama Canal serves as a maritime shortcut that saves time and costs in transporting all kinds of goods. Since its opening in 1914, more than one million ships from all over the world have transited the Canal. The historic millionth mark was reached on September 4, 2010 with the transit of the bulk carrier Fortune Plum.
The inter- oceanic waterway uses a system with two lanes that operates as water lift and raises the ships from sea level to the level of Gatun Lake. 26 meters above sea level, to allow the crossing through so the Continental Divide, and then lowers the ships to sea level on the other side of the Isthmus.
The water used to raise and lower the vessels in each set of locks is obtained from Gatun Lake by gravity and poured into the locks through a main culvert system that extends under the locks chambers from the sidewalks and the centre wall.
However it works, it was fascinating going through, we watched the first three locks, then we came to Gatun Lake, which took us about three hours to go across. Gatun lake was formed by damming several valleys to form the lake, it was very pretty, we went into the dinning room whilst we were doing this, and had a lovely lunch, by the time we had finished it was time to watch the last three locks, as we were going through Celebrity Infinity was also going through, so that was ironic, as we had spent our last cruise on her.
We spent the rest of the afternoon in the pool, watching the big screen, as it was showing us going through, what a lovely day. Last but not least we came to Bridge of Americas, it joins the north and South America, it looked as though we were going to touch the top, but there was a small clearance.
The evening was spent at the show, and we then had an early night, as we were both stiff, I think it is the result of going. on the 4 wheel drive, never mind it was fun.
This cruise is certainly better than the last, everything is that much better! 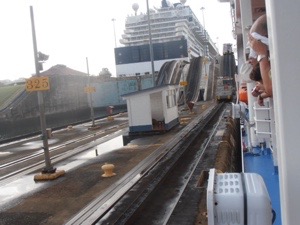 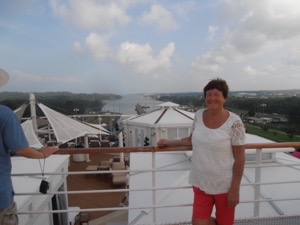 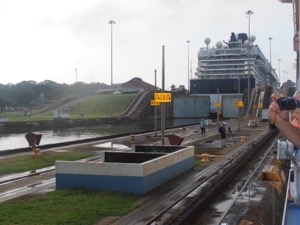 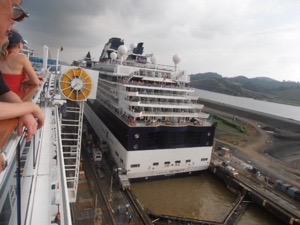 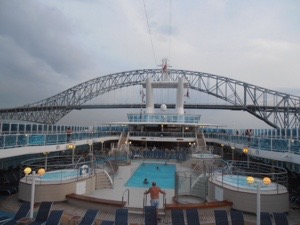