Oh dear, what a night, the shower/toilet door kept coming open, as I said, noisy and bumpy train with hard beds; we were glad when the tannoy went to tell us breakfast was ready: then to cap it all the toilet vacuum system packed up so had to get to another carriage: one can only laugh about it.  What a way to spend Christmas, ha ha!!! 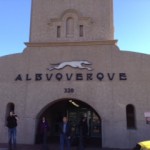 Breakfast was good and we sat with an old retired man who was on his own, so for his Christmas he took this train from LA to Albuquerque (New Mexico) where he was going to spend 5 hours then return.  During his 5 hours he was going to find a Mexican restaurant to enjoy empanadas.  When we arrived at Albuquerque we had a 1 hour wait whilst they re- fuelled the train etc., so had a wonder round. Everything closed and the place was dead so this poor old boy would have been very 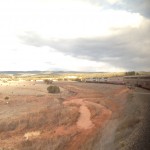 Not a lot to do on the train but read, play crib and look forward to the next meal.  One doesn’t appreciate how big this country is when normally you fly over it: mile after mile of similar terrain, quite boring really and I think we will re-think the travelling by train in the future, still one has to try these things.

Lunch today was again very nice, we chose a pork dish in bar-b-q source and we had the last of the Merlot, yes they had 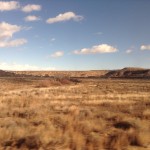 More of the Same

To cap it all the Wi Fi went down so we can’t communicate with the outside world either!!!!

Due to lack of sleep last night we had a siesta this afternoon, very welcome and it got us through to the evening.  Normally on Christmas Day one may have a nap due to a big lunch with wine and port etc, not us today, it was only due to lack of sleep. 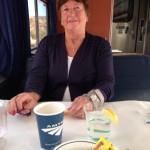 Christine enjoying a cup of tea

The sad thing is that historically travelling across countries in Pullman type sleeper trains had a certain elegance attached to it and mistakenly we thought there may still be a little magic left in this type of transport.  Not a bit of it, totally casual, plastic crockery, told where to sit and share, paper cups for coffee and tea, eat and get out attitude, never mind we crossed two time zones and didn’t get jet lagged!!!!! 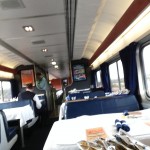 There was a change on the evening menu, roast chicken was on so we thought that was the nearest thing to turkey, so we ordered it only to be told later they had run out, oh dear another steak.

A few more games of crib and off to bed, let’s hope we sleep better tonight, one can but hope.