Today was interesting, I went down and spoke to the Iffley Lock-keeper, and he told me that Osney was still on Red Alert, I then met another couple of ladies, who had just arrived back from there in their narrowboat, and although they said the river was still high, people were going back and forth, so we decided to go for it, we could always come back if there was a problem.

We only had two miles to do, and the current was very strong, but we 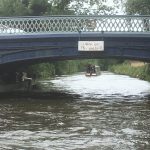 Young lads got through, now it’s our turn

made the lock, just in time to see two lads going in, so we chatted to them, and then the Lock-keeper came along and gave us an official warning saying we leave the lock at our own risk, as they were still on red alert, which we accepted, but he then said we would be fine, but remove the hose pipe from roof, and keep to the right to avoid the weir, before attempting 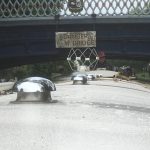 Very tight! Still we made it.

Osney bridge. We said to the young lads they could go first through the bridge, and they gave us the thumbs up, when they were through, it was very tight, and I understand why they were on red alert, still we made it just! I think the gap today seemed about 6 inches, maybe even less, between the bridge and boat.

We meandered along a very twisty part of 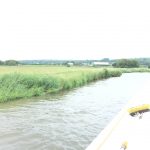 the Thames, the scenery is completely different, very open fields, not many buildings, or villages on the river. We followed the lads and joined them in two more locks, (these locks are no longer electronic, 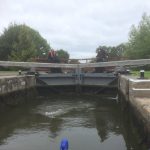 Back to Manuel locks

they are manual, )before we arrived at Eynsham, where we had to do some emptying of facilities, as it is a very chilly day, we decided to stop here for the night. 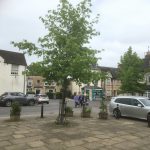 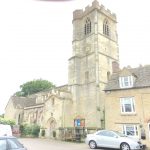 After lunch, we walked into Eynsham, very tiny village, with the old fashion butcher, hardware shop, and a small
Co-op, so we topped up with food, walked back, stopping for a pint on route.