Thursday 8th of November and we’re off again.  We start by flying to Gatwick then hiring a car before heading on to Jane’s; it’s Dave’s birthday so are ready to babysit.

Arrived at Pascals Paddocks ok, but not needed for babysitting duty this evening, but we are needed Friday morning as Jane and Dave are booked in to view a school for Mia.  Dave on the other hand has decided to celebrate his Birthday Friday, and has taken the day off and booked tickets for the circus that’s in Newmarket.

Following their visit to the school, we headed off to Northampton to meet our new accountant as Brian (old accountant) has decided to retire at long last.  I have been with him since 1982 and will now have to “train” a new one!!!!!!!!!  We followed this meeting with a quick visit 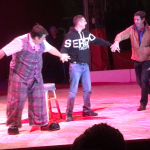 to our solicitor before heading over to Newmarket, arriving at the circus entrance with 5 minutes to spare before the show started.  Our party of 6 included Dave’s mother, Newmarket being her home town.  The circus, well perhaps the best I can say about it was “interesting”.  Of course circuses aren’t what they used to be, no big cats, no elephants or horses, in fact no 4 legged animals to be seen, so what’s left? Well there were Acrobats, jugglers, other acrobatic performers and oh yes, 1 solitary clown.  The highlight of the evening was when this clown selected 3 members from the audience, one being Dave who were given certain tasks to do.  Unfortunately the task given to Dave 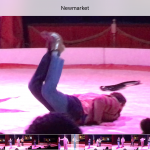 included laying on the ground and move along like a seal, well, Dave being fit and agile had no problem which gave the “so-called clown” something of a problem; he had never had anybody do this and then to add a little spice, Dave did a backflip.  By this point the clown had lost it and quickly moved onto the next chap he had selected, he was more compliant, he played along to his game!!!!

We managed to stay to the end at which point, having 2 cars, Christine and I shot off to look for a pub and have a meal.

About 10 miles south of Newmarket we pulled off the A14 at a signpost pointing to some obscure village called Great Wilbraham, and the only pub, the Carpenters Arms, fortunately had a restaurant not to mention the local microbrewery ales available.   So far so good and rather than eat in Solitary in the restaurant, we ate in the bar where there was a wood burner roaring away and some atmosphere; we even got chatting to some locals.  We both agreed we had struck gold, the food was excellent, the ales extraordinarily good, service was spot on and we didn’t need to take out a mortgage; just!!!  We completed our unexpected evening playing bar billiards; not played that game for years.

Our journey back to Brentwood was miserable, it rained cats and dogs, still we got back to find everybody had gone to bed.

Next morning back to Gatwick to return our hire car and book into the hotel for the night, flying out tomorrow.  Jane and Mia arrived around 1900hrs. 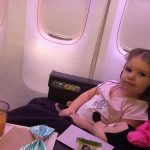 in, well nearly.  Jane enquired about upgrades to Premium, yes was the answer, there were a few spaces but we had to pay the extra.   After much discussion and a ‘phone call to Dave, we did it.  What a good decision this was, as Jane and Mia had the two front seats just behind the bulkhead with sufficient private floor space for Mia to play and amuse herself on this 9-hour flight.   Arriving in Orlando was a little fraught as the airport is being re-furnished, especially immigration.  Here again, being premium we were off the plane before everybody else and into the immigration queue and therefore out within about 45-minutes.  To add to the issues, at the time we landed there was a BA flight, (another Jumbo) and a further plane from Manchester, in all about 1100 passengers.   We were warned about these flights and it was suggested we ran, which we did.  Some of the stragglers were 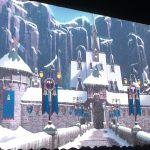 We eventually arrived at our villa totally exhausted, knackered and couldn’t wait to hit the sack, but I must say 3year old Mia took it all in her stride. 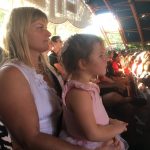 Jane and Mia enjoying the show

Naturally we all woke in the wee hours of the morning and couldn’t get back to sleep so had a rather early breakfast before heading out to our first attraction;Walt Disney’s Hollywood Studios.  What we didn’t 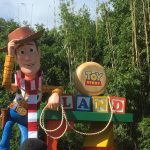 know was that this Monday is a bank holiday, Veterans Day we believe, and the Park was heaving.  The queues on all the rides were long but for the best rides, people were queueing up to one and a half hours.   There is a system of fast track passes available but to get these fast track passes for the god rides, one needs to get onto their website 30 days before the day of 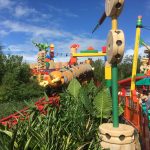 Couldn’t get on this 210 minute wait!

the visit.  The fast track passes available on the day are naturally for the less exciting rides. Still we did a full day, much queueing and not too many rides achieved, still Mia enjoyed herself.  I’d like to say that’s why we are here but I suspect the truth is we are here 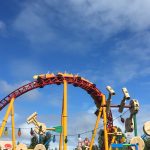 During the day we ate the usual rubbish, donuts, burgers and chips, Cinnamon buns 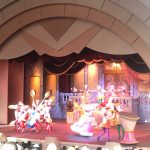 Beauty and the beast

etc., etc., but tomorrow we will be organised.  We stopped off at Publix (supermarket chain) and bought individual salads to improve our diet!   We were back home around 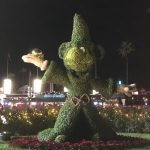