The dogs were up early again, wanting a walk, so I took them down to the riverbank, they loved it down there, and had a good run around, we will go back later for a swim.

We had some breakfast, and have decided to go to Orange today, it is 13 miles away, the weather is not quite so warm today, which is good, yesterday it was in the high thirties.

We took the dogs for another walk, this time Bella and Sooty went in the water, Sooty chasing a stick, Bella just going around in circles! She is mad that dog. Back to Rosie, and we were off to Orange, it was a lovely quiet road we took, and we soon arrived parked our bikes, and now ready to explore. 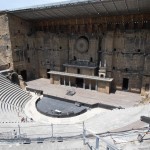 Went to get camera out, must have left it on the table, so we will have to go back again. Getting old is driving me mad!! We decided not to go to the theatre, but instead look for a new camera for me, as mine is broken, will send it back later.

We found a camera, and purchased a new Olympus one, nothing too posh, but it has everything on it, so it will do for me.  Then when the guy was looking for the battery he could not find it, so we said we would come back later, good excuse to have another meal out, which was lovely, the whole meal with pudding only came to 24 Euros, and that included drinks, cannot be bad.

It is market day here, which is a shame we did not have a camera, as the stalls were packed in, loads of people around, it was fascinating just watching whilst we ate our lunch, especially when they were packing up, and big vans were trying to get down 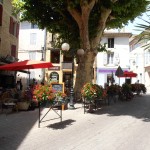 tiny streets to load up, and go home.

Back to the shop, they had found the battery, it was hiding in the box, so I now have a new camera, will be back taking photos tomorrow.

Home to find some really grumpy French man, having a go at us, for having the generator running, I wanted a cuppa, plus he complained we about us leaving the dogs, well they were so tired they didn’t want to go anywhere, Geoff and he were going at each other, and neither could understand what they were saying!! 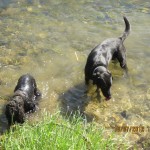 We took our two hard done by dogs to the river again, where Sooty has a new trick, he was diving down under the water to pick up stones, carry them to the shore, and go back for another one, it was really funny to watch him put his head under the water, and eventually surface with a stone in his mouth!  Bella just kept on going around in circles, they both loved it, Geoff and I paddled, but there were children playing on the weir, and using it as a slide, 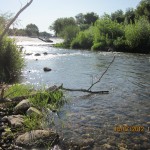 what a lovely place this is.

On way back we called into the wine cellar, this time to try the white, but none were what I called really nice, and they were a lot dearer than the red had been.