On The Move Again, a big day today so up early, well 0800hrs! As today we make our way to the Union train station in LA but this time with all our luggage. After a quick breakfast of cinnamon buns and coffee in our room, we check out of the Queen Mary and walk across the car park to collect the free bus shuttle to the light train station, really a tram! The bus ride was fine though trying to keep 4 cases, all on 4 castors was interesting, especially when we went round corners. We re-charged our transport cards with a day’s pass and boarded the tram. Fortunately we were first on so the tram was empty, we had time to turn the cases onto their sides, this ensured they wouldn’t float around. Being the first stop on the line was good as we had plenty of time to sort things out. After an 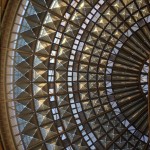 A Sections n of the Roof inside Under on Station

uneventful 1 hour ride we arrived at the other end of the line, we then changed onto another train, this time only 3 stops. We were told a taxi from Long Beach to Union Station would cost around $85-$90, add in a tip, no change from $100; our public transport totalled $14, what a result. Maybe we should use public transport more often!!! Arrived safely and unflustered at the Amtrak “Metropolitan” passenger lounge, rather like the Business Lounges at an Airport but without alcohol.  We checked in our cases, had a coffee then headed back to the metro, after all we did have day passes.  On the  way to th Metro we came accross a shoe shine boy so naturally I had my shoes cleaned! 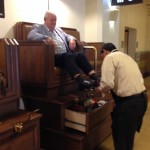 Having my shoes cleaned

Then onto the red Metro line and headed out to Universal City and Studios In Hollywood. 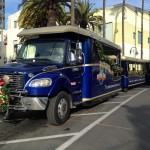 Arrived, left the station then got onto a free shuttle for the ride up the hill to the Studios, naturally we didn’t have time to do a studio tour but alongside they have Universal City, a themed shopping centre.  We wandered about window shopping until we came across the Cinnabon Shop.  After much soul searching we dashed in and treated ourselves to a couple, well it has to be done, they are lovely. 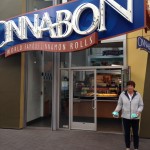 Back down the hill onto the shuttle, back to the Metro and then back into the Amtrak lounge and had a cup of coffee and waited.

The call came to say the train was waiting,  so we all piled into large golf carts and were taken to the platform only to find the train wasn’t actually there but we were dumped on the cold open platform anyway!! 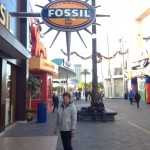 Christine Under our Sign (We aare e known as the fossils by some of my family!)

About 15 minutes later the train arrived but our coach didnt stop where the “red cap” said it would, we gathered our bags and walked to our carriage door only to be told by our stewardess she wasn’t ready for us yet and that we had to wait outside on this draughty platform.

10 minutes later we boarded but when we saw our cabin we nearly died. It had two arm chairs facing each other, there was a bit to go in the middle to make a bed and the other bed dropped down from the roof to make to bunks. That was it, no space to store our bags, to undress, no facilities and very claustrophobic.  We wandered about and found bigger cabins with a shower/toilet cubical 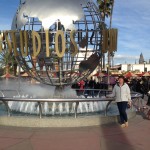 Outside the Universal Entrance

as well so that was it, we were on a mission to get upgraded.

we asked our stewardess, but she was no help, Christine then found another carriage stewardess who was much more helpful and advised us to see the train conductor/guard.  We found him and asked, I was hoping to just drop a wedge but no, he was a jobs worth and had to ring HQ for permission and find out the upgrade cost.  He came back and said yes we had 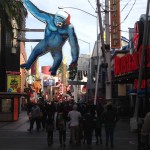 one of the large cabins and the upgrade fee was , wait for it, $577, wow! We had no choice we couldn’t manage in that little apology for a sleeper compartment and queening the price to him would have been a waste of time, we will try and sort it out when we get to Chicago.

Anyway, Christmas Eve so down to the restaurant car where we enjoyed a very nice tender steak cooked to perfection, well for us anyway, very rare and washed down with several 1/4 bottles of rather nice Merlot.

Back to our new compartment and though very much bigger, when the beds were down, floor space was at a premium and you had to wedge yourself into the shower/toilet compartment if you wanted to shut the door:  we thought the shower compartment on the Princess Cruise Ship was small, ha ha, that was wonderful compared to this.

Christine went up and I stayed down and hoped we would sleep…………………….. 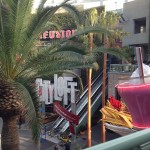