On our own again

Back to the two of us again; Jane arrived back in Jersey OK, with both flights on time so that was good whilst we had a quiet morning with Christine still trying to sort out my ESTA.  The US web site where one applies for theses things is far from user friendly so we’re planning to go the the US consular office here in Antigua for help.  Judging by the experience we’ve had over the years with US immigration, I don’t hold 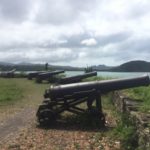 Overlooking the entrance to Harbour

out too much hope but let’s stay positive and optimistic.

After an early lunch we headed to the beach for our daily exercise but en route decided to re-visit the remains of Fort James.  Though we had done this earlier with Jane, we hadn’t really had a good poke about, so today was the day.

Fort James is high up on the headland at the entrance to the harbour of St Johns. The fort was built to guard the entrance and is one of the many forts built by the British in the 18th 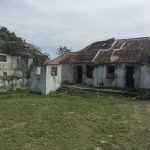 century prompted by the fear of a French invasion.  All that remains today is the shell of one of the powder rooms, a number of cannons and the foundation of the fort’s walls. The main attraction up here now is the excellent view of the surrounding harbour.  I have to say those “old naval guys” knew a thing or two about defences, it was a magnificent and most commanding view of the entrance to St John and I bet if all those cannons fired up in anger, no ship would escape.

The fort is named after King James II when work started on it in 1706, and most of the buildings were constructed in 1739.   In 1773, the fort was armed with 36 guns, and had a barracks which accommodated 75 men.  There are a number of cannons still pointing out to sea but it 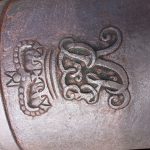 appears some or all must have been replaced, as one we noted had a an 1805 date stamp cast into the barrel.

We revisited the fort james beach, again, due to its close proximity to us as well as being a superb stretch of sand however, there was quite a strong off shore breeze and the waves were kicking up a bit; still we managed our daily excise but missed Jane’s “water exit”

Today we visited the US consular and strangely it is very convenient as it only around the corner to our cottage, though the entrance is right in the middle of the road works.  As I have mastered the “local technique” of driving, getting into the embassy, ignoring red lights didn’t pose too much of problem, as they probably say round here, “just do it”, and we did!

Getting into “Fort Knox” was ok but before being scanned for god-knows-what, we saw how many were waiting and worse than that, the “one” consular wasn’t even there, but they were expecting him/her sometime; another day we said and went shopping instead.  We didn’t have our daily swim but had a quiet night as we are heading to Barbuda tomorrow; fingers crossed in case it gets cancelled again, after all we’ve had our trip to Montserrat cancelled due to the ferry going into dry dock and last weeks Barbuda was cancelled due to high seas, hence our apprehension!!!