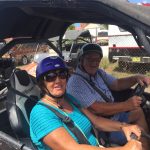 This morning we headed to Fort James Beach but en-route stopped by the old fort for Sarah and Lee to admire the view from the top, high above the harbour.   The sea today, though still nice and warm was quite rough for the Caribbean, presumably there was some bad weather about in a “far-off” place, anyway it was a challenge entering and leaving the sea.  We didn’t stay long as we had an appointment at 1330hrs at the “Salty Dog” office as we had booked an “off-road” excursion so headed home for a quick snack before arriving at the “Salty Dog” offices to “pay-up” and have the debrief, the usual health and safety warnings etc., followed by signing away any rights we “may” have with the disclaimer!!! 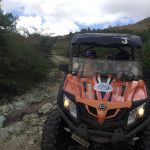 We mounted our off-road “chariots”, Japanese built, 500cc 4 wheel drive CFMoto Z force vehicles, and we were off. We headed out of the port area of St Johns, through the back streets, many of which we hadn’t been through before, before hitting the open road heading for the big mountain in the rain forest. Our party consisted of the Salty Dog lead driver “Donald”, Lee and Sarah in the first car, with Christine and I following. Behind us was the salty Dog “rear gunner”, there to ensure no one got left behind; fat chance of that with Lee and I driving!!!! Speeding along the open road, achieving 62-KPH at one stage, we soon reached the point of no return, i.e. onto the dirt tracks. Fortunately we were all secured with full harness belts, crash hats and a “big” grab handle for the passenger and naturally roll bars built in!!! I don’t know how Sarah felt sitting alongside Lee, but I know Christine was 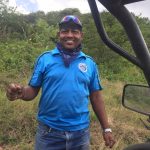 apprehensive; it’s her bones you know!!!   It didn’t help that en-route we had to stop to get Christine’s full harness straps tightened; the last person must have been rather large!!!!

We had been told to follow Donald’s wheel tracks on the basis he knew the best way through the dips, bumps, mud baths, rocks and oh yes, the “supposed” track, and this we did at breath-neck speed, staying as close as possible in line astern.   All was well until we met a “car” coming the other way; how a car managed to be there we’ll never 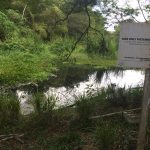 know, but he was and we had to make room. Fortunately there was “spare” track off to the side, so we squeezed into that to let him by.   Due to this car “attacking us” we finished in a different order, I was in front of Lee and being a little “off-the-wall” stuck right up Donald’s backside and pushed him as hard as I could.   I expected, at the next stop to be told to calm down but no, he responded and the two of us were 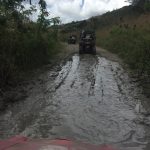 Lots of mud and plenty of water

off, and on occasions left the other two behind, Poor Christine, though she was well strapped in the jolts must have been very painful as there was no quarter given, I wasn’t going to let Donald have the satisfaction of getting away.

We had four pre-arranged stops. The first was where the original reservoir “Body Pond” was built many years ago, but today the dam is broken and there is minimal water and trees etc., growing out of it however there is still an outlet pipe for water to be used at our next stop. Here Donald pointed to a community of “Rastafarians”, apparently there are around 100 of them in total, living a self-contained and self-sufficient life in an enclosure that also has its own school etc., and in addition, they 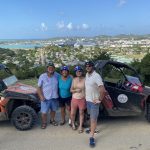 cultivate all the land around the enclosure for their food. The Antiguan Government has given them a one hundred year lease on the land, and if they still occupy it at the end, they have the right to buy it.

Our next stop, more of a comfort break and we were given some pineapple chunks to eat. We then set off on our last off-roading section prior to heading back to St Johns and now we really gave it some “welly,” no holds barred knowing it was all coming to the end.

Our last stop was high above St Johns, the “official” picture spot looking down onto the 3-Cruise ships moored in the harbour with the surrounding buildings.

We tootled down some really “hairy” hills, in very low gear as our last “hurrah” before returning the buggies to the Salty Dog pound. After all 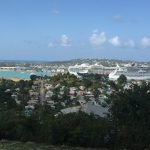 the good byes and the discretionary tip, we headed to C & C for a bottle of wine, well two to be precise, with all four of us sporting grins from ear-to-ear, we had all had a fabulous time though it did go very quickly, we think they cater for slow drivers, and we weren’t, we went too fast!!!!!!

Leaving C & C for a much needed shower before heading out again, this time to a recommended restaurant that “advertises” and as its name suggests, they only do “Fish & Rum”, though we think they can do chicken if needed.   After a difficult drive to find this place in the back streets of St Johns, including a 20-point turn, we arrived, only to find it heaving with no spare tables. It hadn’t occurred to us to book a table for opening time, we hadn’t been told just how popular this place was!!   Oh well, after a short discussion we headed back to the old faithful place, yes C & C.   Christine and I will try again another time and report back to Lee and Sarah,

Back at the ranch we headed straight to bed though Lee did download the videos he took some are embedded here.

This video is very big but at least you can get some idea what my bones suffered. Christine 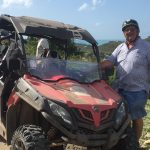 Geoff’s face says it all!