Early Monday morning the family went about their businesses and left us to lock up when we were ready to leave.  Today was another sunny but cold day as we headed to see our accountant to complete our UK tax returns.  This was followed by Christine’s spending spree at Dunelm’s buying curtains etc., by which time a spot of lunch was called for before we headed north and low and behold there was a KFC, couldn’t be better.   When in UK this is the only fast food chain we will visit, and then infrequently but it has to be done as it’s nice chicken.

After a pleasant lunch we hit the M1 heading up to Derbyshire, and after a stop halfway for a cuppa, we arrived late afternoon.   It’s always good to come to the Peak District but it does highlight one of the main reasons we moved to Spain; cold, wind and rain! 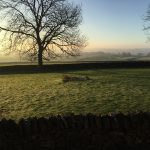 Anyway we had a lovely evening catching up with news etc., and Martin and I chewed the cud with half a bottle of very nice malt from Orkney.

Tuesday was rather a domestic day though we did get into Bakewell and visit the “Wee Dram”, this time for gin rather than whisky and was greeted like a long lost friend; I can’t think why!!!

Tonight we were in the Hayloft, one of the holiday cottages Martin and Marian let out but fortunately for us it was empty, so in we went!  After dinner we all decided an early night may be the order of the day, not only because of the previous late night but tomorrow evening we have a whisky tasting evening and anything can happen then!

Today, Wednesday, we were hoping to take Marian out for lunch but unfortunately she was waiting for a parcel containing a large suspension part for Martin’s car which was off the road and had to be signed for.  So after much debate Christine and I reluctantly left Marian at home and headed to Buxton.   I had been experiencing problems with my on-line accounts due to additional levels of security which prevented me getting on-line, so my priorities today were to visit Nationwide and Barclays to resolve the issues, hence Buxton as they both had branches there. Not only did we complete our mission we enjoyed a fine sandwich in the “Buxton Tap Room” washed down with an excellent pint of local beer.

Returning to Rockford House, the part still hadn’t arrived so Marian could have joined us for lunch, anyway it eventually arrived late afternoon, Martin will be pleased.   Tonight was the night, Adrian from the Wee Dram had organised a whisky tasting at the “Flying Childers” in Stanton-in-Peak, fortunately Marian was driving!    We tasted 6 very good single malts accompanied by factual, yet entertaining dialogue given by Adrian, supported by his wife, Allison.   meanwhile ChristIne and Marian entertained themselves, no doubt getting right up to date with all the gossip, sitting in another bar ?.  Six Whiskies and a 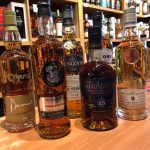 couple of pints later and we were all back together before Marian drove us home.

Thursday, 5th December and it was Christine’s birthday but we couldn’t linger as we had to be clear of the Hayloft by 0900hrs as the cleaner arrived prior to the next paying clients.

After breakfast we left and headed to Chester for Christine’s birthday treat.  Apart from “requesting” that we stay at the Chester “Crowne Plaza”, she also wanted to meet up with our friends Leisha and David for a meal.  My “instructions” were clear but I added an extra twist, I also invited Martin and Marian together with Micky and Ricky to join the four of us.  Everybody was under strict instructions to avoid saying anything that would give Christine cause to be suspicious.   Obviously I would have struggled to complete this task from Spain so Leisha very kindly helped me.  Following a previous visit, “The Architect”, a very good pub restaurant in Chester was the chosen venue whereupon Leisha went in and organised a table for eight, and in a configuration we wanted, also during this visit we also got permission to bring our own cake in.  OK Leisha, please go and find a good baker to get a fruitcake with royal icing made. This was all going on in the background but being December we had no choice but to have the “Festive” menu and everything had to be pre-ordered.  This could have posed a problem with Christine buzzing in and out of our office as I was trying to collate everybody’s requirements into one cohesive order on my computer: it went off without a hitch, so far so good.   Leisha completed her task and sourced a cake exactly as I wanted. The wine list then arrived at a point when Christine was looking over my shoulder, oops!   How I passed this off without her “smelling a rat”, I know not;   Eventually all plans 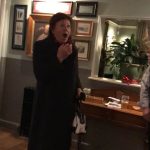 Yes I was surprised!

were agreed and everything was in place for tonight.

Where the surprise could have been blown out was during our stay with Martin and Marian, I have no doubt any slip would have been pounced upon by Christine and probably the most vulnerable time was when we were saying our goodbyes, and looking forward to our next meeting in a week or two’s time.  Additionally at the same time we were exchanging e mails with Micky and Ricky trying to arrange a meeting with them, all very dangerous.

We checked into the hotel mid afternoon and rested up for the evening, Christine understanding an evening with Leisha and David will be boisterous, little did she know!!!!!!!!!!!!!!!!!

Every time ChristIne asked what time we were meeting I said 1915hrs, I think she thought this was an odd time so I gave some sort of cock-and-bull story, the others though had 1900hrs as their deadline.   We were ready, but too early to leave so I had to think fast, I decided a last minute urgent visit to the loo was called for, this did it and we arrived spot-on 1915hrs only to see Leisha and David and say our hellos. I was a little worried at this point but david said there was a drink on the 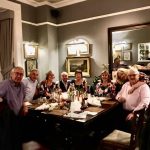 Thank you everyone I had a brilliant time

table in the small bar round the corner and pushed Christine forward whereupon the surprise was sprung.  She was gobsmacked, couldn’t believe her eyes seeing the other four waiting round the corner; I think she was pleased. 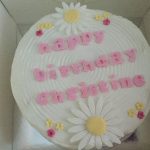 champagne; well done and thank you Leisha.   After an very jolly evening with lots of laughter we went on our separate ways, obviously we all had different hotels. 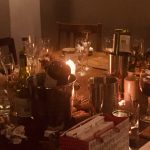 Good night was had by all

airport complex. We were hoping to see the “Beluga”, An Airbus enlarged to carry the Airbus wings to Toulouse for completion of new aircraft, but we didn’t, shame.  The weather was atrocious so a little shopping in Cheshire Oaks and a visit to the agents who look after my rentals was the limit of our activities.  Fortunately our breakfast was so big a cuppa and a piece of birthday cake was all that was required.

Saturday we headed to Whitby but first, Christine was adamant she hadn’t been to the Anderton  boat lift and was insistent we went there. 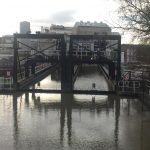 I knew we had been there but I wasn’t 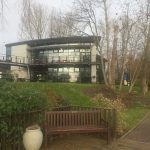 going to win this discussion, so off we went. She as hoping to go for a ride but when we got there they were only doing a pre-booked children’s Xmas cruise but, as the lift was out of action it was only a trip along the river Weaver, oh dear what a 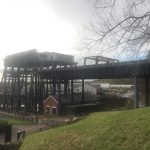 disappointment for her.  We had a wander around, a cup of coffee and then back on the road.   I had already decided I didn’t want to go on the M62, I 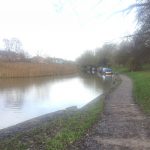 Should we have sold the boat!

wanted to go over the Pennines via Skipton which I knew would take longer, but had we missed out the boat lift it wouldn’t have seemed so far and we would have arrived earlier!!!

Our booking was for the White House, a hotel on the cliff above Whitby and when we arrived, in the dark, we were pleasantly surprised at what we saw.