We were up fairly early, as we needed to get going; firstly we had to “pop” into Morrison’s for a few essentials such as wine and gin!! Then we had to visit the Northampton Marina to get our permit to get onto the Nene.  The Grand Union Canal, Northampton Branch stops just after the Towcester Road Bridge at which point when you leave the lock you are on the River Nene. 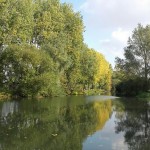 We moored opposite my old apartment:  Morrison’s is about 1 minute from where we were moored so managed to get in, complete our shopping and get out and on our way again, very quickly.  Our next stop was Northampton Marina, rather than drive the boat in we moored and I walked across, well that in itself was a challenge as the council seem to be building a bridge over the river so I had to pick my way through this building site before I could get to the walkway across the river and into the Marina.

Once in the office, silly me thinking this formality would only take a few seconds was dumbfounded by the forms I had to fill in.  It was a 5-page questionnaire, about me, the boat owners and the boat itself,: several questions of which I had no idea of the answers, still eventually it was “sort of completed” and after paying my money for a 7 day permit and an extra £10 for a lock key I was on my way.  Incidentally, this form has to be completed if one wants a 1-day permit or a 1-year permit; it’s a government department, which says it all.

The total time taken meant that our early start wasn’t early at all, 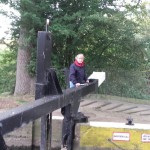 still we were on our way by mid morning and immediately into the first Nene River Lock, straight forward with Christine and her Sister Pat, working the lock gates.  The next 2 or 3 locks were interesting; the paddles were like nothing we had seen before, quite confusing, as it wasn’t obvious if they were open or closed, still the girls sorted them out but the other issue was these paddles needed 100 turns each to open them and another 100 turns to close them, very tiring!

Once we had completed these 3 or 4 locks the next ones were what they call “guillotine” locks.  Heading downstream as we were, to enter the 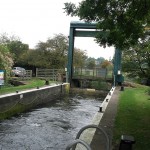 locks we had the usual 2 manual gates with their paddles to open and close but at the other end there was this giant electric/hydraulic metal guillotine lock gate, which seemed to take ages to lower (to fill the lock with water before we entered) then rise to let us out.  We had to leave these gates in the open position so though they held us up being so slow, when we return later in the week we know we can just drive straight into the locks and without Pat, this 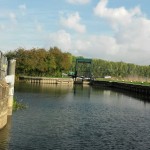 The river Nene at times is very wide, yet in other parts it is a narrow winding canal with overhanging trees and reeds stretching into the main stream; apparently this is a little used river, possibly because it empties out into the Wash and narrow boats wouldn’t be too good in the “wash” therefore have to retrace their steps.

Along the way, Pat gave Christine a nature lesson, picking out the various birds etc.  We also spotted a number of sheep in the river; presumably they must have slipped whilst trying for that very tasty bit of grass; very sad as they were just left where they drowned

We eventually arrived at our destination, Wellingborough tired and hungry.  Fortunately we had no trouble finding a mooring next to Victoria Park, very nice but opposite Whitworth’s Factory and their neighbours, a disused factory!!! Still we pulled the curtains and shut them out.  Christine made a very tasty Spaghetti Bolognese; we enjoyed a bottle of wine then sat down to play cribbage, as again, we couldn’t get TV.  Being tired, we all had an early night and tomorrow we are staying put as we have Martin, Marian and Russell meeting us for lunch.