We were let “off the hook” this morning as we only had a short boat trip therefore the Beagle’s engines didn’t fire up ‘till 0545hrs, much better. The strange thing was most of us woke up around 0100hrs as this is the normal start up time!  Unfortunately this morning is very overcast and those who got up early to watch dawn breaking were disappointed, still I am sure it won’t rain.

0700hrs up for breakfast again, but this morning seemed a little dull as we missed the affable Larry and Pam; they left us yesterday evening; still another excellent breakfast with a good plate of fresh fruit, omelettes, spicy ham and of course the usual cheese and bread/toast and jam. 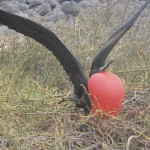 At the appointed hour, 0800, we were booted, fed, watered and waiting as instructed for our dingy trip to the island of North Seymor, a dry landing though as we approached the landing zone which was amongst the rocks, it looked far from dry!!! Still we all disembarked and stayed reasonable dry as we clambered 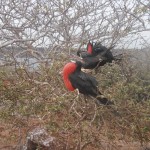 across the rocks and started our trek. Here we enjoyed the beauty of the spectacular male frigate birds with their red puffed up chests, trying to seduce the female frigate birds into their nests for a little “hanky-panky” and hopefully produce their one egg every two years.  Because of the Frigate bird design” they are very lacking until fully grown so the chicks are about two years old before they can fend for themselves. Additionally and to add to the confusion, there are “great Frigate Birds” and “Magnificent Frigate Birds”, here Duncan went to great lengths to explain the differences though it all sounded too complicated for most of us! 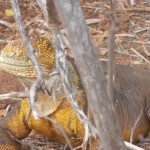 Wandering around we had the usual sea   lions near the sea and lying across the rocks, we saw the mandatory blue footed Boobys, and the local sub species of the Iguana, the males here on North Seymor are the largest we have seen so far.  This is a 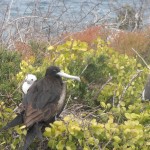 After 2 hours, when the circumnavigation was complete, we were picked up by the dingy, again we crossed the rocks expecting to get very wet, but no, we managed to board and stay fairly dry.  10 minutes later we were aboard the Beagle where there were fresh “Passion Fruit” drinks and Chocolate 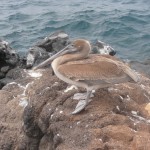 Chip Cookies waiting for us.  Duncan told us we had 15 minutes to get ready for snorkelling, well most of us are so “knackered” only 4 went out, and we all stayed on board and chilled.  With the weather being overcast, the sea was choppy so I doubt if much would have been seen below water.  When they arrived back on board, they confirmed things were murky so we made the right decision, again!!!

We weighed anchor and headed towards Bartolome Island, observing the odd Manta Ray, a Whale, several Turtles and a few Dolphins on our way, we also enjoyed a leisurely lunch as we don’t have another activity ‘till 1430hrs when we were due to go snorkelling off a sandy beach.

Bartolome is a very bleak island, very little vegetation just looks like volcanic rock everywhere, not pretty like most of the other Islands in Galapagos but with a high peak and a light house on top. 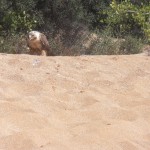 discovered a Sea Turtles nest and was dining on the baby turtles, very sad but that is nature; it keeps the food chain going.

Christine and I, yes I went snorkelling this time but was the only one without a wet suit but I have to say the sea wasn’t too cold.  We stayed in for about ½ an hour, saw several kinds of fancy fish and also a small sea snake slithering along the sea bed, I managed to video it as well!

Back to the boat for a shower etc then back into the dingy for a short boat ride to see if we could spot any penguins.  It is quite funny, not only does Galapagos have the only giant tortoises in the world; they also have the smallest penguins in the world, quite a contrast, anyway we spotted several which made our day.

We were now due to walk up to the top of the mountain (mentioned above), 375 steps to 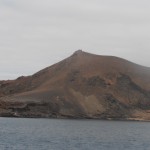 get to the top and when we arrived, we would have a good view all around.  This trip has been go, go, go, and both Christine and I were still knackered so declined to walk up; after all we have been up to Shirley Heights in Antigua many times, and we don’t think there are many better views than that, so stayed on board and enjoyed “Pina Coladas” for me and Red Wine for Christine soaking the sun that had now come out.

When everybody returned, we had our normal briefing followed by our evening meal, again very good.  This was followed by a stupid game around the table that had us all in fits of laughter.  The party eventually broke up around 2130 hrs as we have to be “up-and-at-em” for 0630hrs to view Flamingos.