We retraced our steps to Nottingham, and next morning, we’re joined by Marian at some ridiculous hour, so we left 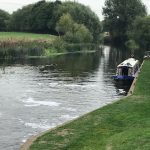 Meandering on the River Soar

Nottingham, and travelled back to Trent Lock but this time going into the River Soar, where we had arranged to meet Leisha and David for an evening meal. We stopped at Kegworth, only to 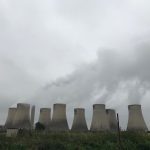 find the pub we were going too did not serve food on a Tuesday, so we had a couple of drinks on Foggy Notion, and made a plan, sadly David had to turn 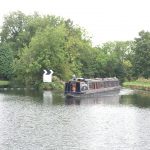 around, so he reversed down the river until he could make the turn, a very professional job he did as well. We then travelled onto the next lock, and 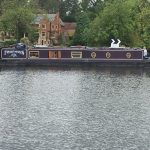 Foggy, happy days spent on her

moored at the Rose and Crown in Zouch, where we all piled into the pub and had drinks. Things as usual carried on, so instead of having showers and changing for dinner, we all stayed 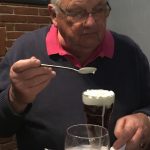 Geoff with his slimming pudding!

scruffy, except Leisha, who had managed a change before we met up! Mind you the pub did not warrant anything special, but we all had a lovely meal, a few wines and beers, and returned on board, after a great fun night.
Next morning a cooked breakfast was called for, so we all enjoyed 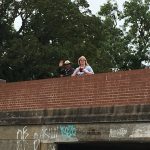 Leisha and David waving us off..

another meal, before saying our farewells again, what a laugh, until the next time…..
Back on board we departed, and had a long trek to Birstall, Marian helped me with the locks, and we soon completed the ten locks and the thirteen miles, we arrived at 5.30ish, found a mooring and had a well earned drink in the White Horse, which was very close by. I had cooked a roast dinner, so when we got back on board we had dinner played a couple of rounds of Phase 10, before Martin arrived to collect Marian, another lovely couple of days.