After an enjoyable though rather heavy night, we woke and out of the hotel about 0915; not bad considering!!!!!

Accross the road from us is a sort of Chinese food place, “Ashley’s Fine 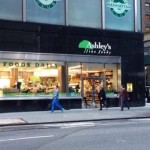 The Outside of Ashley’s Fine Food

Foods”, can’t quite call it a restaurant or a food shop, it seems to be both.   There are big gondolas with either hot or cold food, a counter splits the types of food, and normal supermarket type shelves with other foods for sale.  You go in, decide if you want to take out or eat in, then get the applicable container/plate. Help yourself to whatever takes your fancy, and it is not only Chinese 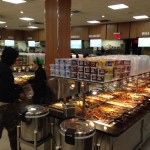 food, then take your plate to the till where the cashier will weigh it and charge you accordingly.  All the fresh food is sold by weight and the cost per lb is the same Accross everything: it works very well and we had a cooked breakfast this morning, as well as dinner last night 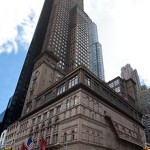 before we went partying.

After breakfast and feeling Refreshed, we went to the bus stop to catch the bus and met up with a Canadian couple

we had talked to yesterday.  We had decided to change onto the blue route which went to up-town Manhatten, but change again half way round and catch the bus that goes to the Bronx.  The other couple didn’t have a clue what to do and asked if they could tag along with us, no problem we said and off we all went.

Again it was very cold, dry but cold and being on top, had the extra wind chill factor; a good job we had our thermals on.  We made the bus changes ok, everything seemed to go 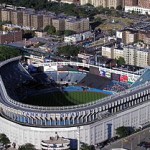 well. We drove through the other half of Manhatten, through Harlem and Accross  the East river into the Bronx, stopped outside the Yankee Stadium, (a major Baseball Club) for 10 minutes but being New Years Day, everything was closed so couldnt look around it, no loss there for us!!! Then back to The Grant.

Tomb (General in civil war, later President) where we changed back to the up-town bus. I have to say, this end of Manhatten isn’t so exciting, as the Downtown area though I am sure there is a much more community spirit around here. 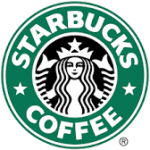 interesting.  An example: 1 Guide told us there were 283 Starbucks Coffee Shops in Manhaten.  That got me thinking, how many so and so’s  are there, so I looked these up and here are a few interesting useless facts about numbers in Manhattan alone. 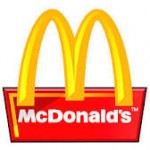 One irritation being on these buses is the constant (what amounts to begging,)  reminder that the guides and drivers are in the service industry and rely on tips to make a living; whether you are on for only 1 stop or the complete route, they want money, needless to say, I didn’t oblige.  I think the cost of this ticket is so high that they can afford to pay reasonable wages, so there.  Occasionally there has been a very imformative, helpful, happy and entertaining guide so I have dug into my wallet but many only do the job they are paid to do, hence no extra.  The other thing is how officious many of the companies employees seem to be OR maybe they are just New Yorkers, who knows.

Back to Central Park and another change, this time the Downtown bus which we caught virtually immediately only to go 2 stops then be told we have to get off and catch another bus which will be about 50 meters down the street. When we asked why, we were told it was their bpreak, ugh!!! We found yesterday, and were finding out again that their logistical organisation is rubbish, they certainly don’t use their buses very effectIvey many run empty, not in service going to, or from their break, real jobs worth people, perhaps I will have a 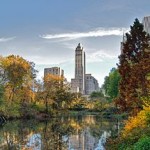 say on trip advisor about this!    Anyway, we caught the next bus that came along.

We were heading for the pier to catch the hop-on-hop-off ferry but time was running out and they don’t run late so decided to go to ground zero, see the new World Trade Cenre Tower and the memorial fountains.  We arrived and the area was heaving.  The new tower looked very impressive but the memorial fountains were switched of due to the cold weather, though the 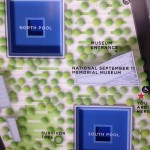 area is very tastefully done.  We then went to the 9/11 tribute centre looking at the personal artefacts found and reading the harrowing stories about that fateful day, it was very moving and brings back in spades that no one knows what is around the corner.  We would also have liked to go into the memorial museum but firstly there were long queues and after going round the tribute centre I 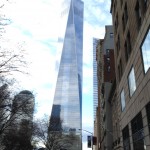 don’t think we could have taken any more sadness.  It was dark now and getting late and the last bus wasn’t too far away, so headed to the bus stop.

We were first to arrive at the bus stop and there was a bus waiting, wrong, out of service. Soon after we arrived many more people came 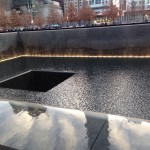 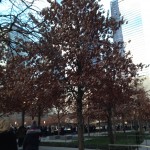 line and move to the back of the pavement.  Another bus turns up, this one from the Brooklyn route, empties out its passengers the majority join our queue, then that bus goes, break time!  So now two empty buses have gone away, the queue is very long, it is cold, dark and getting late and no buses.

After quite a considerable time a bus arrives, by now there must be about 50 people waiting but this bus can only take 16? We were lucky as we were at the front of the queue though several 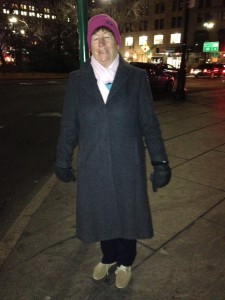 A Cold Christine waiting for the bus

tried to get on in front of us, they didn’t manage it!!!!!  How long the folks left behind had to wait, I have no idea but their frequency is every 20 minutes.

We had a Chineese Guide and I don’t think anybody could understand her, then the communication system went down yet she didn’t know and kept chatting away into the microphone, nobody told her until she stopped and walked down the bus, probably because no one was listening, maybe I am being to harsh, but I must say the actual bus tours are enjoyable, you see and hear a lot about the various places but their organisation skills are non existent; yes I will put something on trip advisor, it may help improve things a little.

Off the bus at our hotel stop, we walked in the other direction and found a small restaurant and enjoyed New York Pizza, very nice , then back for an early night.  Tomorrow is our last full day and we have our Circle Line Tour to look forward to.