Up and at ’em fairly early, debated the many choices of things to do and settled on the big 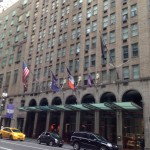 The Front of our Hotel

bus tour, there are several outfits operating this service but the one operated by Gray Line Sightseeing stopped just Accross the road from our hotel, so dressed  AND before

Christine even had a cup of tea! We were outside and blow me a bus just arrived so paI’d for a two day pass and jumped on: no tea, or coffee or even breakfast however, the ever resourcful Christine had nobbled two cakey sort of things from the Amtrak lounge, for a rainy day!!!! The only issue is these buses finish around lunchtime today by order of the Police as they had to close down the area 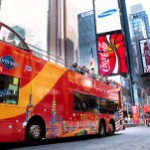 around Times Square and Broadway, however the lost time can be added on at the end.

We boarded OK and the guide gave us a couple of those Poncho Pack-a-macs  to put on the wet seats. Whilst Christine was doing this, the bus started and I sort of fell into my seat, unfortunately Christine had her hand in the way.  Panic struck, in the process of me sitting awkwardly on her finger, I 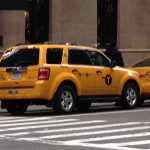 The Yellow Cabs are much Smaller these days

squashed her engagement ring and the diamond fell out, as I said panic, we were looking and grovelling but fortunately found the said lost item: a job for Pickets & Purserse upon our return.

We decided to do the complete tour as normal and then decide what we want to hop-off and do and see, but there is so much to do and this bus tour operator has 4 different buses routes, all covered by our one ticket.  Me thinks another trip to NY is called for.

We did the full tour, passing through the usual suspects such as Central Park, Wall Street, Fith Avenue, Soho, Grenwich Vilage, Ground Zero, Little Italy, The Empire State Building, (there was about a 3 hour queue to go up as we passed this building) China Town and battery Park etc., but by the end we were cold, so returned to our Hotel and donned Thermals etc.

Back on the Bus knowing it was the last we got off to the nearest stop for the Circle Line Pier.  Circle line do boat trips around Manhatten and one in particular, all around Manhatten.  We walked the 6/7 blocks, yes distance is all measured by blocks: the city is all built in very square blocks of shops, offices or apartments with all roads running at right angles to each other.  Anyway arrived at the pier but they only sail around at 1200 so couldn’t go, but booked two tickets for Saturday.

On the adjacent pier is an old WW 2 aircraft carrier, USS Intrepid, that is now a museum so decided to go over her instead. 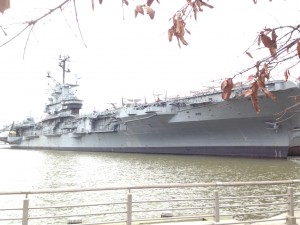 Massive is all I can say.  On her flight deck were an array of aeroplanes that were used on 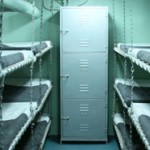 he throughout her carrear. She was completed in 1943, soon after the Japs bombed Pearl Harbour and was finally de-commissioned in 1976.  This ship has quite a history, that’s probably why she is a museum!  She saw a lot of actin agains the Japanese and suffered 5 Kamikaze attacks, one of which was very nearly fatal. She served in the Korean war, Vietnam, Cold War in the Eastern Mediterranen ready to pounce on Russia should they a attack! And laterally was involved in 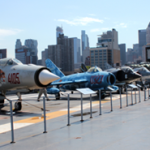 The Flight Deck now as a Museum

recovering space capsules after they had orbited the world.  Over her lifetime 50,000 sreved aboard and they lost a total of 270 after the attacks in 1945.o 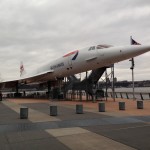 Attached to this Museaum was a retired BA Concorde on loan from BA; do they think she might fly again!!!!!!! One could go aboard (for a few dollars more) but we were too late. There was also a Submarine, USS Growler, she didn’t see any action but her role in life was a guided Misile launcher and she spent her

years, 1958 to 1964 patrolling the North Pacific, keeping an eye on the Russians as well.  The reason for such a short career was she became obsolete very quickly with the speedy development in Missile Technology, Polaris etc. 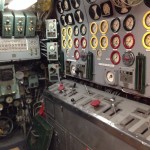 It was getting dark when the left and the Museum closed.  It was too far to walk back, well we had been on our feet all day so hailed a yellow taxi.  We had to cross Manhatten, right through the Broadway/Times Square area but 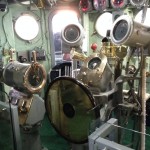 The Helm of USS Entrepid 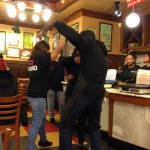 Staff at the Cafe we had our wine, Partying

by this time the Police had locked down much of Manhatten, the traffic was gridlocked, people everywhere and Police in their hundreds patrolling and observing and not helping the traffic.  With the meter running, and us going nowhere, we paid, got out and walked.  Each street corner there were barricades with police checking bags and not allowing anyone through without some sort of reason for being in the area, e.g. In our case we had to go through these barriers to get back to our hotel.  We walked about 6 blocks and were challenged at everyone.  Apparently our key card will allow us back into the area.  The authorities are expecting 1 million people in and around Times Square tonight. 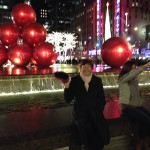 for a quick drink before leaving. It is a half hour walk to Times Square so lots of time, in fact we were going to stop en route at an Irish Bar.

We started walking then at the second Cross roads there was a large crowd: Police had barred all traffic 4 blocks out from Times Square the pavements were also barred with small access gates for those revellers who had the required passes.  Apart from Christine having her ruck sack searched and we were both scanned, our room key cards got us through this check, which we thought was the only one: wrong!  At the next block, the 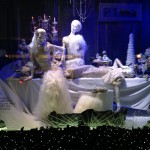 same again only this time they were more careful checking hotel key cards, we then arrived at the next one, but this time there were many people trying to get in.  The police had stopped everyone going through as they said the whole area was full to capacity.  After several attempts to persuade them to let us through, and probably to get rid of us they suggested we retraced our steps one block, turn left walk two blocks then go back up on 52 Street.  At this point I should mention we are staying at the “W” hotel on Lexington Avenue, there is also 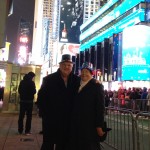 We were there to party

another “W” hotel actually ON Times Square.  We walked as suggested up 52 Street to the road block.  No one can pass they said; we showed them our key cards and asked how we could get to the “W” hotel: tough they said we would have to wait ’till the early hours when the crowds didperse at which point Christine said she needed her bed and couldn’t wait, she used the “senior citizen and female” card. The police officer said he was sorry but his boss said no one is to pass: anyway this conversation was over heard by another and the long and the short he asked one of the Policemen to “escort” yes, escort us to the hotel!  We went straight through the next 2 checkpoints with zero checks and walked in the cordoned off area set aside for the Police. The people penned in their compounds were looking at us and wondering who we were to get such treatment. 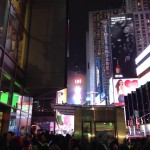 Of course we now had another issue looming.  If this Officer marched us right up to the front door of this “other” W hotel, he would have been found out we were not guests there and who knows whether the Police would have laughed or chucked us out or even charged us for wasting their time. So once we had arrived in Times square we suggested that we were OK and thanked him for his time, trouble and wished him a happy new year; fortunately he took the hint and left us, wow what a result, right in the thick of things but not in the crowded pens.  It was now 2300 hrs, 1 hour to kill but we stuck out like sore thumbs in with the Police so dived into a cafe, bought a bottle of wine and waited.  At 2250 hrs we got up to go only to be told the side door we entered by had been closed And

Staff at the Cafe we had our wine, Partying

we had to use the front door which was of course behind the cordon and Times Square couldn’t be seen.  No matter what we said to the Police, there was no way we were going through them.  Oh dear so near…………..

Meanwhile, Christine had used her charm on this poor cafe employee guarding the door and he opened it for us, well done Christine.  So here we were again, back in this very empty space looking conspicuous, when all of a sudden the doors opened from the office block alongside us and a number of people, all dressed up, came out to join us.  We suspect these folks had probably paid several hundred dollars to have this privileged viewing place, oops, if only they knew!!!!   We had a superb view, here we were in Times Square, New York, watching the Crystal ball descending on the stroke of Midnight with the tick-a-tape and a few fireworks: what could be better, another tick in the box.

After it was all over we started back to the hotel but started talking to a policeman who told us there were over 7,000 officers in the area, all leave had been cancelled and some  were armed with automatic rifels, threatening but we were all secure.  Though the checkpoints were a hinderence the lockdown was very well organised, full marks to the NYPD.

We now went to the Irish Bar, the one we  wanted to go to on the way there and the party was in full swing.  We managed to get 2 stools at the bar, enjoy several pints of Guinness and Christine pulled.  She was dancing, not on the tables I hasten to add, with some very friendly New Yorker who had also had a few.  A fine way to round off the start of the new year. 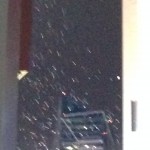 Tic-a-tape falling from the offices around

Back to the hotel and in bed about 0200 hrs leaving the New York cleansing department one hell of a mess to clear up.